September marked 1 million electric vehicles (EVs) on the road worldwide. This is an incredible number that demonstrates the growing popularity of EVs around the world, but to to slash greenhouse gas emissions in the transportation sector, this number needs to grow exponentially and fast.

This week we at Sierra Club, Conservation Law Foundation, and Acadia Center released a new report called CHARGING UP: The Role of States, Utilities, and the Auto Industry in Dramatically Accelerating Electric Vehicle Adoption in Northeast and Mid-Atlantic States that demonstrates just what the Northeast and Mid-Atlantic need to do to put the pedal to the metal on EV adoption. The report makes clear that "some northeast and mid-Atlantic state government agencies, electric utilities, automakers, and auto dealers are already taking important actions to accelerate EV adoption in the region. However, to have any chance of meaningfully slashing air pollution and climate disruption, much more is needed in each state in the near-term, and all...need to act boldly."

The infographic below shows while there are currently only about 30,000 plug-in cars on the road in the 11-state regions focused on in the report, six of the states have collectively committed to get 1.7 million on the road in 10 years, and if we added the states in the regions that haven't committed to EV adoption (but should), that brings us to 3 million EVs on the road in the northeast and mid-Atlantic by 2025. The difference between 30,000 current EVs and 3 million needed EVs in 10 years is vast, but we've made an important start -- reaching this goal will take aggressive action, but not rocket science. 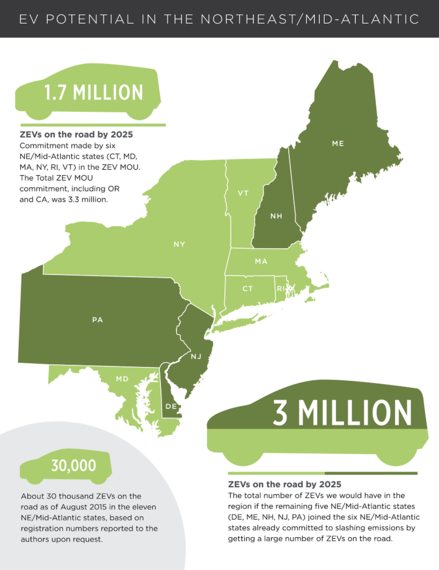 To see a larger version of the graphic click here.

"Charging Up" compares state actions to increase EV use to look at best practices for increased EV adoption. Below is a chart that shows how the eleven states stack up by comparing their progress on some of the most important EV policies and programs. 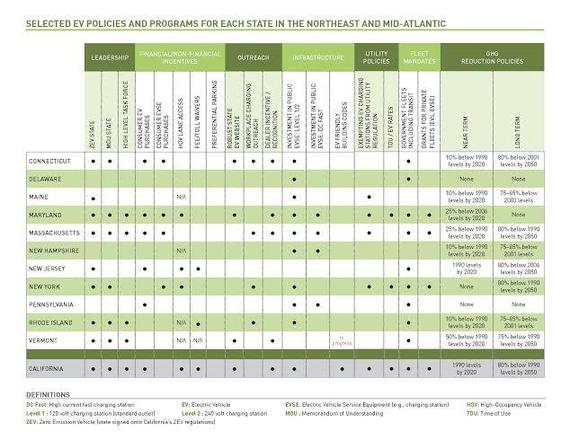 To see a larger version of the chart click here.

The report includes a list of "Nine Vital Steps for Success" offering recommendations and powerful examples states, auto companies, and utilities can follow to ramp up EV adoption and reach three million EVs in 10 years.

1. High-level task forces or commissions to provide state-level leadership and coordination.
When the parties with an interest in getting EVs on the road work together to provide strong leadership in their states, the results speak for themselves. We've seen states like Maryland, Massachusetts, Rhode Island, and Vermont enact meaningful EV policies through task forces, which include people from a range of infrastructure, transportation, and advocacy groups, utilities, and auto companies working together with high-level government officials with the authority to put policies in place.

2. Consumer incentives to make EVs less expensive and more convenient.
Making EV purchases manageable falls on both automakers, which can offer favorable financing and leasing--as well as direct incentives to dealers--and policymakers, who can make buying an EV more straightforward and appealing by offering rebates and other upfront incentives, such as carpool lane access. Massachusetts, Connecticut, Maryland, and Pennsylvania have rebates in the form of a check or immediate discount of $1,500-3,000. These states should ensure that funding for these rebate and other incentive programs are not only secure but well-publicized for consumers. Other states should follow their lead and find ways to offer rebates and other incentives.

3. Programs to make EVs more accessible to low-income residents.
Low-income communities often bear the brunt of environmental hazards; substandard air quality in the high traffic areas where low-income residents often live causes higher rates of respiratory illness. Conversely, this also means that low-income communities have the most to gain from reduced air pollution that comes when vehicles running on dirty fuels are replaced with zero-emission vehicles. California is pioneering a couple of EV programs for low-income residents, and all northeast and mid-Atlantic states should look to these models and create their own programs. But the benefits of EVs extend beyond personal vehicles. Zero emission public transit buses make green transportation and its benefits available to a wider population.

4. Utility programs and investments that incentivize EV adoption as part of a modernized grid.
Utility companies have significant power to affect how quickly EV adoption grows. Smart rate plans encourage drivers to charge at low-use hours (e.g., while sleeping, just as you might charge your smartphone), which increases fuel savings for the individual, balances energy usage load, and could bring electricity rates down for everyone. On a broader scale, we'll see the greatest benefits of switching to EVs if utilities pursue policies together with plans to promote widespread clean energy resources. Utilities can also get in on infrastructure projects, as we've seen in California's with, for example, San Diego Gas & Electric plans to build new charging stations across its service territory. Utilities, regulators, NGOs, and policy-makers in all 11 states in the northeast and mid-Atlantic have a great opportunity to move forward on large-scale EV utility programs.

5. Policies to promote widespread availability of consumer-friendly charging stations.
Policymakers can make charging infrastructure more accessible by minimizing the cost of installation through amended building codes, and by incentivizing the construction of new stations. Of the 11 states included in the report, only Maine, Maryland, Massachusetts, and New York have passed policies clarifying that entities providing electricity for public EV charging in their states do not need to be regulated as if they were utilities. This makes it much easier for companies, businesses, and universities to set up charging stations. All the other states should follow suit.

6. State and local governments lead by example by integrating EVs into their fleets and other programs.
State and local government agencies manage thousands of vehicles in their fleets. All but two states (Maine and New Hampshire) in the northeast and mid-Atlantic have some sort of EV fleet programs, but all can and should scale this up significantly. This applies to more than just buying vehicles--governments are workplaces, too, and can provide workplace charging and EV education for their employees as well as grants to businesses to offset the costs of EV chargers.

7. Increased efforts by automakers to manufacture EVs that appeal to a broad range of consumers, and to market and sell them aggressively in and beyond California.
When consumers buy EVs, they love them. In the last few years, two of the cars in the U.S. with the highest customer satisfaction ratings have been plug-in vehicles --the Tesla Model S and Chevy Volt. However, too often automakers fail to capitalize on consumers' enthusiasm for EVs: several of the most attractive EVs are currently only sold in California and a handful of other states. Especially outside of California, car-makers provide very limited marketing and dealership incentives to sell EVs. Consumers are eager for these cars, and automakers should work harder and smarter to sell them.

8. Auto dealership programs that promote EVs.
Dealerships play an important role in how quickly consumers are switching to EVs, but frequently they fall short --little to no EVs in stock, EVs kept in the back, and salespeople often knowing less about EVs than their customers--these conditions are unfortunately common in dealerships across the country. Clear research shows dealer best practices for selling EVs, including salespeople using EVs as their daily vehicle, outreach to local community groups and businesses, and having multiple EVs in stock at once.

9. Public education and outreach to ensure the vast majority of consumers view EVs as a viable and desirable option.
Most people in the country don't know about the differences among full battery electrics, plug-in hybrids, conventional cars, and hybrids. The decisions people make about car purchases are influenced more by what their friends, neighbors, and co-workers drive than anything else, and a great way to encourage this is to organize fun and educational community events like ride-and-drives. The National Drive Electric Week events that inspired drivers across the country each year since 2011 have generated a lot of enthusiasm. More of these public events, whether organized by community groups, government agencies, businesses, car-makers, or dealerships, are necessary to put EV excitement -and sales- in the fast lane.

"Charging Up"serves as an inspiring and practical call to action for government agencies, the utility industry, automakers, auto dealers, and advocates. We've made an important start, but it will take all of us to drive smart policies that will accelerate the market into high gear.

This post has been edited to include links to the report.