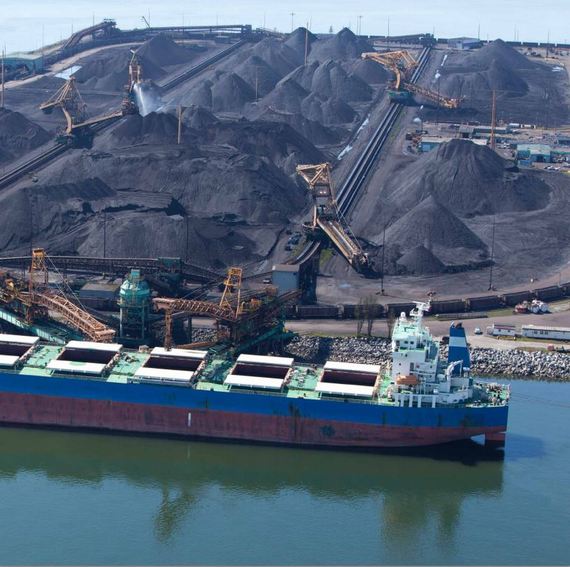 As the world's leaders converge in Paris this week to craft a deal to tackle climate disruption globally, an already-hatched trade deal, if approved, would move the world in the opposite direction.

That's the finding of a new report published today by the Sierra Club, which reveals major climate threats posed by the controversial Trans-Pacific Partnership (TPP)--an expansive trade pact recently negotiated by the United States and 11 other countries lining the Pacific Ocean.

In its more than 6,000 pages, the TPP fails to even mention the words "climate change" -- a dead giveaway that this isn't a "21st-century trade agreement," as some have claimed. But beyond making no effort to even mention climate disruption, the TPP would actually fuel the climate crisis.

Among other conclusions, our report finds that the TPP:

Let's take a closer look at each of these TPP climate threats.

First, the TPP investment chapter would give foreign investors, including some of the world's largest fossil fuel corporations, expansive new rights to challenge climate protections in unaccountable trade tribunals. Fossil fuel corporations, such as ExxonMobil and Chevron, have used such rights under past trade and investment agreements to challenge policies. Targeted policies have included a natural gas fracking moratorium in Canada, a court order to pay for oil pollution in Ecuador, and environmental standards for a coal-fired power plant in Germany.

The TPP would expand these privileges to more than 9,000 companies in the United States, roughly doubling the number of companies that could use this "investor-state dispute settlement" system to challenge U.S. policies. That includes, for example, the U.S. subsidiaries of BHP Billiton, one of the world's largest mining companies, whose U.S. investments range from coal mines in New Mexico to offshore oil drilling in the Gulf of Mexico to fracking operations in Texas.

While the Office of the U.S. Trade Representative claims to have included "safeguards" in the TPP, our report demonstrates that these so-called safeguards are far too weak to protect climate and environmental policies challenged by corporations in private tribunals.

Second, the TPP would require the U.S. Department of Energy to automatically approve all exports of liquefied natural gas (LNG), a fossil fuel with high life-cycle greenhouse gas emissions, to all TPP countries including Japan, the world's largest LNG importer.

By expediting U.S. LNG exports, the TPP would facilitate increased fracking, leading to greater air and water pollution, and increased health risks; increase the world's dependence on a climate-disrupting fossil fuel; and encourage construction of new fossil fuel infrastructure that would lock in greenhouse gas emissions for years to come.

Third, the TPP would force U.S. manufacturers to compete directly with companies in low-wage countries like Vietnam and Malaysia, encouraging U.S. manufacturing to set up operations abroad. This "offshoring" of U.S. manufacturing would not only cost us jobs in the U.S., but also increase climate-disrupting emissions. This is because production in Vietnam is more than four times as carbon-intensive, and production in Malaysia is twice as carbon-intensive, as U.S. production. This shift in manufacturing from the United States to countries on the other side of the Pacific Ocean would also increase shipping-related greenhouse gas emissions.

The TPP would further expand climate-disrupting emissions by eliminating tariffs on cash crops like oil palm, encouraging wider production in countries such as Malaysia, where oil palm expansion has played a leading role in destroying tropical forests that capture carbon. Increased oil palm production also would fuel an industry that is already rife with human rights and labor abuses.

Government officials charged with promoting the TPP typically ignore these threats to our climate, claiming instead that the pact's environment chapter would "preserve the environment." However, the chapter includes no provision that would protect climate and environmental policies from the myriad threats posed by other parts of the TPP. And while the TPP environment chapter mentions a range of conservation issues, the actual environmental obligations are generally weak and in some respects actually take a step back from environmental rules included in all trade pacts since 2007.

The Sierra Club believes that a new model of trade that protects communities and the environment is urgently needed -- one that overturns the polluter-friendly model of the TPP.

Click here to see the new report, "A Dirty Deal: How the Trans-Pacific Partnership Threatens Our Climate."