Los Angeles paid at least $204 million in fees to Wall Street in 2013, and probably significantly more, in addition to principle and interest payments, according to the report, "No Small Fees: LA Spends More on Wall Street than Our Streets." The study, issued today by a coalition of 15 community organization and unions, shows that due to revenue losses from the "Great Recession" L.A. "all but stopped repairing sidewalks, clearing alleys and installing speed bumps. It stopped inspecting sewers, resulting in twice the number of sewer overflows." L.A. spends at least $51 million more in Wall Street in fees than it allocates for its entire budget for the Bureau of Street Services.

The researchers caution that the $204 million figure likely underestimates the true amount, because under current disclosure rules, deals made with private equity companies and hedge funds do not have to be publicly disclosed. Also, because the city does not list all these fees in one centralized report, hundreds of individual documents must be reviewed to uncover the amounts. As one of the report's researchers stated,

"This is first time an accounting of fees has been exposed for a specific public entity, and we don't think we have captured it all. So if you do this for every public entity, cities, counties, school districts, states, and universities, transportation agencies and other public entities we could be looking at an astounding amount of money for education and community services money sucked out of the system."

Astounding indeed! My back of the envelop estimate, extrapolating the L.A. experience to the economy as a whole, suggests that the fees Wall Street extracts from public entities could total more than $50 billion a year -- enough to provide free tuition at every public college and university in the country.

The coalition offers the following pragmatic reforms that could be implemented quickly.

Wall Street's Catch-22
The report prompts us to ask why cities and states go to Wall Street for financing in the first place. The answer is circular. They need to raise private capital through Wall Street because state and local tax bases are increasingly constrained. Those constraints, however, are the direct result of the financialization of the economy. In effect, Wall Street creates the economic conditions that force cities and states to become their prey. Here are a few of the ways that financialization undermines the tax base. (Unless otherwise noted, the data below comes from my research, not the report's):

1. Stagnating worker wages/de-industrialization puts downward pressure on tax revenues: Worker wages have stagnated for more than a generation (see chart below.) That stagnation is the direct result of the deregulation of Wall Street starting in 1980. From that point on, financial firms found ways to extract enormous sums from the private sector through leveraged buy-outs and other devices that placed large debts on tens of thousands of American industries. To pay back all those loans, corporations switched their policies from "invest and retain" to "downsize and distribute." Worker wages, pensions and other benefits were attacked with a vengeance. 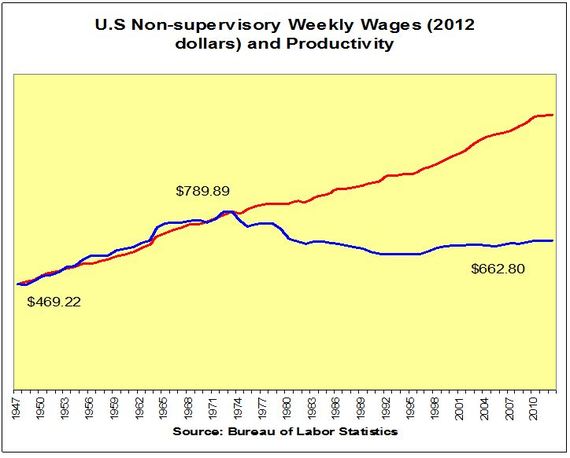 2. Wall Street incomes soar, but are sheltered from taxes: We all know that the super-rich have gotten richer as worker incomes have stalled. At the same time, the growing incomes of the super-rich are sheltered through tax loopholes and off-shore accounts, arranged of course, through Wall Street. Hence they can avoid most state and local taxes. It is estimated that the U.S. treasury loses more than $150 billion a year in taxes due to incomes sheltered off-shore.

3. Tax revenues shift from corporations to individuals: The more corporations are loaded up with debt, the less tax they pay because the interest payments are deductible. The net effect is that corporate taxes go down while individual taxes go up. But since the super-rich can shelter their incomes, the burden falls on the middle class and the poor. 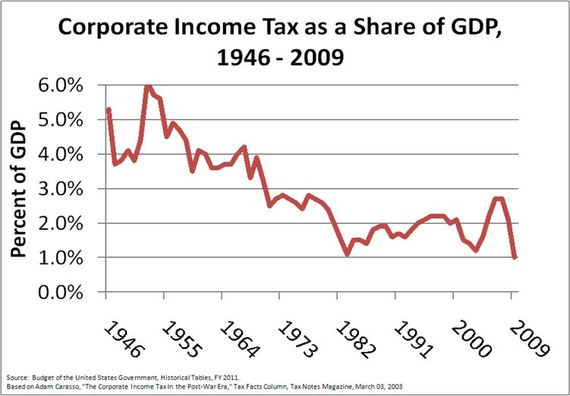 5. Tax war between cities and states give corporations more and more tax breaks: L.A. and virtually every other major city in the country, lavish developers and corporations with tax breaks in order to lure businesses away from each other. The net effect is that corporations and the wealthy pay less, and the pressure rises to cut state and local budgets. The chart below estimates those tax breaks for 2013, and shows that tax breaks and loopholes amount to nearly twice the pension fund liabilities of these states. 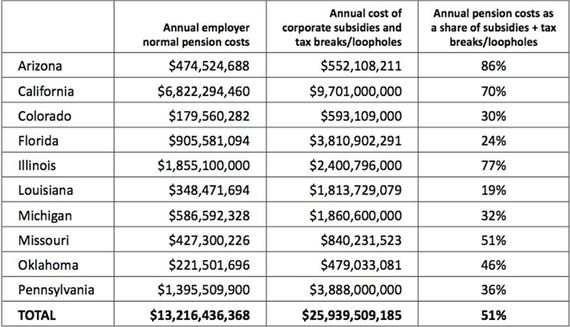 6. The rapid rise in the prison population crowds out other public expenditures: America has the largest prison population in the world. Since 1980 it has grown by nearly 400 percent. Why? Obviously the absurd "War on Drugs" plays a large role. But prison also serve as the holding pen for surplus workers in the financialized economy. Because of all the downsizing, millions have turned to the underground economy for survival. As financialization continues, we can expect prisons to continue to squeeze state and local budgets. 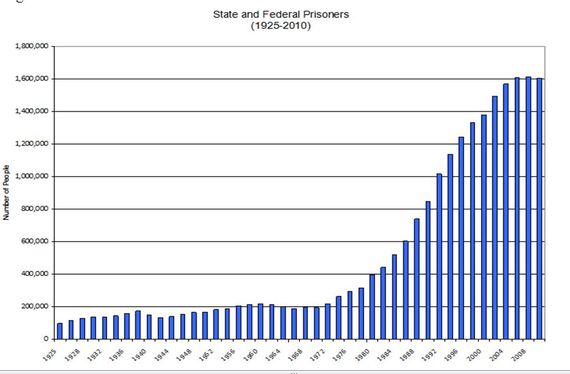 North Dakota has public bank, Why not Los Angeles?
Cities and states are dependent on private predatory banks and financial institutions -- but less so in North Dakota which has a public bank. There, state and local government can use the Bank of North Dakota as its trustee, knowing that the bank has no incentive to rip them off by charging exorbitant fees . The bank's top executives receive neither bonuses nor stock options, and earn a small fraction of what Wall Street bankers receive.

Los Angeles is ten times larger, economically, than North Dakota and could easily develop its own bank, and thereby dramatically reduce the fees extracted by Wall Street. Also, the Bank of North Dakota returns a $60 million dollar a year profit to the state from wholesale services it provides to local banks. A Los Angeles public bank should be able to add over $600 million a year in profits to the city's coffers.

Another logical solution is for the Federal Reserve to directly purchase municipal bonds from cities and states just as it is doing right now with the toxic mortgage securities held by the largest banks. Not only would that save state and local public entities approximately $50 billion a year in Wall Street fees, but also it would dramatically reduce municipal interest rate costs.

Of course, none of this will come easy. But this report lights the way. It should be repeated in city after city, in state after state, so that everyone can see just how Wall Street is impoverishing the richest country on Earth.

Les Leopold is the director of the Labor Institute. His most recent book is How to Make a Million Dollars an Hour: Why Hedge Funds Get Away with Siphoning of America's Wealth (Wiley, 2013). His next book project is why the richest country on Earth is so poor.