Back in March, I wrote a post about a phenomenon that I kind of assumed already everyone knew about. Within my organization, the Foundation for Individual Rights in Education (FIRE), we call this "disinvitation season," the time of year when -- thanks to high-profile commencement speakers -- the push by some students and faculty to get speakers disinvited gets really intense.

Media attention this year, however, has been orders of magnitude greater than in any other year, largely because some big names stepped down from giving commencement addresses in the face of protest. This trend was picked up by seemingly every major news outlet in the country, from The New York Times, The Wall Street Journal, NBC, and CBS News to The Boston Globe, the Los Angeles Times, NPR, FOX News, MSNBC, and CNN. If you didn't know about disinvitation season before, chances are you do now.

In this #longread I wanted to highlight the new research FIRE has just released about disinvitation season and about what that research says regarding the climate on campus. I'd also like to take on some of the arguments that a handful of supporters have made to justify the push to dump speakers.

The origin of "disinvitation season"

The term "disinvitation season" has been something of a dark joke within FIRE for years, but as every year passed, it got less funny. The intensity of demands that speakers be disinvited seemed to swell over time, and increasingly, we saw speakers bow out in the face of protest (as University of California Chancellor Robert Birgeneau did at Haverford College), be subjected to a "heckler's veto" (as happened to former NYPD Commissioner Ray Kelly at Brown University), or have their invitation flat-out rescinded (the fate suffered by Ayaan Hirsi Ali at Brandeis University).

However, while FIRE noticed more disinvitation incidents in the news, we wanted to verify our hunch that this was a genuine trend. So FIRE pored over every news account we could find of such incidents over the last 15 years, gathering up examples of disinvitation efforts and "successful" disinvitations (in other words, incidents in which the targeted speakers ended up not speaking). We focused on the last 15 years because FIRE is 15 years old, and we have obviously only been monitoring campus issues during that time. In addition, since the Internet was already fairly robust by 2000, we reasoned that it would be easier to detect such incidents when they cropped up (in contrast to say, the 1970s or 1980s, where paper-bound information can be harder to find).

Please note, however, that FIRE is under no illusion that we have identified every disinvitation effort that took place in the last 15 years. In addition, we are interested in compiling examples dating back through American history. If you have examples to contribute to our database, please send them to FIRE at disinvitation@thefire.org.

Disinvitation season is, in fact, getting more intense 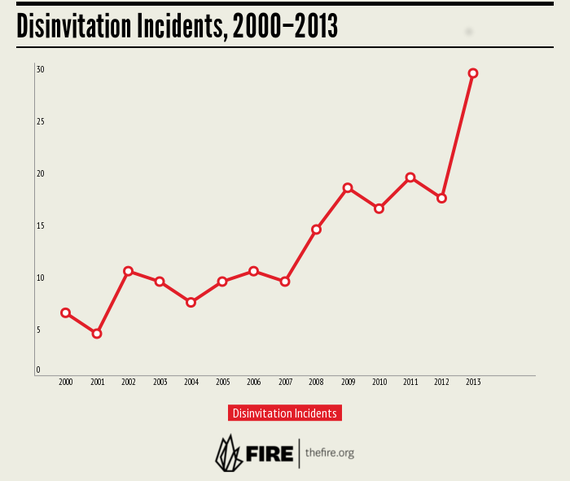 *Complete data for 2014 was not yet available
at the time of this report's publication, May 2014

So far, FIRE has discovered 192 incidents in which students or faculty have pushed for speakers invited to campus (both for commencement and other speaking engagements) to be disinvited since 2000. Eighty-two of those incidents were "successful" in that ultimately the speaker did not speak. Of those 82 successful disinvitations, 53 occurred via the revocation of the speaker's invitation to campus, 17 were from speakers withdrawing in the face of protest, and 12 were "heckler's vetoes" in which speakers were shouted down, chased off stage, or otherwise prevented from speaking.

Of those 192 disinvitation efforts since 2000, 114 have happened since 2009, when we first noticed an uptick in the frequency of disinvitation incidents. Of the 82 "successful" disinvitation attempts, 50 occurred during or after 2009. 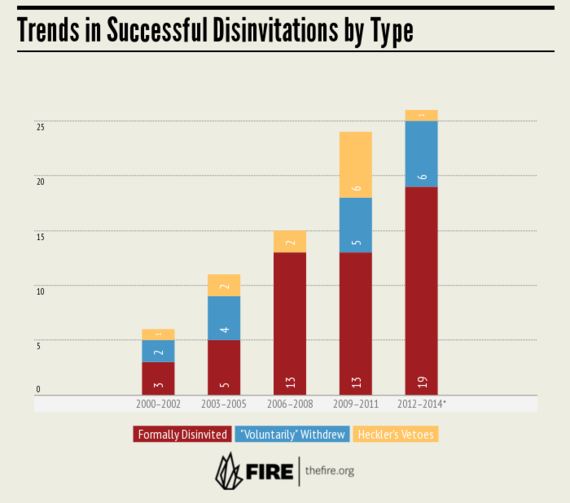 *Complete data for 2014 was not yet available
at the time of this report's publication, May 2014

While much of the coverage of the disinvitation efforts has been negative, and some of it, in my opinion, leaned a little too much towards bashing "kids these days," disinvitation efforts do have a handful of supporters. Below I address the top four most common defenses of the "disinviters" I have encountered.

1. The "I did not read what you wrote, however, I disagree with you" argument

The most common argument I've run into is the "students and faculty have every right to protest" argument. That is correct, and I've said that from the very beginning, in every article and in virtually all the interviews I have done on this topic. I have a long career of defending students' ability to protest (even their ability to protest me!). But there is a major distinction that needs to be drawn between protesting a speaker and trying to make sure they do not speak on campus. The first expresses your disagreement with your opponent; the second attempts to stop your opponent's point of view from being heard.

There is also a crucial line to be drawn between showing your disagreement with what a speaker has to say, and trying to make sure that speaker is shouted or shut down once he or she begins speaking. The latter tactic is mob censorship (lawyers call it the "heckler's veto") and is hostile to freedom of speech. If students wish to shout down speakers or otherwise prevent them from speaking once they're on campus, they should understand they're engaged in mob censorship, not free speech.

2. The "But I really, really dislike that speaker!" argument

In most of my media appearances on this topic, defenders of disinvitation efforts will take their least favorite disinvited person and focus on how evil that person is, to the exclusion of all others. Condoleezza Rice has been a favorite target for this approach, but those speakers and callers generally ignore the dozens of other incidents like this over the years. The problem is that we all have opinions, personalities, and politicians we passionately dislike, which is why there will never be an interesting candidate about whom every member of a campus community can agree.

There is also a very important and old-fashioned intellectual argument here: So what if you don't like the speaker? Does that mean they will have nothing interesting or valuable to say? Do you only learn from people with whom you already entirely agree on everything? Wouldn't that just mean you're hearing the same thing over and over again?

The reason why I am so concerned about the disinvitation movement (to the extent that there is one) is that it abandons epistemic humility (basically, disinviters assume that they know or even could know everything), scholarly skepticism, and the essential habit of any academic community of saying to itself, "Okay, let me hear this person out; maybe I will learn something."

Moreover, there is no hiding the fact that conservative speakers are much more likely to face disinvitation efforts than others, and the overwhelming majority of disinvitation efforts come from the left of the speaker, even if that speaker considers herself a liberal (as in the case of Janet Napolitano, among many others). Of course, there are examples of speakers being opposed from the political right, including former Weather Underground leader and retired professor Bill Ayers. Nonetheless, the whole picture of disinvitations accords with conservative critiques of higher education that assert that the left has increasingly become intolerant of opposing points of view. While I think this is an incomplete picture (much of campus censorship in other contexts is not particularly political), if students don't want this to be the narrative, they should stop playing into it.

3. The "Not on my special day" argument

Probably the best argument the pro-disinvitation students and faculty have is what I call the "not on my special day" argument. The idea is that commencement belongs to me; it's held to honor my accomplishments; therefore, I should not have to put up with someone whose opinions or actions I really dislike spoiling my special day. That speaker I hate can come to campus any other day of the year--just not at commencement.

I would have more sympathy for this argument if it were at all true. As FIRE and I have stressed over and over again, commencement is just one part of the problem. From 2012 to today, of the 26 successful disinvitation efforts, only 11 were commencement addresses. As I've also said over and over again, disinvitations occur throughout the year, and it is a worrisome indicator of a general intolerance for dissenting points of view on campus. Artificially trying to get people just to focus on commencement is, well, artificial. Disinvitation efforts are the symptoms of a larger problem that extends well beyond commencement.

4. The "But it was the will of the students!" argument

I am fascinated by the sleight of hand of the "but it's the will of the students that the speaker I really hate be disinvited!" argument. Generally speaking, only a minority of faculty and students so thoroughly oppose a particular speaker that they demand his or her disinvitation. For this reason, Chancellor Bowen, who spoke at Haverford's commencement instead of Chancellor Birgeneau, was right to call most disinvitation pushes "arrogant." A small number of faculty and students are essentially insisting that "not only do I not want to hear this person, you should not hear him or her either!"

The problem with this demand would be made starkly clear to the students the instant a speaker they really admired faced a disinvitation effort from other students. In 13 years of working in First Amendment law, I've found it striking how quickly people's attitudes about free speech change when they start to realize that their speech, or speech they support, could be at risk.

There are far more principled reasons for believing in an open exchange of ideas and hearing the other person out, but if the argument must be "sooner or later they will come for someone you do like," it's better than nothing.

If I had to guess, I suspect the negative attention focused on students and faculty members behind successful disinvitation efforts may slow the enthusiasm for disinvitation this year. Only time will tell. However, I see only two ways in which disinvitation pushes will truly stop.

The first would be if students were to be better educated in how to engage in constructive protest and disagreement. Rather than a minority of students and faculty deciding that speakers whom they don't like should be disinvited, they might decide to picket, boycott, or find other ways to express their disdain. Better yet, maybe some of the skeptical ones will show up with open minds and say, "Okay, I'm going to hear this person out before I decide he or she couldn't ever have anything valuable to say." The academy can and should be teaching these habits, but I'm afraid that in an age when 59% of universities maintain speech codes, they are not quite up to the task.

The second way in which disinvitation season could end would be that universities might grow increasingly leery of inviting speakers who might offend the most vocal part of their student body or their faculty. They could avoid this with structural changes, perhaps by putting speakers to a vote, or by only having the class valedictorian or school president speak (I should note that even the sitting university president isn't always an uncontroversial choice). However, if the reason for this change is that campuses have become places where "strangers" are unwelcome or where even a single point of disagreement is enough to disqualify a speaker from campus, then we're clearly failing to teach our students the values of intellectual openness, curiosity, and critical engagement that universities were always intended to foster.

Check out the full report here.