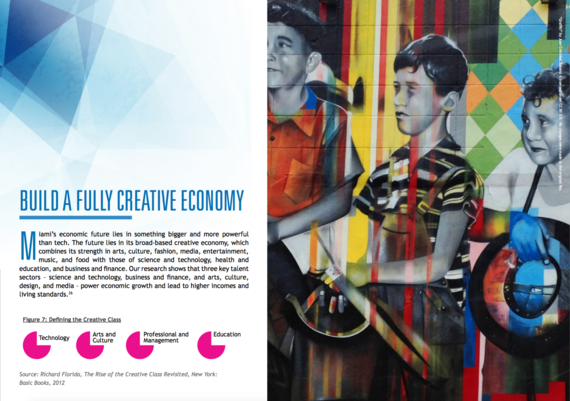 With nearly six million residents and a gross regional product topping $300 billion, Greater Miami is now comparable in size and economic power to Singapore or Hong Kong. Moreover, it is the hub of the Southern Florida or So-Flo megaregion, which extends to Tampa and Orlando, houses more than 15 million people and produces more than $750 billion in economic output, making it roughly the size of the Netherlands, one of the 20 largest national economies in the world. Historically based on tourism, hospitality, transportation, and real estate development, Miami's economy has deepened and diversified and become more creative and idea-based, as banking, media, arts, education, and even software development have come to play larger roles in its mix. Rich in talented human capital from all over the globe, Miami is by many measures the most tolerant, diverse, and welcoming place in the US.

Miami's growth has been extraordinary, but as the world-renowned urbanist Richard Florida notes in a new report, it has owed more to its geography and weather than to any conscious strategy. "Fortuity has brought us a long way," he says, "but we can no longer grow by accident. Miami has to double down on its investments and its focus on really building the infrastructure of a great global city."

A joint project between FIU and my team at the Creative Class Group, and the first product of the FIU-Miami Creative City Initiative, Miami's Great Inflection: Toward Shared Prosperity as a Creative and Inclusive Global City, was presented at the Greater Miami Chamber of Commerce's 2016 Goals Conference on June 16. Tough-minded and probing, it highlights both Miami's strengths and the very real challenges it faces as it scales to the next level. As FIU President and Chamber Chairman Mark B. Rosenberg says, it is just the beginning of a thoughtful, deep and much-needed conversation about Miami's future. Watch the highlights: