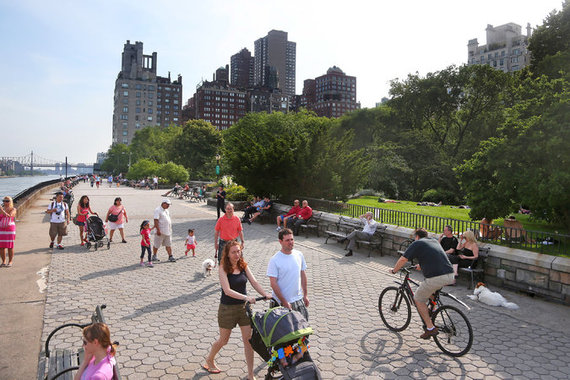 New neighbors -- this is what residents of the quiet East End of Manhattan and of the hip destination neighborhood Dumbo have in common.

While the two neighborhoods on the brink of expansion have little in common in terms of nightlife, architecture and lifestyle, they share the fear of changing culture as a result of influx of residential new developments in the area.

Manhattan's East End is a quaint residential neighborhood encompassing East End Avenue, which stretches from 79th to 90th streets along the East River. Similar to its familial residents, the neighborhood prides itself on its small-town charm tucked away from the busy city as if it were "Scarsdale in the city," as an 18-year resident of the neighborhood calls it. However, given the future opening of the Second avenue subway line only blocks from the neighborhood's main avenue, real estate developers have been building up the previously coop and townhouse-filled streets with condominiums.

However, in order to lessen the neighborhood's character changes, the incoming developments are set to embrace its existing architecture. Robert A.M. Stern's 20 East End Avenue will mirror the "pre-war façade" common to the neighborhood, incorporating a pale limestone exterior that will "fit seamlessly with [its] surroundings," according to the project's website. While residents remain concerned about the potential for increased traffic to their quaint hideaway, there is still hope for an unchanged neighborhood aesthetic.

On the other hand, the Dumbo neighborhood of Brooklyn is experiencing both a residential and commercial shift with developers building up vacant land and converting old warehouses into residential oases. With the increased retail space at the base of these residential buildings awaiting tenants, some locals "worry about the possible loss of culture," according to a neighborhood resident, while developers are looking to secure tenants who can "add some everyday energy" to the space.

Two Trees Management, credited with the creation of the trendy area seems to have the area's preservation at the top of its to-do list, incorporating art galleries into street level spaces to draw attention to the community's art scene.

Whether at risk for losing peace and quiet or artsy culture, neighborhoods and their residents embody a local flare to which they may not want to say goodbye. The question remains if the new culture will trump the past.