Part 1 of a Three-Part Series

You may have read the headlines and heard the stories: Retirement is being retired. For more than thirty years, I've been analyzing the data and trends, and I've long predicted that working in retirement would one day become the norm. Now it has. We have reached the tipping point where the majority of people now plan to work in retirement, and this later phase of life will never be the same.

To investigate exactly how traditional retirement is morphing into the new retirement workscape, my firm, Age Wave, just partnered with Merrill Lynch to complete the most comprehensive study of expectations, ambitions, hopes, fears, and challenges around working in retirement. We surveyed over 7,000 pre-retirees and retirees nationwide -- working and nonworking, from all walks of life -- to reveal the impact work in retirement has on people's lives, dispel some of the misperceptions about why people work in retirement, and offer insights and recommendations on how to successfully make working in retirement productive and fulfilling.

This is the first of a three-part series based on the study Work in Retirement: Myths and Motivations. If you like, you can download the entire study report here www.ml.com/retirementstudy.

Question: To Work or Play in Retirement? (Answer: Both!)

Nearly half (47%) of today's retirees report that they have worked or plan to work during their retirement. An even greater percentage -- 72% of boomer pre-retirees -- say they want to keep working after they retire. When we probed, our study found that some people want to work for a few more years, while others want to work until their last breath. But given the likelihood that many people will spend decades in a period of life once devoted entirely to leisure, it seems that nearly everyone will need to work a bit longer to bolster their nest egg.

Up until the 20th century, most people did not retire at all. In more recent times, retirement meant a total break from work to rest, relax, and enjoy leisure. Today, a growing number of people are questioning whether a 20+ year retirement without work or any income is practical, desirable, or affordable.

Although retirees are four times more likely to say they work in retirement because they "want to" rather than because they "have to," they want to do it differently than during their core career. They tell us they don't want to work as hard or as many hours, and they are seeking a better balance in their lives with more flexibility, less stress, and more time to play and have fun.

And it turns out that retirees who continue to work in some form report feeling far more "stimulated," "connected to others," and even "proud of their lives" than retirees who stop work completely. They resoundingly agree that working in retirement helps people stay more youthful (83%), and that when people don't work in retirement, their physical and mental abilities decline faster (66%). As one focus group participant summed it up: "If you don't work, you get old faster." It seems that work in retirement can be an antidote to aging.

This new phenomenon is driven by four converging forces:

Because this is largely uncharted territory, pre-retirees who anticipate working in retirement are confronted with many important questions about what it means to work in retirement. How can I balance work with other things I hope to do? What kind of work do I want to do? Who will hire me? Will I enjoy it? What should I do to prepare for working during my retirement years? Will I be able to find work in my later years?

"Baby boomers are once again redefining a life stage, this time retirement," observed Andy Sieg, Head of Global Wealth & Retirement Solutions for Bank of America Merrill Lynch. "As we live longer and healthier lives, older Americans are continuing to work at levels not seen since the 1960s--often doing so in new, more flexible and fulfilling ways. This new research shows that people will increasingly be seeking work during this stage of their lives, moving in and out of the workplace well into their 70s and beyond."

Retirement Continues to Change and Evolve

Whereas yesterday's retirement had only two phases--decades of work followed by a permanent transition into decades of leisure--a new generation of working retirees is redrawing the retirement roadmap to include four different phases: (1) Pre-retirement, (2) Career Intermission, (3) Reengagement, and (4) Leisure. 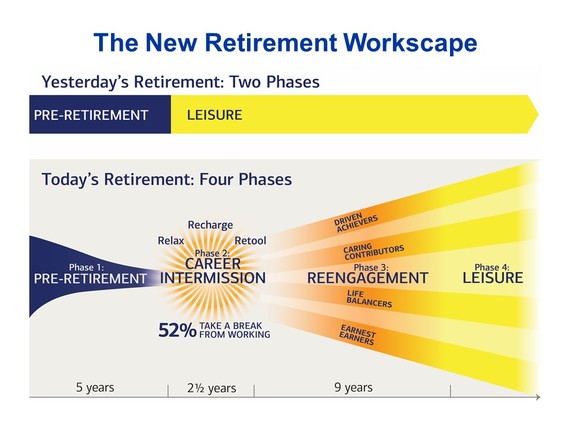 Phase 1: Pre-Retirement -- Winding Down While Gearing Up

Toward the end of the core career years, many tell us they have already begun to envision the next phase of their work life, which increasingly includes a career switch or reinvention. More than half of pre-retirees who want to work in retirement say they will actively take steps to dream up the next chapter in their work life. Those steps might range from talking to family members to seeking out new business partners.

It seems that people don't want to move directly from their core career to working in retirement. Instead, they feel they need a break--a sabbatical--a good chunk of time to deeply relax, recharge and retool. More than half (52%) of working retirees report taking a break from work when they first retired.

As one focus group participant told us, "It was similar to when I took time off from work when my children were born. I just needed a few months before re-careering in retirement. However, my best friend needed four years. There's no secret formula. It's very individual." Although the length of this recharging period varies based on individual needs and desires, the average career intermission is now 29 months.

After a career intermission, growing numbers of retirees begin the third phase of retirement: Re-engagement. As one focus group participant told us, "It took several years of retirement before my bucket list started to empty. Then I just got bored, missed the stimulation, and really wanted to go back to work."

What's particularly revolutionary is how these retirees are working: They told us it's a chance to work "on your own terms." They generally don't want to work as much, or as hard -- or even at the same thing they used to do. They see it as an opportunity to pursue entrepreneurial ambitions or to use their skills to give back to their communities or worthy causes.

Compared to their core careers, people in the re-engagement phase are nearly five times more likely to work part-time (83% vs. 17%) and three times more likely to be self-employed (32% vs. 11%). They told us that after a lifetime of work, they felt they didn't need to prove anything to anybody and are now more interested in crafting a better work/leisure balance. And guess what? These new retirement FlexCareers are a very achievable goal. Working retirees overwhelmingly describe their new careers as far more flexible, fun, and fulfilling -- and less stressful or boring -- than their pre-retirement careers. 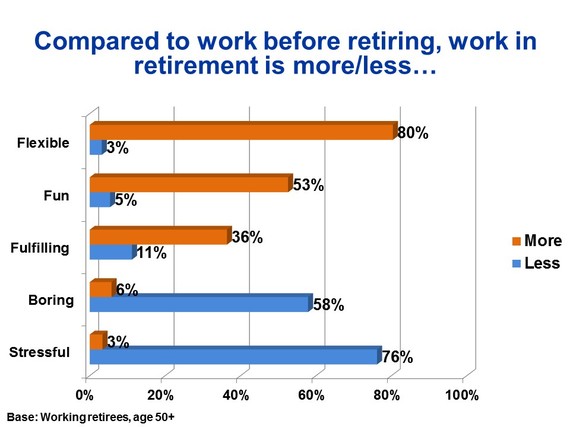 Phase 4: Leisure--There's Plenty of Time to Kick Back and Smell the Roses

With longer life comes a longevity bonus. After working a bit longer, and with any luck on a more flexible schedule, there are still years -- and possibly decades -- for the traditional leisure phase of retirement. In this final phase, retirees want to (or need to) stop working completely, and they view this time in their lives as a much-deserved time to relax, travel, enjoy time with family, and focus on other non-work priorities.

Stay tuned. In the next blog in this series (posting tomorrow), I'll describe the four different personality profiles of working retirees and discuss what makes these pioneers in the new retirement workscape tick.