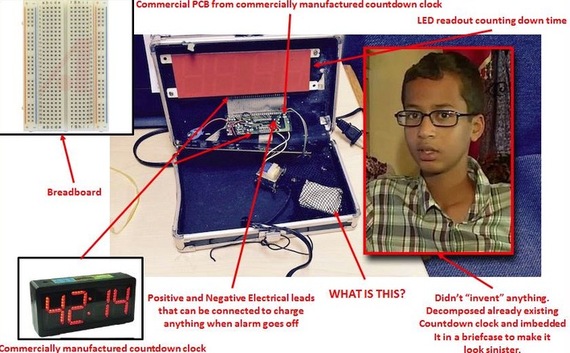 My last post got a flurry of attention from many who agreed with Bill Maher's observation that Ahmed Mohamed's clock looked like a bomb, and his follow-up: "He didn't invent anything!" A lot of the comments, like a lot of what's been floating around the web, claimed that anyone who'd brought such a suspicious-looking package to school should have been carted off in handcuffs, and that a smartypants like Ahmed surely would have known that. From there, speculation naturally followed as to what the 14 year-old's real, likely nefarious motives were. Remember: we're talking about a kid who may or may not even really understand the difference between inventing and "inventing" something here. Nonetheless, I'd say pretty much all of the online critics would agree with "Real Liberal" Maher's sentiment that lesser liberals who have "glommed onto" Ahmed The Evil Genius as a "mascot" are "ninnies."

Putting aside for the moment that this liberal ninny would rather stand with Ahmed than lie with Kim Davis any day, this is not really about what Ahmed did, since whatever it was was neither illegal nor threatening enough to trip any real alarms. It gets less and less about Ahmed as time goes on and those determined to prove his nefarious intentions keep beating a dead horse. When even Irving police Chief Larry Boyd concludes, after an official investigation of the incident, that there is "no evidence to support the perception [Ahmed] intended to create alarm" it's time to put the case to rest. Instead, the right-wing smear machine, in full-throttle Jade Helm Conspiracy Mode, is digging up anything on the kid and his family they can find, and Maher is digging right in with them.

Sure, we liberals have our conspiracy theories, too (I mean, was Carrie Bradshaw really just a lonely troll whose "Sex and the City" exploits were one big masturbation fantasy?), but it never ceases to amaze me how far the right is willing to take theirs, and how corrosive they can be to human decency and civil discourse. The adults in the room should know better than to continue to bash a 14 year-old. Irving PD is to be commended for clearing Ahmed's name without delay. Had Ahmed's arrest not been vacated, it would have had a potentially very real, very long-term adverse impact. Which is exactly what adults on television and the internet still intent on smearing the kid are trying to ensure.

The thing is, even if the absolute worst that the Drudges and Breitbarts -- and the Dawkinses and Mahers -- could uncover about Ahmed were true: that, despite IPD's insistence that the whole thing was a "naive accident", this cheeky little swindler intentionally threw something together to look suspect in a plot (though not exactly a bomb plot) to expose institutional Islamophobia, in hopes that, in an atmosphere in Irving, Texas, inflamed by the recent introduction of a passive-aggressive ordinance banning the practice of foreign laws, which was clearly aimed at the Muslim community, he would get some press, maybe do a little crowdfunding, and, if all went well, buy himself a bigger clock. If all of that were true, and he was some kind of evil genius -- not at clock-making, but at manipulating liberals... so what?

Ok. What if it goes deeper? I mean, his family has a pretty shady back-story. Dad has vague political aspirations (in his native Sudan, but whatever). And then there's big sis, Eyman, who had a run-in with MacArthur High a couple years back, where she, too, was suspended, apparently out of a superabundance of caution then as well. Is it possible the whole family was in on it? Maybe the whole Muslim community of Irving, Texas? I mean, we're pretty deep down the rabbit hole already, but this could go even deeper than that.

Why jumping into a pig pile already lousy with the likes of Glenn Beck, Jim Hanson, and every anti-Muslim conspiracy freak west of Texarcana is a point of pride for someone like Maher, who will not let it go, isn't such a mystery when you consider that, to him, it's the perfect storm of his two most cherished obsessions: liberal fascism and religious extremism (and, particularly in the case of Islamist extremism, he clearly believes they feed one another). Maher is mostly fighting the good fight, but he seems to lose his sense of perspective when either of these comes into play, however minimally. He easily pivots from one to the other. When called out on knee-jerk Islamophobia, he blames liberal ninnies. His confirmation bias kicking in, instead of seeing some naive kid getting literally taken for a ride downtown, he sees naive liberals, afraid of offending Muslims in their midst, getting taken in by some cheeky kid with a couple of aces up his sleeve.

Now, I used to get a little bent out of shape when my #blacklivesmatters friends called out liberal allies for implicit bias. I'm as sick of hearing "check your privilege" as the next white guy. I mean, ugh, can I get a ticket or something to show you I checked it at the Privilege Check up front? But here's the deal with that: the nation really does have a serious problem with White Nativism, and all its attendant isms and phobias. It's clear Maher's major beef is with what he sees as political correctness on the academic left, a fringe of such staggering insignificance in our public and policy discourse it might well be a figment of his feverish imagination. And right now, nativism and all its nasty offshoots is a problem that far outweighs any personal issues you, me or Bill Maher might have with a few liberal fascists at Berkeley or the ladies of The View making a little noise now and again. Humor them. The idea is that we might look up the power structure and question why everyone is always looking down. Or, heck, go after them (they love the attention!) but, NEW RULE: stop slagging off a socially awkward 14 year-old boy on national television. It's not nice, and it's not normal.

It's not easy to confront our implicit biases, of course, and no one should be condemned for struggling with aspects of intersecting identities outside their own experience. What the liberal commitment to a diverse open society requires is a willingness to travel outside our comfort zone. Daily. And let's be real: it doesn't take much courage to concoct conspiracy theories around a fourteen year-old's perhaps ill-conceived but very far from criminal actions. And we have so much to gain as a nation by rejecting the divide-and-conquer scare-tactics of that nativist lot, it's worth the minimal risk of extending a curious adolescent the benefit of the doubt, don't you think?

Lookit: we have a presidential front runner who has founded his campaign entirely to this point on casually degrading people based on their gender and nation of origin, and his nearest competitor in the primary proudly traffics in open and unapologetic Islamophobia. In an era of such pervasive paranoia, in an election year where it's whipped into a frenzy, you've really got to choose your battles. Sometimes even a "real liberal" like Maher needs a gentle reminder: Trump & Co. are a much bigger threat to America than Ahmed & Friends will ever be.