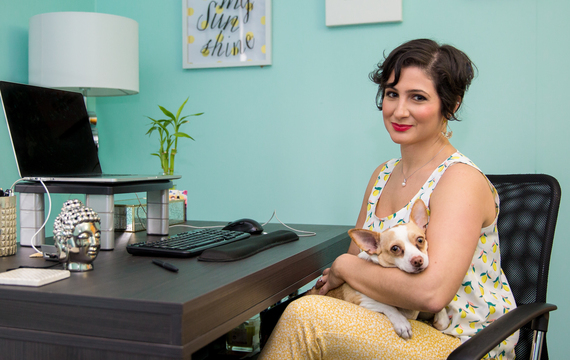 At some point in our childhood, everyone becomes aware of the unfortunate fact that evil exists in the world. For some, this realization is much harsher than for others. That was certainly the case for Helaina Hovitz, a New York native who experienced the horrors of 9/11 firsthand from her elementary school in Lower Manhattan.

Hovitz, then 12, dealt with many years of undiagnosed PTSD after that day. She has penned a memoir, After 9/11: One Girl's Journey Through Darkness To A New Beginning, due out September 6 from Carrel Books, about her recovery effort, which lasted for over a decade.

Hovitz--like many of her classmates--felt re-traumatized in the weeks and months after 9/11 as the events of that day were played over and over again on the news. Coverage of other negative events on the news also led to stress about other events beyond Hovitz's control. "Our current media landscape focuses too heavily on crime, terror, and everything else that's 'wrong' with the world," she says.

Now 26 and a veteran writer, Hovitz is doing something to help spotlight the efforts of people who are trying to create a better future. Six weeks ago, she and a small team of other award-winning journalists and producers launched Headlines For The Hopeful, a digital news service focused exclusively on sharing positive stories.

"People are becoming increasingly concerned with the welfare of the planet and those who live on it, but it's not always easy to track down meaningful stories. That's what inspired us to create a platform that brings these stories together in one place," she says. "I'm definitely not a business woman, but I'm learning as quickly as I can!" the new co-founder adds.

In its first few weeks, Headlines For The Hopeful has spotlighted dozens of amazing non-profits and initiatives aimed at helping solve everything from poverty to illiteracy. "Our belief is there is a strong demand for accurate information--free of religious affiliation and political partisan leaning--about the ways in which we can positively affect the lives of others and improve the welfare of our planet," Hovitz says.

Hovitz answered more of my questions about her new venture over iced tea at Manhattan's South Street Seaport, not far from where she grew up.

Hodak: Tell me more about Headlines for the Hopeful and how you're currently operating.

Hovitz: Firstly, it's amazing what you can do from different corners of the country! Charlie Towne is my Co-Founder and our financial backer, and on our digital team we have Linda Hernandez and Terry Turner, who are incredibly talented, Emmy award-winning producers and journalists. We are all so passionate about what we're doing here, and I think you have to be, since both the startup world and the media world are such risky ventures. In addition to "print" digital news stories, we're creating really awesome original videos for social media and are about to expand to create our own "broadcast" style video coverage as well.

The site has been live for about six weeks, but of course, about six months of planning and development went into it before then. Based on the numbers we're seeing, and given that all we did to spread the word was use social media, I have high hopes for our growth.

Who is your prime audience?

Our audience, essentially, is looking for more than just "fluff" pieces about animals cuddling or someone winning the lottery and buying people presents, and doesn't really want to read negative stories about what's not being done to help find solutions to today's social issues. Our belief is there is a strong demand for accurate information about the ways in which we can positively affect the lives of others and improve the welfare of our planet.
What are you working on now beyond the ongoing content needs for the site?

Right now, we just need to find a way to keep ourselves going in terms of funding. We have a lot of ideas, and Terry has done a ton of research that shows why our site is perfect for brands and companies targeting millennial consumers who care more and more about where the spend their money.

At what point did you decide you were going to start this news organization and dedicate yourself to good news?

As a child, I knew I wanted to become a journalist, and the interesting thing is that, while I already had PTSD, it's actually found incredibly frequently in journalists, due to the nature of the job.

When I was 18, I was given the opportunity to cover a story for the local paper about a teacher in a challenging school environment who was legally blind and only had one arm, and inspired his students to stay in school. Then, I was given the chance to cover the lives of homeless men making new starts for themselves at the New York City Rescue Mission. It was off to the races from there.

Unfortunately, though, back in 2007, there weren't many outlets or editors willing to let me write these stories outside of local papers, so I took a part time job working 30 hours a week in PR to pay the bills, and gave it away for free, contributing stories to places that would let me write about about causes, nonprofits, charity, animal rescue, and philanthropy and also reach a lot of people.

I was lucky enough to find a small team (who I worked with previously on another project) that shares my passion for bringing these stories to the masses.

What have you learned from other people's stories? How has it impacted you immersing yourself in good news?

However bad you think things are for you, there are people who have it a whole lot worse. The trick, then, is not to throw yourself a pity party over it or spiral into a depression, but think about how you might be able to help, or find out who is helping. We can learn so much from people who have overcome unfathomable conditions and adversities.

I personally may not be able to handle watching the majority of "bad news," but plenty of people may consider it useful--and, hey, sometimes, learning about certain instances of "bad news" is what inspires people to help and get involved.

There is a lot of sadness in the world, and it seems that more and more awful things are happening with higher frequency these days. But at the same time, there are so many people and organizations working to help, to find solutions, to deeply impact those who are suffering in a positive way, to help alleviate the burden we're putting on our planet, to help animals who have been hurt by people who are suffering and confused and in pain themselves. How we experience the world around us is really all about perspective.

For your own daily dose of hope and inspiration, visit HopefulHeadlines.org.