SYDNEY (AP) -- A thumbnail-sized frog with a long snout, a brilliant green katydid with bright pink eyes and a mouse with a white-tipped tail are among 200 species scientists have discovered in Papua New Guinea.

The findings were unveiled this week by Washington D.C.-based Conservation International, whose researchers discovered a kaleidoscopic array of critters during two expeditions to the South Pacific island nation in 2009.

Among the finds: 24 frog species, scores of spiders and around 100 insects including ants and dragonflies that appear to have never been described in scientific literature before, the conservation group said.

"They tell us how little we still know about the world," research team leader Stephen Richards said Thursday. "There's a lot of concern, quite rightly, about biodiversity loss and climate change and the impacts on biodiversity and what biodiversity means to us. ... Then we do projects like this and we discover, 'Hey - we don't even know what biodiversity is out there.'"

In April 2009, the scientists flew to the Nakanai Mountains of the island of New Britain, and then traveled by dugout canoe, on foot and by helicopter to a remote research area of the rainforest. There, they found scores of fascinating animals, Richards said, including a mouse with a white-tipped tail that appears to have no close relatives and represents an entirely new genus.

The team also found a strange little frog only 0.8 inches (2 centimeters) long that belongs to a group of frogs previously thought to live only in the Solomon Islands. "It was a complete surprise to find that," said Richards, who is based in Cairns, Australia.

The second expedition, in September 2009, took the team to the Muller Range Mountains in the country's Southern Highlands. The scientists discovered several new katydids, including one that jabs predators with its unusually big and spiny legs.

"The discovery of any new species is significant because it helps document the biodiversity on this planet, and, more importantly, what we can lose in the future if we don't care for our environment," said Craig Franklin, a zoology professor at The University of Queensland in Australia who did not participate in the research.

"So it's important work - it's critical work - for biologists to go out there and do these studies." 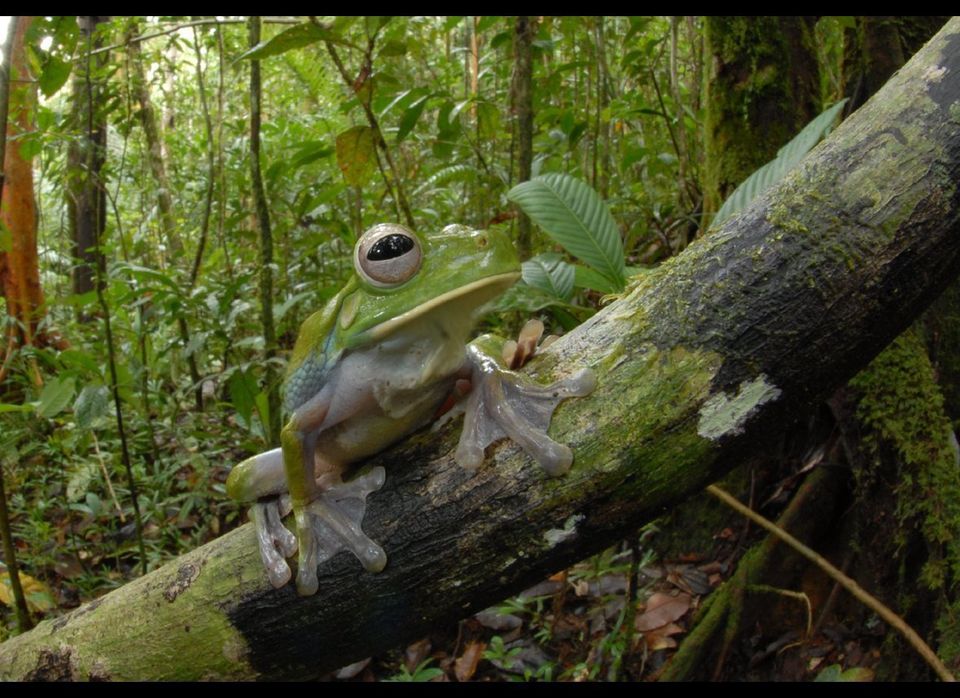 1 / 15
Potentially New species of frog discovered in Papua New Guinea (DNA analysis pending) Litoria sp. nov. Living 30 meters above the ground in the forest canopy, this large bright green frog was more often heard than seen in the Muller Range mountains, Papua New Guinea. At night males proclaimed their presence with loud, gutteral croaking sounds high above the camp much to the frustration of Rapid Assessment Program (RAP) team herpetologists Conservation International's Stephen Richards and Chris Dahl. Finally, RAP's local tree-climber proudly delivered a handsome male to them. It was the only individual seen during the RAP survey and almost certainly new to science. © CI/photo by Stephen Richards