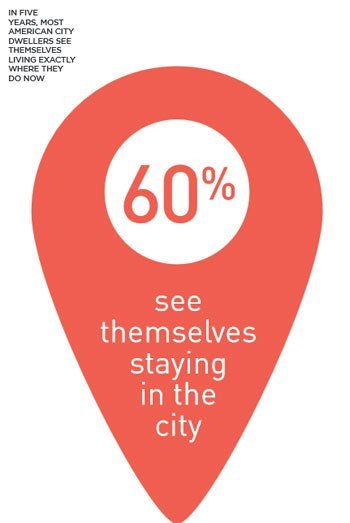 What attracts us to city life? A new survey offers some insights. A thousand urbanites - young and old - across major cities in the U.S. were contacted by Sasaki Associates, a planning and design firm based outside of Boston. The survey confirms what many of us who live in major cities already know to be true - there are so many opportunities to eat great food, see new things, and people watch, why would you want to live anywhere else? Who needs peace and quiet when you have the run of the opera, street festivals, and sports games, something different every night? But beyond the obvious, some of the numbers may surprise. These numbers can certainly help smart urban leaders continue to make city life as compelling as possible.

Here are some other highlights:

What do you love most about your city?

More than 40 percent cited the restaurants and food; while 32 percent said local attractions; 24 percent said historic places and landmarks; 21 percent said cultural offerings; 17 percent said parks and public spaces; and 16 percent said fairs and festivals. Some 15 percent said "the people," while another 10 percent said they like the architecture the most, and 9 percent said the local sports scene. Clearly, big cities can support a diverse slate of restaurants - from Afghan to Zen vegan, so it's easy to understand that culinary adventures, which are affordable, draw the most love.

And when asked, "what would get you out of your neighborhood?" the findings are largely consistent with preferences listed above: 46 would venture out for a new restaurant; 25 percent would travel for a new store; 24 percent for a new cultural event; while just 18 percent would schlep to check out a new park or green space.

Where do your favorite experiences happen?

A majority of people (65 percent) remember their favorite city experience taking place outdoors, either in a park or on a street. Interestingly, a minority -- just 22 percent -- said their favorite experience happened in a building. This is perhaps because urbanites are constantly stuck indoors to begin with.

Of the outdoor spaces, 47 percent say waterfronts are their favorite. Another 31 prefer large open parks, while 14 percent prefer small urban spaces, and 8 percent love their city's trail system the most. This explains the push so many cities have made to transform their waterfronts from industrial and manufacturing centers to the centerpieces of recreational offerings.

What makes a city's buildings iconic?

While buildings appeal less than outdoor spaces, some 36 percent said the historic nature of the building, while 30 percent said "great architecture," and another 24 percent said a building's "unique design."

A majority (57 percent) will stop and look at a historic building, while just 19 percent will do the same for a modern one. Those old buildings that have made it, that have fended off redevelopment, deserve some respect.

What do you like least about getting around in cities?

These complaints reveal how Americans, even urbanites, get around: 58 percent use cars frequently, while 29 percent use public transportation. Another 10 percent try to walk everywhere and just 2 percent use bikes.

Surveys like Sasaki's are important. We need to attract as many people as possible to cities, because urban life is central to a more sustainable future. In cities, per-capita carbon emissions and energy and water use are much lower.

But beyond the metrics, cities can just be great places to live in -- if they are designed to be livable and beautiful, filled with outdoor spaces, historic buildings, and efficient transportation systems.

The cities in the survey must be doing some of these things right: Some 60 percent of respondents said they will still be in their city five years from now. Now, we just need to increase those numbers for all cities.