A new breed of theist is emerging around the globe. We are religious naturalists: Reality is our God, evidence is our Scripture, integrity is our religion, and contributing toward a healthy future is our mission.

Since April 2002, my science-writer wife Connie Barlow and I have traveled North America and have addressed more than 1,600 secular and religious groups. Our goal is to communicate the inspiring and empowering side of science to as many people as possible.

Whether addressing evangelicals, atheists, UUs or gurus, our message is always the same: We show how a deeply meaningful and fully evidence-based view of big history, human nature and death can inspire people of all backgrounds and beliefs to live in integrity and cooperate in service of a just and thriving future for all.

Over the course of the last decade, in addition to talking with folks after our programs, Connie and I have lived with hundreds of people in their homes. We've thus been privileged to have intellectually rich and heartful conversations with countless kindred spirits -- those, like us, whose passion lies at the intersection of science, inspiration and sustainability.

This is an evolving document. Your feedback is welcome. Please post your questions, comments, criticisms and especially your suggestions for improvement in the comments section below, or email me at Michael@ThankGodforEvolution.com.

A Manifesto for the New Theism

A new breed of theist is emerging in nearly every denomination and religion across the globe, and many of us are grateful to the New Atheists for calling us out of the closet. Just as today's crop of bestselling unbelievers are echoing what was said a hundred years ago, New Theists are re-articulating themes that ignited liberal sensibilities of the 19th and 20th centuries.

New Theists are not believers; we're evidentialists. We value scientific, historic and cross-cultural evidence over ancient texts, religious dogma or ecclesiastical authority. We also value how an evidential worldview enriches and deepens our communion with God-Reality-Life-Universe-Mystery-Wholeness.

New Theists are not supernaturalists; we're naturalists. We are inspired and motivated far more by this world and this life than by promises of a future otherworld or afterlife. This does not, however, mean that we diss uplifting or transcendent experiences, or disvalue mystery. We don't. But neither do we see the mystical as divorced from the natural.

New Theists differ from traditional theists in the same way that secular Jews differ from fundamentalist Jews. Most of us do value traditional religious language and rituals, and we certainly value community. We simply no longer interpret literally any of the otherworldly or supernatural-sounding language in our scriptures, creeds and doctrines. Indeed, we interpret all mythic "night language" as one would interpret a dream: metaphorically, symbolically. 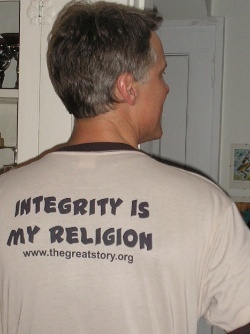 New Theists practice what might be called a "practical spirituality." Spirituality for us means the mindset, heart-space and tools that assist one in growing in integrity (i.e., in right relationship to reality) and supporting others and our species in doing the same. It also means an interpretive stance that can be counted on to deliver hope in times of confusion, solace in times of sorrow and support for handling life's inevitable challenges.

New Theists are legion; we are diverse. Many of us continue to call ourselves Christian, Jew, Muslim, Hindu or Unitarian. We may also self-identify as emergentist, evidentialist, freethinker, neo-humanist, pantheist, panentheist or some other label.

New Theists don't believe in God. We know that throughout human history the word "God" has always and everywhere been a meaning-filled interpretation, a mythic and inspiring personification of forces and realities incomprehensible in pre-scientific times.

New Theists view religion and religious language through an empirical, evidential, evolutionary lens, rather than through a theological or philosophical one. Indeed, an ability to distinguish subjective and objective reality -- practical truth (that which reliably produces personal wholeness and social coherence) from factual truth (that which is measurably real) -- is one of the defining characteristics of New Theists.

New Theists are religious naturalists. Crucially, we value religion and religious heritage not only as a personal preference but also for its historic role in fostering cooperation at scales far larger than our instincts alone could have achieved (also here and here).

New Theists do not have a creed (we're not that organized). But if we did, it might simply be this...

Reality is our God, evidence is our scripture, integrity is our religion, and contributing toward a healthy future is our mission.

By "reality is our God" we mean that honoring and working with what is real, as evidentially and collectively discerned, and then creatively imagining what could be, is our ultimate concern and commitment.

By "evidence is our Scripture" we mean that scientific, historic and cross-cultural evidence provide a better understanding and a more authoritative map of how things are and which things matter (or what is real and what is important) than do ancient mythic writings or handed-down wisdom.

By "integrity is our religion" we mean that living in right relationship to reality and helping others and our species do the same is our great responsibility and joy.

By "contributing toward a healthy future is our mission" we mean that working with people of all backgrounds and beliefs in service of a vibrant future for planet Earth and all its gloriously diverse species is our divine calling and privilege.

Why call ourselves "theists" at all if we're not supernatural, otherworldly believers?

All theological "isms" (e.g., theism, deism, pantheism, atheism) came into being long before we had an evolutionary understanding of emergence. Accordingly, all such concepts are outdated and unnecessarily divisive if they are not redefined and reinterpreted in an evolutionary context. Other terms that have been offered, in addition to "New Theist," include "evolutionary theist," "naturalistic theist," "religious humanist," "post-theist," "mytheist" and "creatheist" (pronounced variously, and humorously, as "crea-theist" or "cree-atheist").

Whatever our differences, New Theists are evidentialists who honor the evolutionary significance of religion, value traditional inspirational language, and are committed to living upstanding moral lives in service of a thriving future for humanity and the larger body of life.

We view this as Religion 2.0