Tony Goldberg had been back from Uganda for only about a day when he felt a distressingly familiar itch in his nose. A veterinary epidemiologist at the University of Wisconsin, Madison, he had just spent a few weeks in Kibale National Park studying chimpanzees and how the diseases they carry might make the jump to humans. Now, he realized, he might have brought one of their parasites home with him.

There was only one way to be sure. Goldberg quickly gathered the necessary supplies—a pair of forceps, a flashlight, and a mirror—and steeled his resolve. Using the mirror to steer his hand, he poked the instrument into his irritated nostril, latched onto a suspicious lump, and quickly yanked it out, careful not to snag any nose hairs in the process. There it was: an adolescent tick. At that point, Goldberg knew, it had likely been living in his nostril for several days.

This was not Goldberg’s first nostril tick, and it’s unlikely to be his last. (On the whole, he says, the experience is “not pleasant but not as bad as you might think.”) He’s seen lots of chimpanzees with nostril ticks during his time in the field, so he’s not surprised a few of the parasites have taken advantage of his presence to burrow into the nose of a closely related primate. 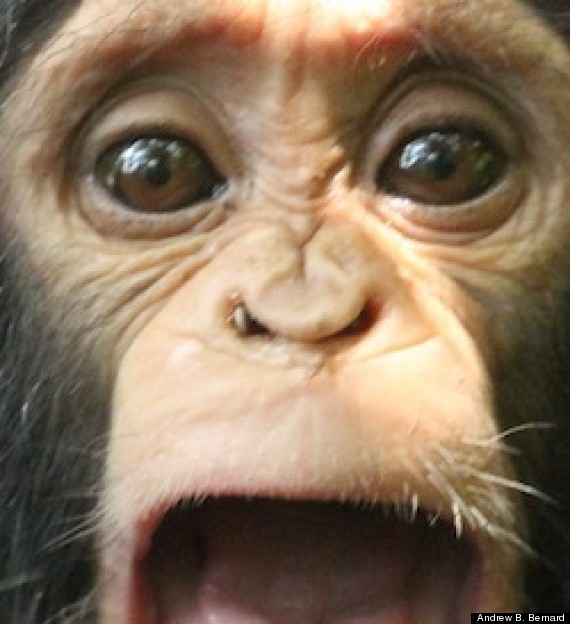 Goldberg says the ticks may have developed a knack for attaching to chimps’ nostrils to better avoid being “groomed off."

This particular tick, however, presented a unique opportunity. Because he found it when he was already back in his lab, Goldberg says, “I was in a position to preserve it for DNA analysis. It was just lucky that the timing was right.”

The nostril tick belonged to the genus Amblyomma, species of which are known to carry diseases that can infect mammals ranging from cows to people. But for now, that’s all Goldberg knows. “Its genetic sequence didn’t match anything in any known databases. So it could be a known species of tick that hasn’t been genetically characterized yet, or a completely new species,” he says. Goldberg reports his analysis in the latest issue of The American Journal of Tropical Medicine and Hygiene.

“It’s fun to welcome Tony to that small, elite club of publishers on ticks in the nose,” says Gary Aronsen, an anthropologist at Yale University who is one of the few other scientists to have written about a close encounter with a nostril tick. (He sneezed his out during a layover in Amsterdam and brought it home with him in a chewing gum wrapper, though he wasn’t able to sequence its DNA.) Picking up parasites like these is “part of the glory and glamour of fieldwork.”

Although researchers know very little about nostril ticks, including which other species they infest and if they carry any diseases, Goldberg speculates that his might be adapted to live in noses of chimpanzees. Chimps are fastidious groomers, so any parasite that wants to hang around for a while needs to fly under the radar. “I can’t think of a better way to do that than hide in an anatomic site that is difficult to access with the fingers,” Goldberg says. “There are several of those—some of which we won’t discuss—but the nostril certainly counts.” (In case you’re wondering, yes, chimps do pick their noses, but it doesn’t seem to dislodge the ticks.)

Because most ticks need to feed on at least three different hosts in their lifetimes, they are exceptionally good at transmitting disease. Species-jumping nostril ticks are “yet another example of how nature provides opportunities for pathogen spillover,” says tick biologist Thomas Mather of the University of Rhode Island, Kingston. Still, the thought of nostril ticks spreading throughout North America isn’t keeping him up at night. “I’m not looking at this as a likely pathway for the introduction of exotic ticks. How many ticks are going to be in a person or two’s nose?”

Nearly a year and a half after removing his own nostril tick, Goldberg hasn’t suffered any ill effects. But the parasite remains a mysterious creature, and for now, the only thing to do is wait for more specimens to turn up. He hopes his paper will raise awareness among his fellow field scientists. Soon, he suspects, “somebody somewhere will come up with another nose tick and will advance the field to the next level.”