A new narrow-snouted species of tyrannosaur discovered in Utah reveals that the isolation of an ancient island continent may have spurred incredible dinosaur diversity some 80 million years ago.

Lythronax argestes was discovered in 2009 in Grand Staircase Escalante National Monument in Utah. Paleontologists Mark Loewen and Randall Irmis, of the Natural History Museum of Utah, in Salt Lake City, were eating lunch together when they got the call about the discovery.

"Immediately, we were super-excited, because no fossils had been found in rocks quite that age, the 80-million-year-old rocks, so we knew there was a good chance it could be something new," Irmis told LiveScience.

Indeed, the fossil — about half of a skull and a half-dozen or so of bones from the body — is of a previously unknown species of tyrannosaurid, a group that includes the famous Tyrannosaurus rex. 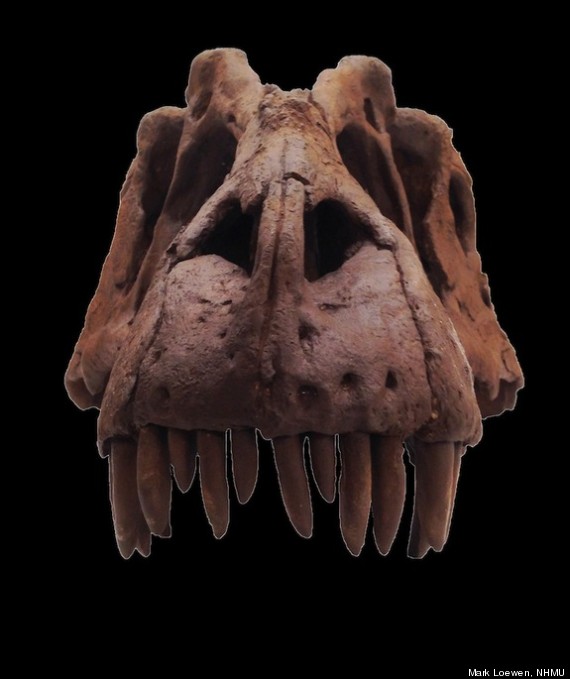 The skull of a newly discovered species of tyrannosaur, Lythronax argestes.

Now, researchers have prepared and identified the fossil, reporting the find today (Nov. 6) in the journal PLOS ONE. [See Images of the Life of a T. Rex]

Lythronax translates to "king of gore," a name given in honor of its meat-eating nature. The dinosaur lived during the Late Cretaceous Period. The dinosaur would have measured 24 feet (8 meters) long and weighed about 2.5 metric tons (2.75 short tons).

Its home was Laramidia, an island continent created by a vast interior seaway that split North America in two between about 95 million and 70 million years ago. Lythronax is the oldest tyrannosaurid ever found, Irmis said. What's "really weird," he added, is that it's closely related to the famous T. rex, which is the youngest tyrannosaurid ever found at about 69 million years old.

That close relationship means most of the branches of the tyrannosaurid family must have split before 80 million years ago, earlier than once thought, Irmis said. And what that means is a bevy of dinosaur missing links.

"There's a whole slew of new tyrannosaurids waiting to be found out there," Irmis said.

Lythronax had a short, narrow snout and a wide skull back, with eyes oriented toward the front. This anatomy would have given the dinosaur overlapping vision, allowing it to perceive depth. T. rex had a similar anatomy, study researcher Loewen said in a statement. 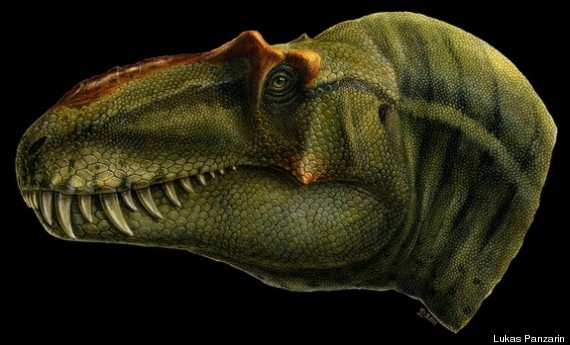 An artist's depiction of new tyrannosaur Lythronax argestes, which had a relatively narrow snout and a wide skull around the eyes.

The new tyrannosaurid is most closely related to other tyrannosaurid specimens found in southern Laramidia (today Utah, Texas, New Mexico and Mexico) than to ones found in the northern part of the ancient continent (today Montana, Wyoming, North and South Dakota and Canada), the researchers reported. The reason seems to be that Lythronax and its relatives began their evolutionary split when the Western Interior Sea was at its widest.

"We think that when the sea levels were high, [the waters] actually moved inland and isolated different areas of land and allowed the dinosaurs living in those diff areas to evolve separately, and that's why we have so many different species," Irmis said.

The new Lythronax fossil goes on display today at the Natural History Museum of Utah.

Paleontologists believe the dinosaur lived up to 95 million years ago in the late Cretaceous Period on a landmass in the flooded central region of North America. The fossils were found in the Grand Staircase-Escalante National Monument.

They've named the dinosaur, Lythronax argestes (LY'-throh-nax ar-GES'-tees). The first part of the name means "king of gore," and the second part is derived from the poet Homer's southwest wind.

University of Maryland paleontologist Thomas Holtz, Jr. says this new dinosaur is the equivalent of a great uncle of the Tyrannosaurus rex.