This is an except from the recently released Verizon New York 2015 Financial Annual Report, which was filed with the NY Public Service Commission (NYPSC) on June 30th, 2016. 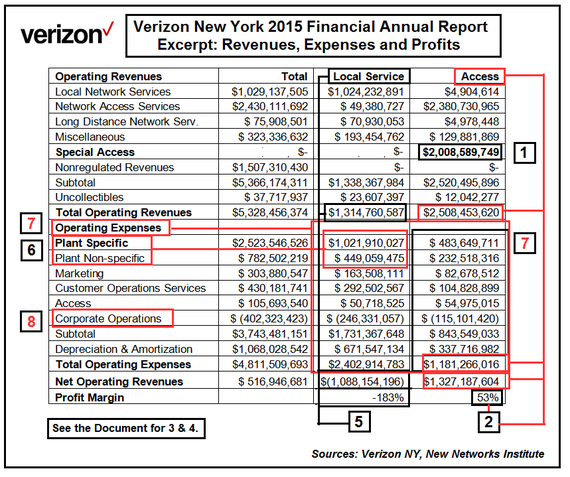 There are currently a number of proceedings at the FCC related to 'special access' services, recently renamed "Broadband Data Services". These are becoming increasingly important as most wireless cell sites or WiFi hot spots are attached to these wires, and even the new "5G" and "DAS" services are based on special access wires. They are also used for ATM machines and alarm and security services; and they are the wires competitors use to offer wireline or wireless competition. And, a fact that has been missing--much of these wires also happen to be part of the wireline utility networks and are the exact same wires used for phone service, which are controlled by the 'incumbent utility phone companies', including Verizon New York.

The FCC has asked how it should set the parameters for the pricing of special access to end users and competitors. Yet, the FCC has not done any actual audits of the revenues and expenses, much less the profits. In fact, the FCC plans on using mathematical formulas to fudge the answer. There is even a proposal on the table by Verizon and INCOMPAS, (the association of the competitors), settling some of their long held differences--and it, too, proposes the use of these "X-Factor", productivity formulas, alongside some principles to 'move forward'.

Alongside this, there is also the "IP Transition", which has been more of a plan to shut off the copper wires and force-march customers onto wireless, for example. Verizon and AT&T claim that the local phone networks are losing money and access lines, and the company should be able to 'shut off the networks' whenever and wherever they want. But there are problems with this. a) These lines are still in use and b) they are also used by the competitors, who are not permitted to migrate services to fiber optic upgraded networks currently, and c) there has been no 'clamoring' for these services by consumers in AT&T's IP Transition trials.

Now, with this new Verizon NY 2015 Annual Report data we have a clearer picture of just how broken special access is and how it has harmed the American public and the economy.

However, Verizon NY (VNY) is not unique, either as compared to other Verizon state utilities or compared to AT&T or CenturyLink's state-based utilities. The main difference is that VNY is required to file a full annual report; no state we know of has a similar obligation and the FCC stopped collecting this data in 2007.

NOTE: There is a detailed report and filing planned about this new data and it will be tied to 'reply comments' at the FCC.

Let's Do Some Highlights by the Numbers.

The opening excerpt has numbers attached and it details the revenues, expenses and profits of Verizon New York, encapsulated as a summary, for the year 2015. (NOTE: We moved the 'special access line item' from a different page and left out the 'nonregulated' category; thus the totals are for three categories.)

Special Access is part of "Access" services, which are payments for using the networks or access lines, such as special access. And to be clear special access lines are not special but can be the exact same mostly copper (or fiber) wires used for phone service and are part of the state utility--Verizon New York. Also, Special Access accounted for over 80% of the revenue.

If you simply take the revenues minus expenses you find that Access services had a 53% profit margin.

3)There Are a Number of Financial 'Buckets' of Revenues for Special Access.

In May 2014, NNI wrote "It's All Interconnected" with David Bergmann, Esq. and it was published by Public Utility Law Project, (PULP). We found that special access, mostly copper-based TDM services were a $23.4 billion dollar market in 2013, which represented about 60% of special access revenues. However, we found that there was another financial bucket of money, revenues not included on these books, that would bring the total to $45 billion for the year 2013.

17 months later, the FCC confirmed our findings providing virtually identical market sizing, but the FCC's analysis is based on the FCC's own data collection.

Thus, this $2 billion revenue is part of the TDM copper-based-special access market.

Updating the info, we estimate that the national TDM side grew to $29 billion, and using the FCC's breakout, this would make the entire BDS market about $48 billion. We believe that this is a very low accounting for multiple reasons. And we note that the telcos have been telling everyone there has been a serious decline in this area. It's not true at least for Verizon New York.

The other revenue, expense and profit column on this Verizon NY excerpt is for Local Service. It brought in $1.3 billion in revenue, but shows losses of over $1 billion. This category has traditionally been POTS, Plain Old Telephone Service, and add-on features. How did it lose all this money?

Verizon NY's Local Service was charged $1.47 billion for the "Plant" and "Plant Non-Specific" expenses, which are part of the capital expenditures' budget for network upgrades and maintenance. As we just mentioned, Local Service only brought in $1.3 billion in revenues.

The manipulation of the accounting, dumping the majority of expenses into the state utility to make it look unprofitable, and the cross-subsidies of Verizon's other lines of business, can best be seen by the construction and maintenance ('plant' and 'non-specific') expenses that are in the Local Service category.

If you stare at the expenses for Access and Local Service, one is struck by the fact that the Access expenses are a fraction of what Local Service is paying for all expenses. For example, Access had $2.5 billion in revenue but paid $716 million in network costs ('plant' and 'non-specific'). In this case, Access is paying about 29% as compared to revenue.

As we have just seen, Local Service is paying a whopping $1.47 billion for network costs which comes to 112% as compared to Local Service revenues.

But here's the kicker--Local Service is mainly the copper-based local phone service and ancillary services. Verizon announced it was no longer upgrading the copper or even maintaining it - and the unions have filed actions in various states, documenting the harms of letting the networks deteriorate.

So, what lines of business are benefiting from local phone customers, including low income families, paying extra via rate increases?

"Corporate Operations" expense is a garbage pail of corporate expenses, from lawyers and lobbying to even the executive jet. Going through the annual report we found that $2.6 billion was charged to Verizon New York for Corporate Operations in 2015. Local Service paid about 60% while Access services paid about 30%. But as you can see on the excerpt, this line item, 'number 8' doesn't include these losses.

If we include these payments, the total "net revenues", matches previous years; Local Service would have lost $2.67 billion. Including this info, Verizon NY, overall, would have lost $2.1 billion, while Access would still have shown a $560 million profit.

Special Access: About $20 Billion in Customer Overcharging Annually. In separate investigations using different sources of information, Consumer Federation of America's 'macro' analysis, published in April 2016, shows that special access is being overcharged about $20 billion annually; this matched our 'micro' analysis. Using this new 2015 information, we estimate that nationwide, about $21 billion has been overcharged in 2015.

The FCC has been collecting data about special access services for the last few years and there are a number of open proceedings.

This 2015 Verizon NY financial report shows the starting point--Special Access has very high profit margins because it can cross-subsidize this line of business and pay a fraction of the actual expenses incurred.

We believe that the companies realized that supplying actual cost data would expose these massive subsidies.

B) Mathematical Mumbo Jumbo: The FCC is planning on using mathematical formulas to determine the price of special access --Look out for these terms:

THERE IS NO MATHEMATICAL MODEL THAT ACCOUNTS FOR CROSS-SUBSIDIES OR UNDERPAYMENTS.

THE SPECIAL ACCESS BUSINESS IS PAYING A FRACTION OF THE EXPENSES THAT ARE USED IN THE MODELS.

In short, all of the models are garbage and will immortalize the subsidies and cover them over if they are used.

C) 'Zero' Access Lines Quoted: Verizon and AT&T are losing lines, right? Well, no. Here's the problem; we just read that Special Access services are based on the same state utility networks and that they are the same wires used by phone service. But, there is no accounting of the increases in 'access lines' by the FCC or states--because neither the FCC nor the telco add the special access lines as part of the data they supply.

In fact, we filed a letter for the FCC to investigate special access line accounting because - if the revenues are going up, then the access lines are going up--which would mean that the wireline networks are not only profitable but are growing.

D) Add "DAS" and 5G: And the networks will keep growing as the current wireless plans, known as "DAS", Distributed Antenna System, uses lots of small cell antennas that are attached to a fiber optic wire--a special access fiber optic wire. And 5G is a 'fiber-to-the-antenna' service.

The FCC Failed to Recognize that Special Access Is Part of the State Utility.

The FCC is a federal agency in charge of 'interstate' services--and it is attempting to examine and set prices for these interstate services. But the revenues, expenses and profits of special access are on these state-based financial books because the wires are part of the state utility, Verizon New York, which has a franchise with the state and cities that gives them the rights of way. And, because of the cross-subsidies, the 'state-based' (intra-state) phone customers are getting expenses dumped into their front yard, as it were.

Moreover, the FCC has not audited the books for the massive cross-subsidies-- even though the FCC's cost allocation rules caused much of this mess. In 2001, the FCC 'froze' the allocation of expenses, such as marketing or corporate operations, to mimic the year 2000, when Local Service was 60% of revenues. 15 years later and the FCC still has not examined its own error, which caused a disproportionate amount of expenses to be paid by Local Service and a fraction of expenses paid by the other lines of business.

This 2015 Verizon Financial Report shows that the special access services, which travel over the copper (and fiber) public utility wires, are very profitable and growing. And they are profitable because they can pay a fraction of network expenses, while having Local Service customers pay most of the expenses.

CODA: Both AT&T and Verizon filed twice, each, to block our access to see the FCC's collected special access data. And the FCC agreed with the incumbent phone utilities and we never got to examine their information. We decided to not appeal--so we can't be accused of violating any confidentiality agreement and have them block this analysis from being disseminated.