Warsaw -- In a ceremony marked by fanfare, pageantry and a measure of solemnity, on October 28, the Polin Museum of the History of Polish Jews officially opened its doors to the public.

Located in what was once the heart of this city's lively Jewish quarters, reduced to rubble during WWII, the gleaming glass building, an award winning design by Finnish architects Ilmari Lahdelma and Rainer Mahlamaki, sits on a tremendously symbolic site, on a plaza facing a monument to the heroes of the Warsaw Ghetto.

Nearly twenty years in the making, the museum is being hailed as an unexpected and bold endeavor. The cost of the museum was $100 million, funded by a public private partnership. In the past year, some 500,000 people -- Poles and tourists -- visited the museum for temporary exhibits, a measure of the public's interest and enthusiasm. Its most enduring impact may well be its educational mission, reaching out to families, school children and young adults, to shine light on a complex history long overshadowed by World War II and Communist rule.

The president of the Republic of Poland, Bronislaw Komorowski and the newly elected president of Israel, Reuven Rivlin, presided over the outdoor ceremony attended by Polish dignitaries and representatives from governments and the arts around the world.

"Only a few decades ago, the opening of a museum devoted to the past, present and future of Jewish history in Poland would have been impossible," reflected Tad Taube, chairman of Taube Philanthropies, a major source of funding for the museum.

Taube, whose family fled Poland in 1939 when he was a child, has been a prime backer of this museum for the last decade and a champion of encouraging a renewal of active Jewish life here.

Nearly two-third's of the world's 15 million Jews trace their ancestors to Poland, but for many Jews, the prevailing image of Poland is the Holocaust, when three million Polish Jews perished during the Nazi occupation. Several hundred thousand remained after the war. Today, some estimate there are between 15,000 and 20,000 Jews in Poland, with an unknown number with Jewish family roots. The last twenty-five years have witnessed an unexpected resurgence of active Jewish life in Poland, with religious, social and cultural organizations and programs.

With the opening of the new museum's permanent exhibit that traces the 1,000 year history of Jews in Polish lands, its creators and supporters have high ambitions that the museum will broaden the perspective beyond the Holocaust and anti-Semitism and encourage open discussion about Jewish-Polish relations in the country's past, present and future.

"Our goal is to create an understanding of the conflicts of the past and the way in which which Poles and Jews interacted with each other," said Antony Polonsky, a professor at Brandeis University in Massachusetts and a leading scholar on Polish-Jewish history who is the museum's recently appointed chief historian. 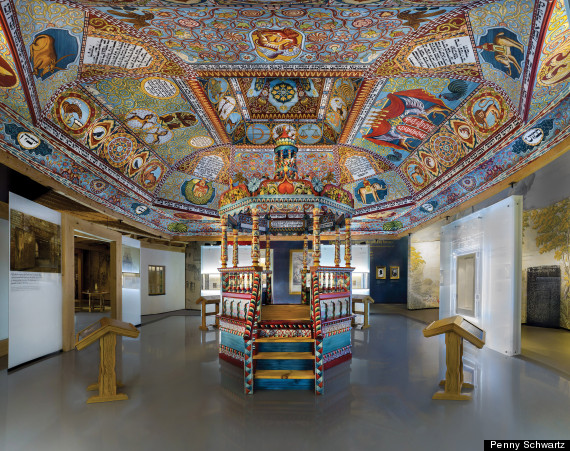 The permanent exhibit, on the museum's lower level, developed by Barbara Kirshenblatt-Gimblett, a scholar and museum professional steeped in Polish-Jewish culture, presents a complex portrait of how Jews lived for centuries in Poland, dating back to the Middle Ages, rather than focusing solely on how they died. The museum does not shy away from the Holocaust, presented in one darkened gallery. The final gallery reflects a resurgence of Jewish life in Poland over the last quarter century.

The most striking display of the permanent exhibit is a luminous reconstruction of the painted ceiling and timber framed roof of the 18th century Gwozdziec Synagogue in a gallery titled, "The Jewish Town." Kirshenblatt-Gimblett described its vivid, colorful imagery as a "heavenly canopy."

The replica was created through a partnership between the museum, the Association of the Jewish Historical Institute of Poland and Handshouse Studio, an educational organization in Boston, founded by Rick and Laura Brown, artists and inspired educators at the Massachusetts College of Art.

It is the subject of a new film, "Raise the Roof," made by Yari and Cary Wolinsky, and co-produced with John Rubin Productions. The lively film, screened during the opening days of the museum, gives voice to many of the students and the skilled carpenters from the International Timber Framers Guild and artists who built and painted the replica, using traditional tools and materials. In the film, Marcin Kaminsky, a Polish architectural student who helped build the roof, expressed tremendous pride in being part of the huge undertaking that now hangs in the museum.

The years-long endeavor to create the synagogue replication -- all done by hand using traditional tools and materials and completed in workshops across Poland -- speaks to the museum's foremost commitment as an educational and community-focused institution.

Jason Loik and Emma Payne are two of the hundreds of young adults and students from the U.S., Poland, Israel and other countries who participated in building and painting the replica. Both were in Warsaw for the museum's opening. 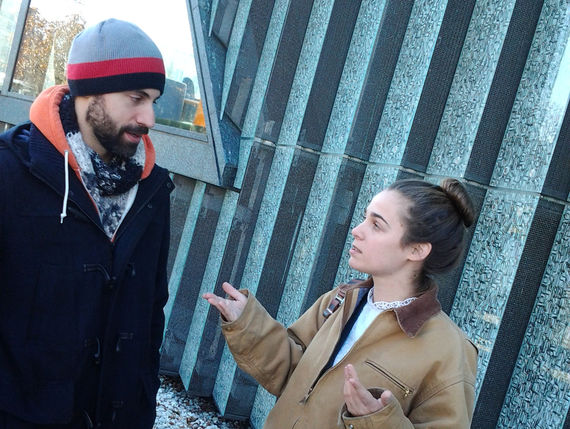 Loik, a 33-year old Rhode Island sculptor and designer for some of the world's largest game companies, got involved in the project when he was a 21-year-old art student, even though he has no Jewish heritage and had little knowledge of architecture or Polish history.

"I find the history fascinating," he said, standing in front of the museum the day before it opened.
Over the years, Loik found himself feeling more connected to the artists of the time, he said, having imaginary conversations with the Jewish artists who painted the original eighteenth century ceiling, he revealed. 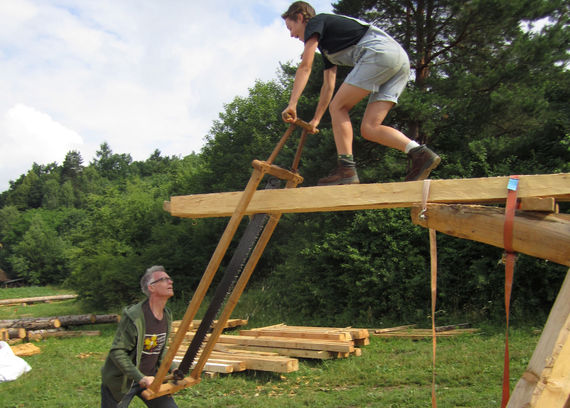 Payne, is a 23-year-old Jewish student at the Massachusetts College of Art and Design in Boston, who spent a summer transforming 200 logs into timber frames to construct the synagogue replica's roof. She even lured her father, Thomas Payne, a furniture maker in Boston, to join the crew for a week. Both were at the museum's opening ceremonies, along with Emma's sister and mother, whose own parents fled Poland just before the war.

Sophia Rademaker, an American Jewish teen who helped paint the replica of the synagogue's hand carved bimah, the prayer podium, toured the core exhibit with her grandmother, Irene Pletka, a museum funder. She was especially attracted to the museum's emphasis on interactive exhibits. Her ancestors were Polish and she is drawn to learning more of the history, she said.

These are among the new generation museum officials and supporters hope to continue to attract.

The museum fills a vacuum left by the war, according to Marian Turski, an Auschwitz survivor whose family was killed in the war. Turski, who now serves as the chairman of the Council of the Jewish Historical Institute of Poland, lost other members of his family in the Holocaust.

"We are here!" Turski declared at the opening ceremony. "That is the message: We are here!"