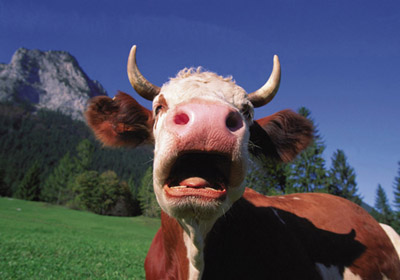 Our ever-evolving culture gave me a new verb, a new phrase, and a new acronym last week. The verb is "googlemire," and if you've ever been sucked into the Internet's virtual vortex, you know exactly what it means. Word maven Patricia T. O'Connor used it on NPR the other day, but, ironically, the word's so newly minted that you can't google it, yet.

The first time I got googlemired was December 19th, 2005. At the time, I was getting paid to blog about food for a "healthy living" website. With Christmas around the corner, I set out to write an innocuous post about low fat eggnog.

I googled around in search of the best brands, which led me to Horizon, which led me to the revelation that this supposedly organic dairy producer with the famously happy cows on its cartons was, in fact, becoming infamous for cramming its cows into open-air feedlots that totally violated the intentions of the organic standards. I got sucked into the Agribiz muck and have been stuck there ever since.

Which brings me to the sad new shorthand for battered bovines: "spent dairy cows." The Humane Society employed this phrase a month ago, in reference to the Westland meat recall, noting that "15 percent of the hamburger meat in the United States comes from "spent" dairy cows."

Last Thursday, the New York Times used the phrase minus the quotation marks, a sign that it's officially entered our lexicon:

An investigator for the Humane Society spent six weeks working in the outdoor pens at Westland/Hallmark, which used spent dairy cows to make ground beef.

Before you dismiss "Downergate" as last week's news, allow me to draw your attention to some details that beg for better coverage:

Downer cows are considered potentially unfit to eat because a cow that can't stand up may be (a) carrying mad cow disease, and (b) may have wallowed in E. coli-tainted manure which might find its way from the cow's hide to its carcass, and from there into our hamburgers.

But there are three standard factory farm practices that also cause dairy cows to stumble:

1. The high calorie, low fiber corn and soy-based feed they're fattened up on--instead of the grass their bodies are designed to digest--disrupts the balance of bacteria in their digestive tracts, causing a condition called acidosis. Severe acidosis leads to ulcerations, which in turn causes an excruciatingly painful inflammation of the hooves called laminitis.

2. Injecting cows with rBST (aka bovine growth hormone) in order to increase their milk production creates a much higher risk of an udder infection called mastitis, which also leads to laminitis (along with pus-filled milk, ick.)

3. Astonishing as it may seem, cows are not biologically equipped to stand around on concrete floors all day; depriving them of the softer sod their hooves are meant to stand on and giving them little or no opportunity to lie down are two more open invitations to laminitis.

A dairy cow raised on pasture and spared growth hormones can produce milk for a decade or more and remain healthy, whereas illness is the norm for the average CAFO cow subjected to regular rBST injections; antibiotics are routine and these crippled creatures are used up, or "spent," within a few years, at which point they're sent off to slaughter and turned into hamburger, some of which ends up in our kids' school lunches.

Which brings me to a Madison Avenue-manufactured acronym coined by "youth market analysts," as the New York Times reported last week: KGOY, or Kids Growing Older Younger. The article was about 7 year-old girls getting pedicures and playing with make-up, but it's part of a larger and -- to me, anyway -- insidious trend of girls reaching puberty at an ever earlier age.

Our hyper-sexualized, uber-consumer culture may be partly to blame (makeovers for 6 year-olds? How warped is that?) but scientists are also eyeing a whole host of environmental factors including the hormones that contaminate our food chain. No definitive link's been proven, but, much to the consternation of the corporations who peddle these products, wary parents are avoiding antibiotic and hormone-tainted dairy products, meats, and other foods for their kids' sake and their own health, too, as more and more folks begin to wonder what all these adulterated foods may be doing to us.

Sadly, your desire to know whether the milk you buy came from an rBST-injected cow or how the meat you eat was raised conflicts with Agribiz and Big Food's desire to turn a profit. So they're pulling out all the stops to prevent you from having access to that information, with the help of "our" government.

On the rBST front, Monsanto's launching a multi-state, Astroturf-assisted assault on the labels that currently enable consumers to select rBST-free dairy products. Read the gory details in a hilarious (if horrifying) "open letter to Monsanto" posted on the Ethicurean by Ali of The Cleaner Plate Club fame.

The USDA's Agricultural Marketing Service, meanwhile, is proposing a new label for meats that's lamer than a dairy cow pumped full of rBST. The USDA's new standard would permit a "Naturally Raised" label on livestock raised "without growth promotants, antibiotics, or mammalian or avian byproducts in their feed," as another Ethicurean, Elanor, noted the other day.

Sounds great, right? However, as Jillian points out over on Daily Kos:

Consumer polls indicate the average person imagines meat labeled "Naturally Raised" comes from animals that spent their drug-free lives freely roaming the fields of a family farmer, eating wild flora and being humanely slaughtered. A 2007 Consumer Reports survey shows 83% of consumers assume such labeling means "it came from an animal raised in a natural environment."

The USDA's proposed standard is, as Jillian astutely observes, "so weak it would apply to a cloned animal raised in the confines of a factory farm." And that's the idea, of course; it would dupe would-be ethical eaters into buying meat from feedlots, so Agribiz could profit from the demand for antibiotic and hormone-free meats. But what's natural about shoving animals into indoor stalls so small they can't budge and feeding them a diet that destroys their digestive tracts?

If you think that the label "Naturally Raised" should apply only to animals who have, you know, been naturally raised--i.e., allowed to graze in the great outdoors, treated humanely, etc.--you have until the end of TODAY, March 3rd, to submit your comments to the USDA. The Organic Consumers Association has an action form to make it easy for you to object to this Orwellian proposal (animal farm, indeed.) What are you waiting for? Make a mooove!!!