Yahoo released new versions of its Yahoo Mail product for smartphones and tablets - in keeping with Mayer's focus on mobile devices - and a revamped version of its Web-based mail product for PC users that cuts out ancillary features and that the company said delivers faster performance.

"You've told us loud and clear that you want fewer distractions when it comes to email. You want to quickly login, communicate, and get on with your day," Mayer said in a post on Yahoo's official blog on Tuesday.

Yahoo is the No. 1 Web email product in the United States and No. 3 worldwide, behind Google Inc's Gmail and Microsoft Corp's Hotmail, according to comScore.

But the number of unique users of Yahoo email declined 16 percent in November from a year earlier in the United States and 7 percent worldwide, according to comScore. Analysts say the decline owes partly to a younger generation of Internet users who prefer to communicate with text messages rather than email.

Mayer, a former Google executive who is widely admired in Silicon Valley for her Web product savvy, is moving to revitalize Yahoo's various Web products and reverse years of declining revenue.

She has said her top priority is to create a coherent mobile strategy for Yahoo and that she intends for at least half of the company's technical workforce to be working on mobile products.

As part of Tuesday's announcement, Yahoo unveiled an update to its mobile email app for smartphones based on the Android operating system, as well as Yahoo's first stand-alone app for Apple's iPhone.

Vivek Sharma, General Manager of Yahoo Mail & Messenger, said the group of new mobile apps was part of Yahoo's goal of ensuring that its products are available across all major mobile platforms -- a move that he said should help Yahoo's email stay popular with the younger generation of users.

"Most of the new users, especially young ones, are using mobile Internet devices. So the first order of things is to make sure there are native experiences for them," said Sharma referring to mobile apps that are specially designed for smartphones.

The years between Yang and Mayer were tumultuous ones at Yahoo, as the Web pioneer cycled through four different chief executives and a variety of strategies.

Yahoo ranks among the world's most popular websites, with roughly 700 million monthly visitors. But revenue has eroded due to competition from Google and Facebook and changes in the online advertising market that have compressed prices for the online display ads that are key to Yahoo's business.

Many analysts and tech-industry observers say Yahoo's online products have failed to keep up with rivals when it comes to integrating innovative mobile and social media features. 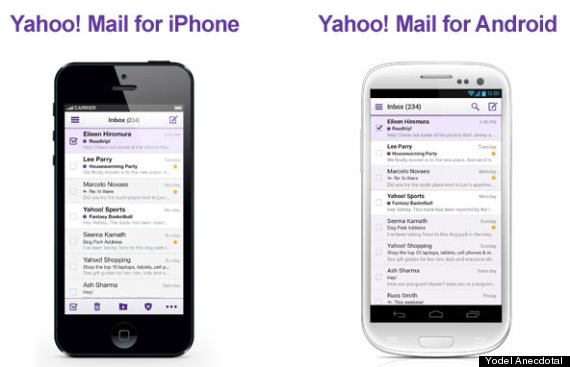