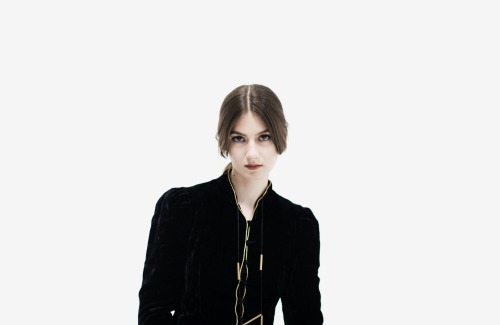 Sometimes you get the impression that music just isn't music anymore, but more of a conveyor belt of product being moved off the line, devoid of anything outside the current specifications. Then, you run into a piece of music that tries to break through those constructs and even the most open minded of music nerds have to shift how their ears listen to things to understand what the hell is going on. That's what I had to do in listening to the music of Natalie Mering, who records under the moniker Weyes Blood.

With her newest album The Innocents, Mering is making something closer to modern day chamber music tinged with an indie rock/folk feel it. It's eerie, yet beautiful, and its music coming from a vulnerable place. It's outside the box, but not weird; influenced by experimental music of many ages throughout musical history.

Mering will be in Detroit on Saturday, January 17, as Weyes Blood will be headlining a show at the UFO Factory. I was able to chat with Natalie Mering over the phone as she was on her way home to her place in Far Rockaway, Queens, New York about what inspires her as a musician and what her biggest fear is as an artist.

There's a luscious sonic backdrop to your music that mixes some of the old and some of the new in a very, dark emotive way. Where does that come from?
I do really like church music in terms of melody and choral arrangements but I just have a very deep voice so when I sing in my range it sounds dark to people that are used to having people sing in a normal vocal range. Also, the subject matter tends to be more on the emotional side, especially on this record. It's kind of a dramatic sorrowful record on some levels. It's mournful in that it's expressing emotions. It's romantic. That's how I like to view it.

What has music given you?
My favorite Hermann Hesse book Narcissus and Goldmund has this paragraph about how life is like this mystery where you are yearning for this unknown desire for meaningfulness or a desire for things to be connected or a desire for things to make sense. In my life, the moments that I feel like that veil are lifted are the moments where I felt like this is really making sense, everything is connected, or everything is meaningful, and we're all suppose to be for a reason. Generally these have been musical moments. That's how I experience the harmony of being alive. It's just a big huge mystery to me. It's very confusing. Music makes sense of life.

What is your biggest personal challenge outside of music?
I'm not good with money. I don't spend money, I just don't know how to make money. I've had a lot of compromised living situations, a lot of subletting, a lot of traveling, and a lot of staying at people's houses. I can't afford nice boots. It's been a challenge for sure (laughs). I used to be really good at being punk. There came a certain time, I think it was after I turned 21, which is funny because that's the legal drinking age, but I had already stop drinking by that time. I thought I had drank myself silly. I reach a point where the punk life wasn't really serving me and I was getting really lethargic and very tired and very sensitive to my environment. I couldn't handle cigarette smoke in warehouse.

Just out of sheer enjoyment, what music artists have you always loved to listen to?
I've always loved Sid Barrett and stuff related to Pink Floyd. The feel like Pink Floyd is like the moon band. The band that plays to the moon. Very spacey. Very mournful melodies. I love Harry Nilsson. He's one of my favorite vocalists of all time. I love Kraftwerk. They're one of the first bands to make electronic music that was influenced by the electronics themself as opposed to creating electronic music to sound like acoustic music. I like a lot of that early experimental electronic music a lot. I like some experimental composers; Olivier Messiaen's melodies are really beautiful and Radiohead was really influenced by those melodies also. I love early choral music before medieval music. There's also some basic stuff I love. I kind of love everything. I love Arthur Russell. He's incredibly inspiring. When I was a kid, I was obsessed with Ween, Sonic Youth, The Stooges, Lou Reed, all the classics. I love David Bowie.

Big picture, what are you trying to say in your music?
Ultimately, I'm trying to vanish the shame our culture associates itself with what's blatantly beautiful. That's one of the many things I'm trying to do, but on some level I think it's bad that the beauty of Enya, the beauty of choral music, or just the beauty of the female voice, that it's hard for people to take it seriously without associating it with like "oh that's old school" or "that sounds old" or "that's not of this time". I think you can combine really futuristic elements and really ancient elements and make it exactly about this time. That's my goal. Using things from the past and the future in a way that creates something new. That's probably what every band says.

What is your biggest fear as an artist?
Admittedly, getting the feeling that maybe I never suppose to do this and that I'm just taking up space. That I'm going to be in a bunch of used bins in five years. That's everybody's biggest fear, ya know. It's a real fear, but it's not grounded in reality. It's grounded in my own insecurities. I find the more that I keep putting out records, the more I keep doing, the more that fear is brought into question because there are people that experience my music and are grateful and are thankful that I made it. Even if there is just one person out there that's enjoying it, that's good. That's reason enough.

What are you trying to give to the crowd during your live show?
I'm trying to give the crowd genuinely lifted experience, an experience uncommon, not like a typical rock band. Just an uncommon experience. I really like to focus on stage and get into a trance with whatever I'm doing to make it as focused as possible. I don't want to go up there and be sarcastic or joke my way through a set. Generally, I keep it serious and emotional and raw and exposed. I feel like everybody can benefit from that experience. When you go see some bands, they're just really hip and detached, that's alright, but when you see somebody baring their soul, it's either incredibly annoying or incredibly enlightening. I'm willing to take that risk.