Each year hundreds upon hundreds of gay boys channel their inner Madonna and head to New York City and like the lore of the Material Girl's small beginnings goes, want to be taken to the center of everything. Richard Schieffer arrived in similar fashion, yet definitely took a road less traveled. From juggling multiple jobs to exploring some of the darker parts of New York City's famed nightlife, Schieffer has come out on the other side, and in the clear light of a sober life, he tries to not just inspire and be an example to others, but also to himself. From working with some of New York City's leading talent to keeping his passionate love for dance constantly thriving, Schieffer is a testament that, like the Material Girl, it's never too late for a Re-Invention. 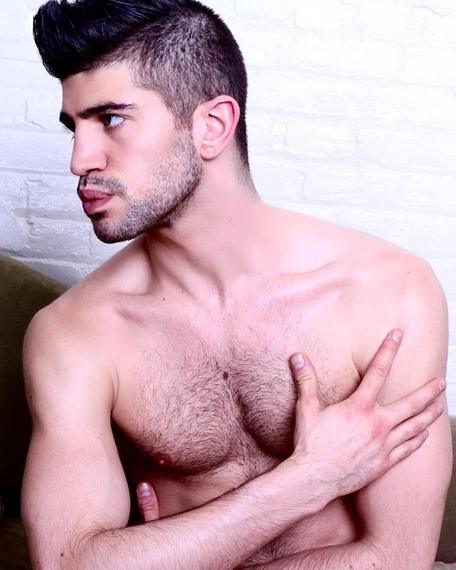 So Richard tell me-how you landed smack dab in the middle of New York City?
I grew up in a small town in upstate NY. I always knew there was a bigger world than the 8,000 people in my hometown. I saw the world through television, and by the time I was a teenager, I had gone to several dance competitions. I remember walking the streets of the Big Apple like I belonged - yes, that means I hated the tourist places, even then.

After I graduated high school, like most, I didn't know what I really wanted to do or who I wanted to be, so I moved to New Jersey for just under a year with my cousins. I learned a lot living there, especially how to escape to New York City which was a forty-five minute train ride away.

I desperately wanted to be here, living here, but moved home for a year. When I got tired of that isolated world, full of dreams, one July day I said to my mom, "I'm moving to New York City tomorrow." Of course, I packed up and it took a few extra days, but a friend opened his doors, and I jumped at the chance with an empty wallet; and by some miracle, I'm still here six and a half years later.

For so many young guys that come to New York City, it's so easy to get swept up in the scene and into some of the darker parts of it. What was your experience like?
Prior to moving here, I had seen many shows, including "Queer As Folk", that led me to believe that to be gay, I had to be in this nightlife thing that looked so glamorous through the lens of Showtime cameras.
The first time I came to New York City without chaperones, instead with a boyfriend six years older than myself, I was seventeen years-old. It was Memorial Day weekend of 2007, I was a senior at Norwich High School, and ended up on this place called "Fire Island". I met all of the right people and went to all of the right parties. It was then that I romanced this life in my head, that one that seems like so much fun.

My first week in New York City, I was already serving by day at California Pizza Kitchen and had booked several gogo slots at some of the hottest bars and clubs by night: one would say that there was no sweeping involved; rather, an industrial-sized vacuuming into nightlife.

Within a few years, I was constantly drunk, and when that stopped working and I wanted to fit in more, I started with drugs. Sex was always a part of my shenanigans, and with the drugs I was doing, I fit right in-until I didn't. The truth behind any progressive tale like mine is that you always end up alone, even if you're in a crowded room.

Booze and drugs, boys and sex all led me to a detox post suicide attempt, almost homeless, and all the meanwhile, I thought I was hot shit because I could out dance anyone if I had on a pair of heels. How many people see it as dehumanizing when we are in the grips of something we cannot comprehend? I had to discover that the way I was doing things was tearing away my dreams one-by-one. Imagine that flower that we pick the petals off of. Each petal removed with the words, "bad, not bad enough," or, "this hurts, this hurts so good."

When you were having some of your darker times, what kept you consistently moving onto the next day and not giving up?
Even today, I have to remind myself to slow down and take things one day at a time. That being said, I always found peace in my dancing. There was always a light that burned so hot of passion for my dancing, and it kept me chugging. It helped that others always saw something in me that I didn't see in myself. There was always a voice telling me that I was better than the life I was living, even if it was from someone across the room with a pipe in his mouth or needle in his arm... Or the opposite, my friends sitting me down and lovingly trying to intervene. It's truly a miracle, and hard to explain but I'd call it a "White Light Experience." I had to find my strength and stop pretending I was God.

Being sober in any nightclub driven scene is a challenge. What do you personally find to be the hardest part of staying clean when working and being around
Boys throw around their genitals and put their butts in the air so eagerly, and it's so tempting to jump into their party and play along, but I just remind myself where I was two years ago and being awake eight days at a time. It's not a pretty sight. I'll take my beauty rest any day. Getting and being sober is the best decision I have ever made. Today I can help others and I wouldn't give that gift up for the world.

What inspires you on a daily basis? Any specific mantras, songs or authors that get your through the harder times?
It sounds cheesy, but I start every day off with meditation. It sets intention to my day, puts order in my life.

As far as mantras go, "move a muscle, change a thought," plays a major role in my life.

Songs? Hmm, music just makes me want to dance, and that always brightens my day.

What's it like working in such hilarious videos with drag superstars like Maci Sumcox and Miss Fame and the legendary Sherry Vine?
Gurl, it's cray. I could be the biggest star in the world and still come do these videos for my gals. Sherry is someone that reminds me that it's okay to laugh and celebrate. And if you can't laugh at yourself, who can take you seriously? I'll tell you, being a goofball is the sexiest thing I could imagine. Who cares if others can't laugh along? Just loosen up. Ask Sherry how to get loose...That's not just from her age.

I just started working with Maci recently. She's creative, talented and a nut- or maybe that was one of the boys just peeking out the sides of their revealing undies in her videos.

As for Miss Fame, what can I say? She's brilliant and funny. She's not a parody queen, but we got to be dummies together and who else better to spend my time with than someone that is almost as pretty as me. 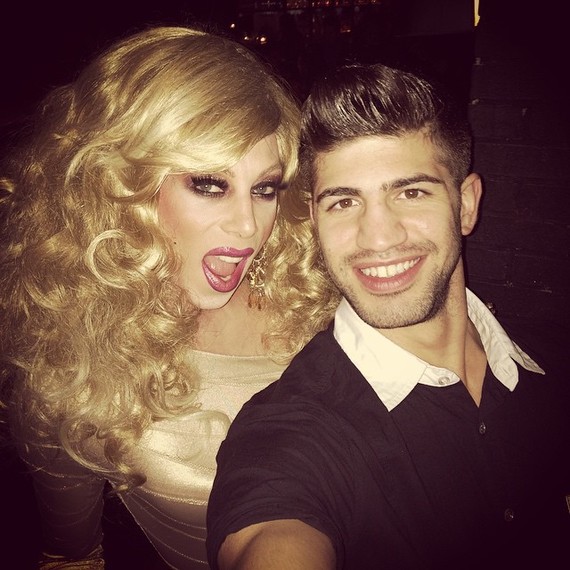 You're also a dancer/choreographer. What kind of music do you like hitting the floor to? Any aspirations to head to the Great White Way maybe?
Music starts playing and I'll hit the floor... Scratch that, such a cop out. I really like 80's hits. Pop in some Starship and I go bonkers. When music is on, I cannot contain myself. It has caused many issues in school and work, and in the supermarket with my mom as a kid. I think I knocked a few things off the shelves a couple of times!

As far as Broadway, most don't realize that I'm vocally trained, but a bit rusty after all of these years. What dancer doesn't want to be on Broadway? If it's anything like the family of Broadway Bares, then I'm in! Maybe 2016 is my year to break down the walls that I built from fear of success and allow myself to thrive. Maybe I'll get Kinky Boots- I mean, I am basically a drag queen.

Your online presence is one featuring, shall we say, little to no clothes at some points. How do you keep yourself in such fantastic shape? Any tips for the New Year's Resolutions crowd out there?
Besides dance? I work at the premier fitness club of NYC. Yes, the one with cold eucalyptus towels. I train with trainers, I workout on my own, I take classes. Each day I remind myself that I will be better some days than others, and I don't beat myself up over missing a gym day. Even if I can sneak in a twenty minute session on my busiest days, and least I did something.

The best advice I can give is to stop comparing and despairing. It's counterproductive. The best person you can be is not someone else, it's a better you than you were yesterday. So you ate a pint of Ben & Jerry's? Throw it up! I'm kidding, pass it my way. Make your workouts about you and your dedication inspire others later on.

What dreams are left to conquer for Richard Schieffer?
Well, we covered that thing Broadway that they rave about. I really want to tour with a major artist. Eventually I'd like to be featured in Broadway Bares (naked for charity, hey gurl heyyyyy). I want to open a restaurant one day in honor of my grandparents' place they owned when I was growing up. Lastly, I really want to lose three pounds.

Give me one word that describes your life right now...
Blessed..