In Part 1 we discussed Verizon's plan to go all-wireless-only and suggested that the reader might be thinking:

Let me use a recent panel discussion as an example of why you may have been misled if you believe that the wires don't matter or that wireless alone is the future. 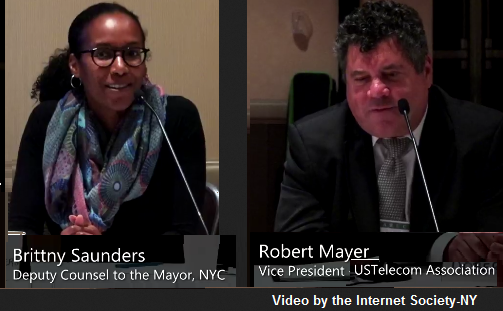 The Internet Society, New York chapter, has been active in documenting broadband and Internet related events for the last decade. ISOC-NY writes: "This clip is an excerpt from the Federal-State Broadband Conference, in New York City. In the video, USTelecom's Robert Mayer berates NYC for 'shaming' Verizon about their fiber deployments. Brittny Saunders of the Mayor's Office responds."

NOTE: By July 2014, 100% of New York City's citizens should have had the ability to get FiOS TV in their home under the cable franchise agreement. In June, 2015, the City of New York issued a scathing review and found major gaps in deployment. We found that the coverage of FiOS TV could be 60 percent or less.

Here are Some Other Data for N.Y.C. and Correcting the USTA Comments.

Let me address three quotes from the USTA representative, which comes back to the issue of the wires and wireless services.

NOTE: These comments reflect the views of the speaker and not necessarily the USTA.

First, these numbers are provided by Verizon and quoted by the USTA. Verizon is supplying the accounting of one class of service -- copper-based, phone lines that are used mostly for voice phone calling, commonly known as "POTS", Plain Old Telephone Service. (These lines are sometimes also called "TDM" or "switched access".) But, this accounting ignores the majority of access lines in service.

Verizon's goal has been to seriously exaggerate the size of the loss of lines as it makes their case that the networks are being abandoned and unprofitable and therefore should be shut off or they should be able to get more rate increases.

And while many believe that a 'landline' is just the copper-based service/wire, truth be told, since the 1990's, all wires, including fiber wires, are all 'landlines' or in the industry are called 'access lines'.

In 2009, we published a 25th anniversary report that analyzed the financials of the "Regional Bell Operating Companies" (RBOCs), which are now AT&T, Verizon and Centurylink. We also covered the manipulation of the accounting of access lines.

The USTA didn't bother to tell everyone about the massive increases in some types of access lines. This next exhibit is from the FCC's "Statistics of Common Carriers" report for the year 2007 (the last year the FCC published this data) and it shows something very odd. In New York State there were a total of 46.8 million lines in just New York State, in 2007. The access lines USTA quotes could fall under the 4.7 million "Main Access Lines" (or it could include some of the other 'switched access' categories), but it is only voice, "switched", copper-based phone lines, which only constitute a fraction of the actual lines in service in the year 2007. 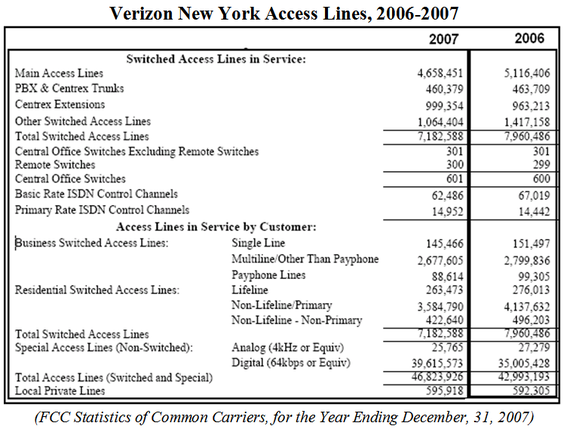 We also added information for the year 2006, which shows that while the "Main Access Lines" and other switched lines declined from 2006, the "Total Lines" increased in 2006 through 2007 from 43 million to 47 million access lines.

NOTE: Terms like "switched", "non-switched" or "special access" are very complicated to understand and there are multiple caveats, too technical to discuss here. But at the bottom of all of this is -- there are copper and fiber optic wires and the accounting is manipulated based on how the line is used -- but they are all 'access lines'.

One must ask: Where are the 40+ million other access lines in Verizon New York, as told by the FCC's data, (which was also provided by Verizon)? Also, this information is for the year 2007 -- eight years ago. What happened since then?

There is no current data provided by either the FCC or the states. For example, the new report by the NY State PSC "Staff Assessment of Telecommunications Services", leaves out an accounting of total lines in service, while, it's worth repeating, the FCC stopped publishing this information in 2007.

And notice that the lines missing are called "special access". While we hear about the 'line losses', in truth, based on the last FCC data, there was massive growth of the total lines -- especially the special access lines.

This is what happened from 1984-2006. The "Access Lines" are the traditional copper access lines of the companies currently known as AT&T, Verizon and CenturyLink, while the "Total & Special Access Lines" includes special access. (Note: There are caveats.) 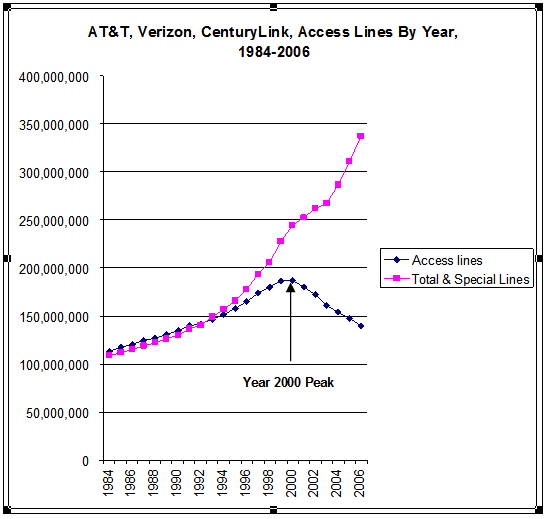 Reclassification and Omitting of the Majority of Lines

If you examine the previous chart, you will see there has been a major split in the lines classified as regular access lines vs special access, which was exasperated around 2000, the very year that the USTA starts its accounting of lines. (In fact, starting the accounting in the year 2000, the peak year of access lines in America, and the removal of specific categories of lines being counted as an access line, helped to distort the actual loss and gains of lines and was chosen on purpose.)

This massive shift took the existing, exact same copper wire that was an access line and reclassified the lines, especially when the wire carried data or was classified as an information service, or was used by a competitor. So 'data' lines, including 'VoIP' lines, or 'IP' lines, or 'special access' lines are all missing from the USTA access line accounting, as are access lines rented to competitors.

And let be clear, this idea that the 'copper wire' should be treated differently when it is used for "IP" is a con. In one AT&T filing, the company claims that there are two networks: The old copper networks, and the new, shiny "IP" networks. The irony is thick. The AT&T U-Verse networks are copper-to-the-home services as they rely on the existing copper wires of the legacy utility networks. The company claims it is 'fiber-based' but the fiber can be ½ mile away. However, add "IP" and AT&T claims that the lines are not access lines because they are used for "IP", Internet Protocol -- with the added benefit it removes all those pesky 'telecom regulations'.

Not counting fiber optic wires is also problematic. Verizon's FiOS services rides on a fiber optic wire that is actually part of the state utility and is classified as 'Title II', common carriage, as told by the Communications Act of 1934. But, Verizon argued in the Open Internet Order that 'Title II' harms investment. And yet, it is clear that, in fact, it is their basis of their broadband investment. In 2005, the New York PSC agreed to allow Verizon to claim that the fiber optic wires being installed were really nothing more than an upgrade of the existing state telecommunications, 'Title II' networks, but this 'switcheroo' allowed Verizon to charge local, copper-based, POTS customers multiple rate increases -- for the fiber optic utility upgrades.

The City, the State, and the FCC, not to mention the USTA, have never done a full accounting of actual lines in service. They have all relied on Verizon-supplied information.

But, the idea that only one class of wires -- regular, POTS, local phone voice calling access lines -- are now the foundation and criteria for 'shutting off the copper' or to be used as the principle policy driver, is ludicrous.

Everything is Wireless? Nah.

"Wireless Only" is also a made-up term with little real meaning. There are those who will pull out the Center for Disease Control's (CDC) reports showing that most households are going 'wireless only'. A closer look at this data shows that it, too, only counts one subset category of lines, residential 'voice calling'. A household can have an alarm system, DSL, or even a Triple Play with cable and high-speed Internet service (which are all still based on wires the last time I looked) and none of those lines are counted by the CDC. Thus, 'kind-of-maybe-wireless-only' may be a better description of their analysis.

Almost Every Cell Site and Hotspot Are Wired

If you examine the list of services that may or may not be not included in access line accounting you'll see something curious. The wires to the cell towers, the wireless hot spots or cell sites are listed because almost every wireless call, download and uploaded video, etc., all end up on a wire -- a Verizon wire, for the most part, in the Verizon territories; AT&T has the same mostly-monopoly control over these wires in their territories.

That's right; you should care about wired lines because it controls your wireless service as well as the wireless market, including the bottom line costs to all competitors. As we discussed elsewhere, the special access lines are used by the wireless, broadband and content providers, with caveats, and Verizon, in its territories, has a monopoly on this market, according to multiple sources.

So, almost every call you make or picture you send or video downloaded with your wireless phone ends up being carried by a wire -- and one company, Verizon or AT&T, mostly controls that wire and the pricing, even to all competitors, in their territories.

Verizon has Invested $3.5 Billion in Fiber Technology in the City -- Not Really.

As we've pointed out, Verizon New York received multiple rate increases on regular phone service for the "massive deployment of fiber optics". It cost the average customer -- (those 2.9 million customers with regular voice service that are still using the aging copper networks), about $750.00 for basic service and about $300 for each additional item, like calling features or unlisted numbers.

In the end, phone customers were charged over $5 billion, starting in 2006 through 2014 for network upgrades.

Thus, customers, it appears, paid for these wired networks; they are defacto investors. Worse, the majority of customers will most likely never get upgraded to a fiber optic wire they paid for. And, it would appear that customers may have paid for the wires to the cell towers and other expenses in this $3.5 billion dollar figure.

Are wires 'necessary'? When you go home at night after a hard day at work, do you relax, take out a beer and pull out your smartphone to watch Netflix? Doubtful.

And 'everything is going wireless' if you manipulate the access line accounting or the fact that almost all wireless communication ends up, sooner or later, using a wire.

The City did an audit of the fiber optic deployments, but it has yet to examine the billions of dollars of cross-subsidies, or even the actual number or working lines -- all lines in New York City; copper or fiber or even coaxial cable.

And while the USTA rep thinks we should be praising Verizon for what it has done in NYC, truth is -- there is a contract to have 100 percent of the City upgraded by July 2014. Verizon never completed this and has been misrepresenting their 'completion' and deployment. Verizon was also able to charge customers billions for upgrades in New York State, and in almost every other state, and those states were also never finished.

I wrote "The Book of Broken Promises; $400 Billion Broadband Scandal & Free the Net" to tell the complete story about how we ended up in this mess and what should happen next, as it is time to fix telecom, not simply congratulate the companies on a job not-well done.

And what should happen about the wireless cross-subsidies? I'll get to that in the next few weeks.