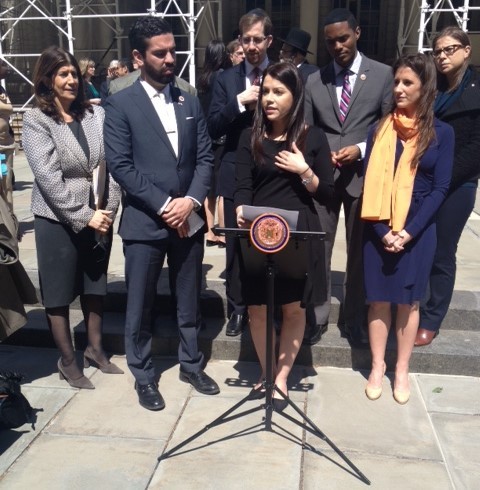 Last year, on the 70th anniversary of the liberation of Auschwitz, New York City approved its 2016 fiscal year budget, which, for the very first time, included a $1.5-million-dollar allocation to assist Holocaust survivors living in poverty. The landmark decision to pass the New York City Council Survivor Initiative was a result of long term advocacy by New York based non-profit organizations, government agencies, and local activists.

However, while the impact of the 2016 New York Council Survivor Initiative is undeniable, there is still so much more that can and needs to be done.

The most immediate and critical needs of Holocaust survivors today include cash assistance for food, help with medical bills and rent costs, and emergency alert systems to ensure their safety and help them live out their final years with dignity. There is an unmet need of roughly $5,000 per person to address and cover the gaps and shortfalls of the thousands of survivors in need. This allocation from the City of New York is an important step in the right direction, and it is imperative that other cities across the United States follow its lead. Government intervention is particularly important in areas where survivors have limited access to social service agencies.

In addition to the financial challenges faced by Holocaust survivors, many also battle chronic and acute illness. Studies have found that Holocaust survivors face a higher incidence of cancer and heart disease, PTSD, and depression from years of exposure to severe famine and stress during the war. As survivors enter the twilight of their lives it is critical that funding be provided to ease the suffering they experience as a result of these medical ailments.

In a bid to continue the progress made by the 2016 New York Council Survivor Initiative by renewing and expanding the public financing budget for 2017, The Blue Card, a national non-profit organization dedicated to providing financial assistance to Holocaust survivors, joined more than 50 survivors, UJA Federation of New York and New York City Council Members on the steps of City Hall.

As a direct result of outreach which began at inception of the budget planning process and followed through to its conclusion, this initiative was not only renewed but also increased by $1 million in the FY'17 budget, resulting in a $2.5-million-dollar allocation. This would not have been possible without the support of Meredith Burak of the Survivor Initiative, Speaker Melissa Mark-Viverito and Council Members Rafael Espinal, David Greenfield, Mark Levine, Chaim Deutsch, and Barry Grodenchik.

As a national non-profit organization, The Blue Card is keenly aware of the needs of thousands of Holocaust survivors across the country; 1 in 4 of whom are 85 or older. We must come together with a renewed sense of commitment to helping Holocaust survivors in New York and across the United States. The New York City Council Initiative is only the first step in the lengthy process of alleviating the suffering of survivors and allowing them to live their final years with dignity.

I urge other local governments to join this effort and allocate funding for direct aid to Holocaust survivors.