Over 37 percent of New York City residents were born in another country, according to a new report, the highest percentage in over 100 years. A record high 3.07 million foreign-born immigrants live in New York City, more than any other city in the world.

For perspective: There are more foreign-born New Yorkers than there are people living in America's third-largest city, Chicago, or roughly the same as the populations of Philadelphia and Phoenix combined.

And unlike at the beginning of the twentieth century, when New York City's immigrant population was primarily European, the city's foreign-born are now from all over the world.

"In just 30 years, what was a city with a population of primarily European origins has now become a place with no dominant race/ethnic or nationality group," reads the Department of City Planning report, "The Newest New Yorkers," which uses data from an American Community Survey conducted between 2007 and 2011. "Indeed, New York’s unmatched diversity epitomizes the world city."

Here are the other major countries of origin: 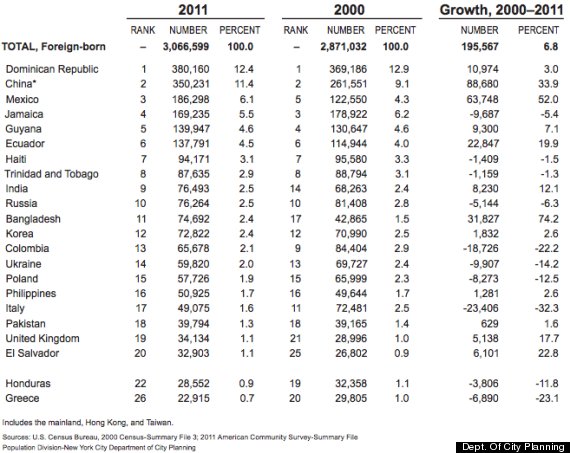 Some other interesting highlights: