For the second year in a row, the number of marijuana arrests in New York City has plummeted, but critics argue too many New Yorkers are still being busted for pot.

In 2013, 29,927 people were arrested in New York City for marijuana possession, according to new data given to The Huffington Post from the New York state Division of Criminal Justice Services. That's a 26 percent drop from 2012, and the lowest rate of marijuana arrests in nine years. 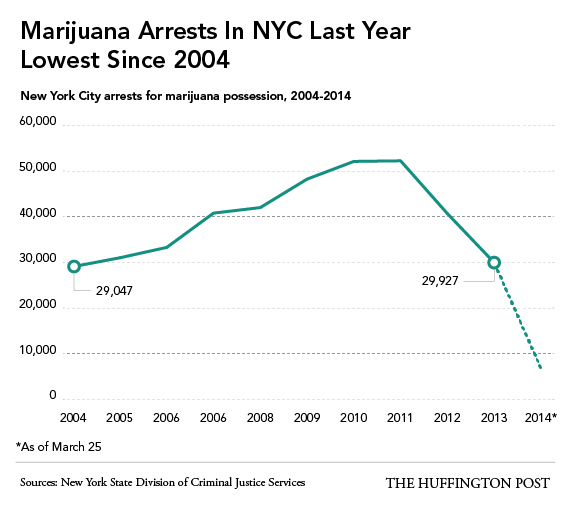 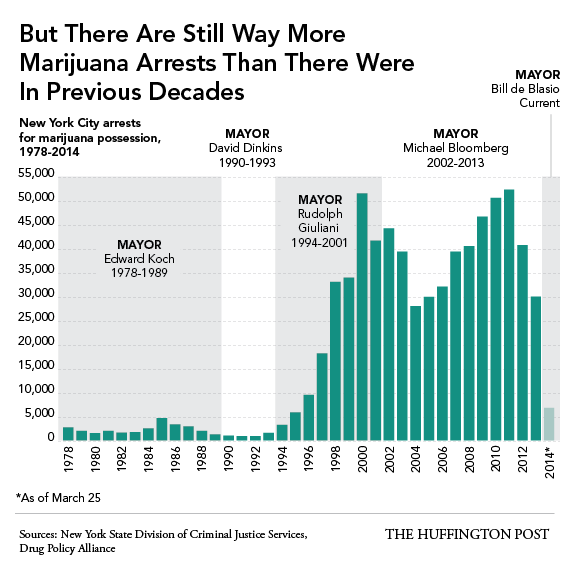 The vast majority of the arrests were for the lowest misdemeanor marijuana charge -- criminal possession in the fifth degree -- in which the arrestee either possessed less than 2 ounces of marijuana, or had the drug in public view. Twenty-eight thousand, six-hundred and forty-six of the 29,927 marijuana arrests in New York City last year were for criminal possession in the fifth degree. That's 98 percent of the arrests.

New York Gov. Andrew Cuomo (D) proposed a plan in June 2012 to get rid of the fifth degree possession charge, but it was abandoned. Meaning that had Cuomo's plan been in place last year, 98 percent of the arrests never would have happened.

Many of last year's arrests were also likely the result of stop and frisks. Possession of under 25 grams marijuana in New York has been decriminalized since 1977. However, since the late 1990s, under the Rudy Giuliani administration, NYPD officers have gotten into the habit of asking the hundreds of thousands of people they stop on the streets each year (85 percent of whom, in 2013, were black or Latino) to empty their pockets.

When the marijuana comes out of the pocket, it becomes "in public view," and authorities can make an arrest for criminal possession in the fifth degree. Former NYPD Commissioner Ray Kelly ordered cops in 2011 to stop bringing marijuana into "public view" during a stop and frisk.

The drop in New York City marijuana arrests over the last two years is correlated with a drop in police stops. 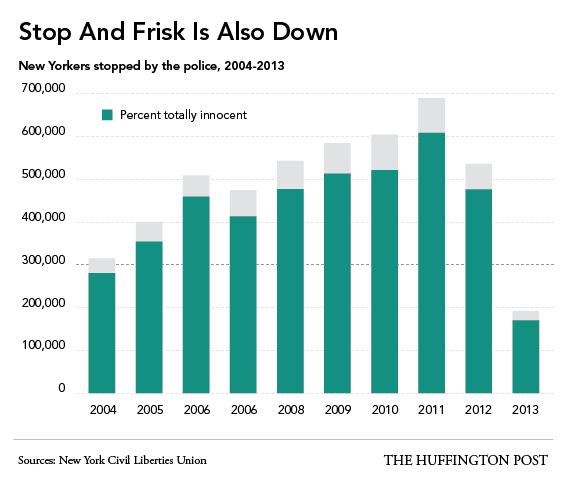 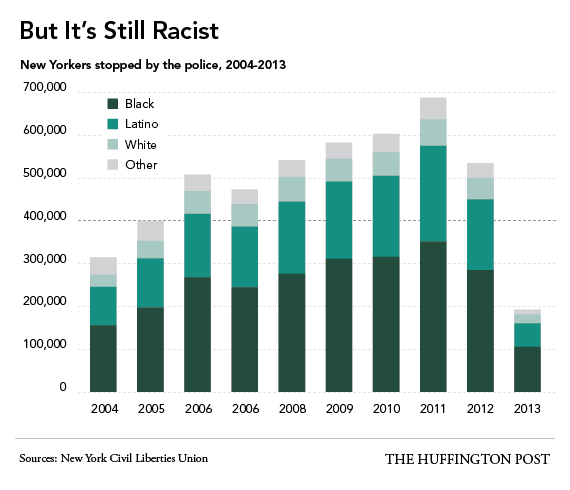 For Gabriel Sayegh, New York state director of the Drug Policy Alliance, the 29,927 marijuana arrests in New York City were 29,927 arrests too many.

"Tens of thousands of New Yorkers are still being arrested for marijuana," Sayegh told The Huffington Post, adding that the majority of those arrested are likely still black and Latino men.

Sayegh also pointed to the financial cost of arresting people for marijuana. Over a 15-year period during the Giuliani and Bloomberg administrations, New York spent nearly a billion dollars on marijuana arrests. The average marijuana arrest costs New York City $1,500, according to a Drug Policy Alliance report. That means that last year alone, by that estimate, the city dropped nearly $45 million on cuffing people for cannabis.

Three months into the administration of Mayor Bill de Blasio, the city is on pace to make about just as many marijuana arrests this year as last, according to Sayegh -- and that is his biggest concern. "This is just shameful," Sayegh said.

As of March 25, marijuana arrests in New York city totaled 6,530, roughly 500 arrests less than the approximate total at this time last year.

De Blasio has been critical of New York's marijuana arrest regimen in the past. His office did not respond to a request for comment.

To cut down the number of marijuana arrests, Sayegh added, "We're hoping to see a real authentic approach from the de Blasio administration."