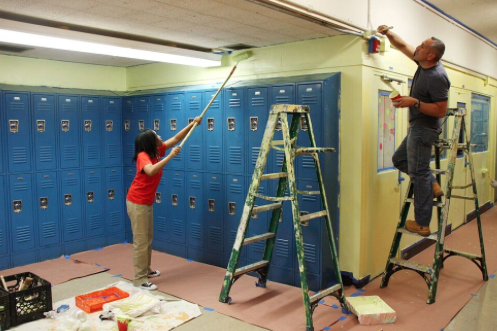 New York City Police officers have been painting with students at a middle school in one of the poorest neighborhoods in Brooklyn. The police officers' goals are to develop positive dialogues with students, the community, and the school. For 15 weeks, weekdays and Saturdays, 22 officers from the 75th Precinct, with guidance from leaders and students in the Publicolor program, have worked together to complete the school's transformation at the East New York Middle School of Excellence. This project builds a bridge of trust between inner city police and inner city teens, which is important to the safety of our communities.

Police Commissioner James P. O'Neill has partnered with Publicolor to start this dialogue of understanding; part of O'Neill's larger initiative of Neighborhood Policing which involves "community partnership, organization transformations, problem solving, and a system of allocating police officers to particular areas so that they become familiar with the local inhabitants."

Ruth Lande Shuman, founder of Publicolor, says, "We see not just willingness, but actual enthusiasm, on the police officers part to participate with these students and this community project. We definitely want to support the NYPD's efforts at neighborhood policing."

The results are real. Last week, a student in the painting program was disciplined and sent home from school. Ashamed and upset, he called one of the police he'd been painting with to walk him home. The officer not only came but offered reassurance--he counseled him, and told him that just because he had done a bad thing didn't mean he was a bad person. Another exceptional officer, Stan DeGolefnea, works five days a week in the school currently being painted. For months, he's volunteered every Saturday in plain clothes to get closer to the community where he works.

In January, the NYPD will again partner with Publicolor for a series of conversations with at-risk students with topics including how to speak to authorities, personal safety on the streets, and bullying. 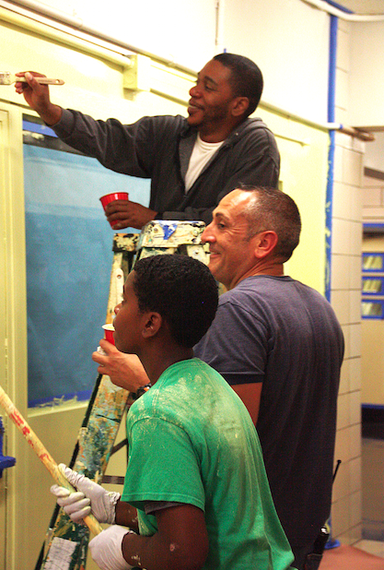 Photos provided by Publicolor. The officers in the photos are PO Nick Milentijevic and APO Brenton Babb.