One hundred and twelve years ago this month, a snowstorm slammed into New York City. "Snow was falling rapidly," reads a New York Tribune article from February 18, 1902, "coming down in large, soft, flakes which filled the air so completely as to make vision across a street impossible, and was blown in drifts by a gale bowling along at forty-knot speed."

When all was said and done, over 15 inches of white stuff was dumped over Manhattan, causing a real mess. "Street cars, overcrowded with belated passengers, were stalled everywhere," the New York Times reported the same day. "Even where the sweepers had been able to keep the way clear the tracks were rendered slippery by the continual fall of snow and the wheels revolved helplessly. On all sides men and women workers bound for Manhattan struggled out of their houses and through snow drifts to the various lines of transportation only to begin a long series of delays varying from a half hour to two hours or more before reaching their destination."

The storm was the worst the city had seen since the blizzard of 1899, and more notoriously the blizzard of 1888, when the temperature dipped to six below, winds roared at sixty miles per hour, and two feet of snow fell. 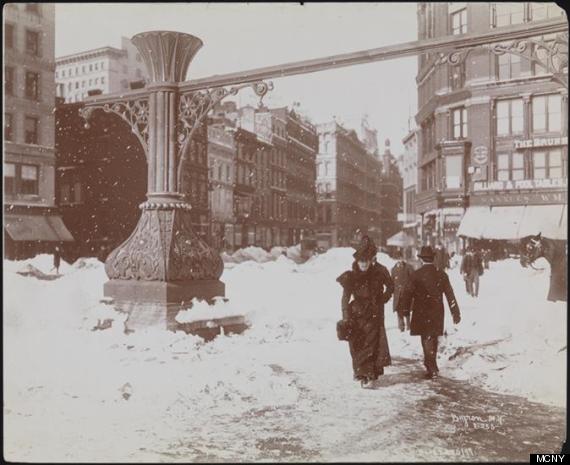 "Pedestrians and an iron gate-post on Broadway at Union Square North in the snow." 1899. Byron Company via The Museum of The City Of New York.

The 1902 storm could have a more important distinction, however, in the annals of American weather history: It could be the first snowstorm to be captured on film.

The Bowery Boys dug up the footage above, shot by the Edison Manufacturing Company, showing horse carriages and trolleys navigating the slippery intersection of Broadway, Fifth Avenue and 23rd Street near Madison Square Park. "This is probably the first film of any American blizzard," write The Bowery Boys. "Primitive film technology had only recently allowed for outdoor filming. [Head of Edison's film division, Edwin S. Porter] and his crew would have been brave indeed dragging Edison's equipment even two blocks through these conditions."

For more, head over to The Bowery Boys.