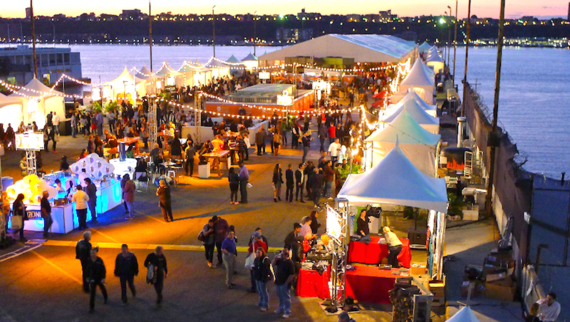 Are you a real "foodie," or do you love the idea of rubbing shoulders with celebrity chefs whom you've been watching for years on the Food Network? Well, your wait is over, because on October 13-16 the New York City Wine and Food Festival (NYCWFF) presents a national, star-studded, four-day event showcasing the talents of the world's most renowned wine and spirits producers, chefs, culinary personalities and America's most beloved television chefs while fighting to end hunger.

Considered the largest food and wine festival in New York City with more than 100 events, NYCWFF is widely recognized for its tastings in celebration of America's favorite foods, intimate dinners with world-renowned chefs, late night parties, hands-on classes, educational seminars, coveted wine tastings and more. Join over 55,000 passionate gourmands and aficionados and you'll sip, swirl and savor the world-class cuisine, wine and spirits served up by more than 500 of the industry's finest.

The 2016 Festival will once again bring together the world's greatest talent to educate palates and entertain attendees in high style. To date, the organization has raised $9.5 million to help fight hunger! 100% of the net proceeds benefit the No Kid Hungry® campaign and Food Bank For New York City.

Read more from ZEALnyc through our Fall 2016 Performing Arts Previews: