Jezebel's Jenna Sauers, along with the help of Noorain Khan and Katie Luscombe took a look at the models who walked at New York Fashion Week last month. Below is a portion of their findings. Take a look and for the full report, click through to Jezebel. All text and graph below courtesy of Jezebel.

We can report that the just ended New York fashion week featured the least racially diverse cast of models since 2008. New York fashion week featured 137 designer runway shows and presentations, and 5,269 different fall outfits were presented to the world's retailers and press. Of those 5,269 looks, 4,468 -- an overwhelming 84.8% -- were modeled by white women. 801 of those looks were given to models who aren't white. Black models were used 384 times. Asian models were used 323 times. Non-white Latina models were used 79 times. Models of other races only made it onto the runways of New York City -- one of the most racially diverse places on this planet -- 15 times.

To find out who didn't show any models of color, head over to Jezebel. 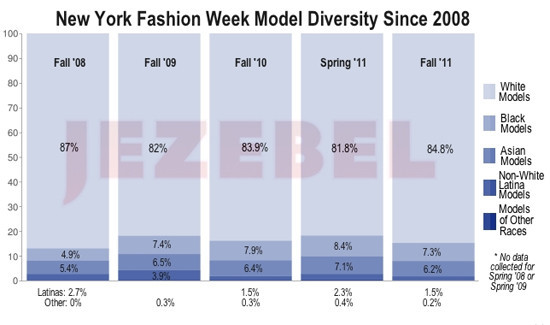