The first confirmed case of Ebola in New York City understandably has city-dwellers on high alert. Health officials and infectious disease experts urge New Yorkers not to panic; Ebola is highly unlikely to spread to epidemic proportions in the city.

Still, one of the most effective tools officials have in making sure the deadly virus doesn't spread is monitoring the movements and contacts of those who are infected. Here is what we know about what Dr. Craig Spencer, the fourth person to be diagnosed with Ebola in the U.S. and the first case in New York City, did and where he went since his return from working with Doctors Without Borders in Guinea.

Sunday, October 12
Spencer finishes his work in Guinea with Doctors Without Borders.

Tuesday, October 14
He leaves Guinea and travels through Brussels, Belgium.

Tuesday, October 21
Spencer begins to feel sluggish, but health officials emphasize that his symptoms have not yet begun, according to the Boston Globe. He visits the restaurant The Meatball Shop, the High Line park, the Blue Bottle Coffee stand and rides the 1 train, New York City Department of Health and Mental Hygiene Commissioner Mary Bassett, M.D., said in a press conference Friday.

Wednesday, October 22
Spencer goes for a three-mile jog along Riverside Drive and Westside Highway. He has contact with three people, including his fiancee, Morgan Dixon, and two friends, CNN reported.

He later rides the A and L subway lines to The Gutter, a Brooklyn bowling alley, and takes an Uber taxi back to Manhattan around 8:30 p.m.

Thursday, October 23
Spencer develops fever and nausea, both symptoms of Ebola. When his fever spikes to 100.3 degrees Fahrenheit (not 103 degrees, as was first reported), he and Dixon make a joint call to authorities around 11 a.m. to report his symptoms and travel history, ABC News reported. Spencer is taken to an isolation ward at Manhattan's Bellevue Hospital, one of eight New York hospitals designated for the care of Ebola patients.

The Gutter bowling alley voluntarily closes, writing on its Facebook page, "We are working with the NYC Health Department to have the bar cleaned and sanitized under their supervision."

Spencer tests positive for Ebola later Thursday night, becoming the fourth person to be diagnosed in the U.S.

Friday, October 24
Spencer remains hospitalized in isolation and in stable condition, Bassett said. The CDC has confirmed Spencer's positive test results. Health officials visit The Gutter and Blue Bottle Coffee and clear both for business. Spencer's fiancee as well as the two other friends he had close contact with have all been quarantined and are not showing any symptoms, and his apartment is locked and isolated, Mayor Bill de Blasio said in a press conference. The car service driver is deemed to have had no contact with Spencer. Health officials visit The Meatball Shop and expect it to reopen at 6 p.m. 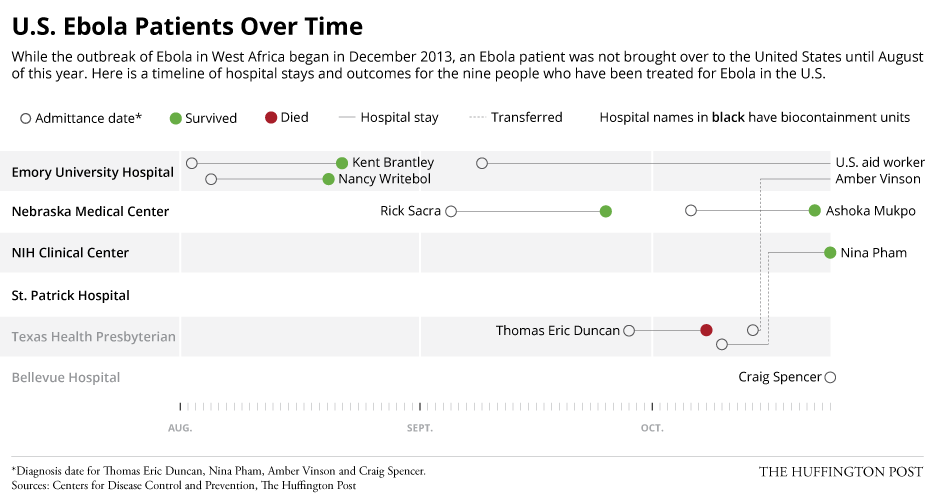