Attended by watchful teachers and awash in conversations about school reform, World Innovation Summit for Education is the latest forum to mesh education and technology. Recent changes in the quality of education everywhere can be traced to the WISE Summit -- more than one thousand academic leaders and policy makers gathering for three days to discuss educational reform and emerging trends with unflagging enthusiasm. Completing its fifth annual conference recently, the international initiative is financed by the Qatar Foundation, a government-funded nonprofit organization for education, science and community development. By introducing gaming into the conversation surrounding community development , they added a special dimension to the theme of the summit, "Reinventing Education for Life." Public narratives around gaming may elide anything as personal as culture or religion, but the summit hoped to occasion a sequel that would incorporate the Arabic landscape into educational gaming.

Katie Salen, Executive Director of the Institute of Play, a nonprofit in New York dedicated to harnessing the educational potential of games, presented "PLAY 160" during the summit at the Ceremonial Court in Education City. PLAY, a cultural program to explore the world of game-based learning, is a selection of more than 40 game-based learning tools from all continents and includes a large-scale installation. Salen was invited by WISE to work with the art collective Trafik, renowned for conceiving interactive artworks, on designing a public program.

This is just the beginning. It's for a population that has maybe never thought about game-based learning. The goal is to expose them to it. In New York the conversation has really evolved over the past couple of years around games. In this part of the world, the conversation hasn't been had. So this is a playful way to start the conversation,

said Katie, who was also on the advisory board for Games for Change in New York City, an organization that uses digital games for social change. "There's innovators everywhere who are building software, why not turn their attention to building games that might be good for education?" The games showcased have a social justice component, including a set of games that address urban planning and sustainability and several games that look at the issues of empathy and collaboration . The local community is invited to enjoy the free, hands-on access games, which cover topics from math to science to digital citizenship and are cross platform with examples on ipads, mobiles and consoles.

As the President of Games for Change in New York, Asi Burak, is well-positioned to weigh in on Katie improving the quality of education with educational technology.

Games are becoming the most dominant media in the 21st century. In March this year we launched Half the Sky Movement: The Game on Facebook, which is centered on girls empowerment. Seven months later we reached 1.1 million people globally and discovered a very surprising fact -- among the top five cities, those who play the game the most are Cairo and Istanbul.

Dr. Ann Doucette, the Director of The Evaluators' Institute at The George Washington University, was also invited to Qatar to consult on evaluation effectiveness in the school system.

If I had complete control, I would do all education achievement testing using serious gaming because it can simulate real world events. There has been a lot of discussion in terms of global citizenship here. It can actually incorporate a lot of diversity. You can incorporate culture but it needs to be sensitively incorporated.

She thinks the espoused strength of gaming is that it can improve pedagogical methods.

When children are memorizing theorems and geometry, they don't see the connection in terms of how to build buildings or where to put a slide in a playground. They lose the whole concept of what education is about. There's so much information on the internet, so when children are rote memorizing things and waiting for a higher authority to tell them what's true, they're not going to have the skills to allow them to differentiate high evidence versus evidence that's not credible.

If there's one lesson that comes from the WISE summit, Doucette thinks it revolves around game capability and moving teachers to a more prestigious status so they can teach these games.

Teachers from the regions should be involved in the content so it resonates with sensibility of the students in their region. They need to look at teachers as trusted professionals, trust their judgment, pay them accordingly, and provide educational support and continued training. Teachers can help to inform the content. We need to feed back information from the testing we're doing to the teachers so that they can know which child needs what kind of help, instead of teaching the children as a homogenous group.

Katie wasn't able to locate an Arabic religion game in her searches that met her selection criteria and she didn't have time to consult with Qatari teachers in a formal way, but she hopes to do so on her next trip. His Excellency Dr. Sheikh Abdulla bin Ali Al-Thani , Chairman of WISE, has been very professorial about educational technology but he, too, enjoyed using PLAY and joked that he was embarrassed to spend a long time playing at the installation because he was having so much fun. He jovially confessed that he'll go to PLAY in the evening to enjoy it when no one is there. "Education should not always be boring. You can get education many different ways. We feel culture and education go nicely together," said His Excellency. Dr. Abdulla, who describes himself as a passionate educator and an inquisitive learner, continues to support Katie and anticipates that there will be organized tours for local teachers in hopes of gathering some feedback from them. "We cannot bring students without teachers," he noted. It's very expensive to do gaming and possibly having to train teachers to use these games but there are public work authority construction signs enclosing Education City that read "Qatar deserves the best." So, what is the best? His Excellency explained:

We need to ensure our education system is producing what's needed to build this country, that it's meeting the needs of the individuals, families and society. We have to keep up to date with the latest trends and delivery of education. I always look at the reward, if the reward is good, then expense is not relevant.

Katie plans to reach out to Middle Eastern teachers for her future projects. When asked what she'll do if she concludes that there is actually no community interest in games in Qatar, "Then we'll just keep working because we think it's quite a valuable strategy." 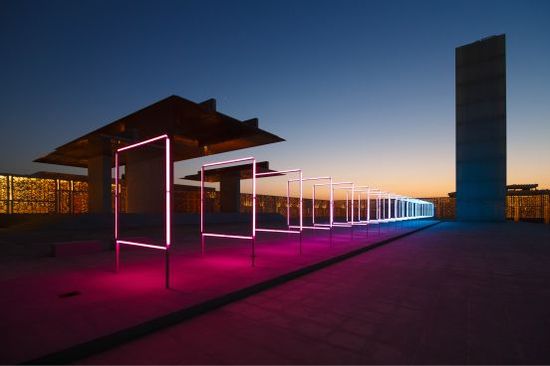