NEW YORK -- New York City residents took to the streets on Wednesday after a grand jury said it would not bring charges in the death of Eric Garner, a Staten Island man who died in July after a police officer placed him in a chokehold.

Garner, 43, was being arrested for selling loose, untaxed cigarettes on July 17 when New York City Police Officer Daniel Pantaleo placed him in an illegal chokehold. The medical examiner ruled Garner's death a homicide, but the grand jury said Wednesday it would not indict Pantaleo.

Demonstrators gathered across the city, from the Staten Island neighborhood where Garner died to high-traffic areas in midtown Manhattan. They assembled in Times Square, Union Square and Lincoln Center. They marched down Broadway and blocked traffic on the West Side Highway. Police scrambled to keep the crowd from disrupting the Christmas tree lighting ceremony at Rockefeller Center. Nearly three dozen demonstrators were reportedly arrested, though the protests remained largely non-violent.

Late in the afternoon, a group of people appeared at Grand Central Station to stage a “die-in.” Protesters stretched out on the terminal floor to represent victims of police brutality. Police, who have been preparing for days for the protests, stood by. 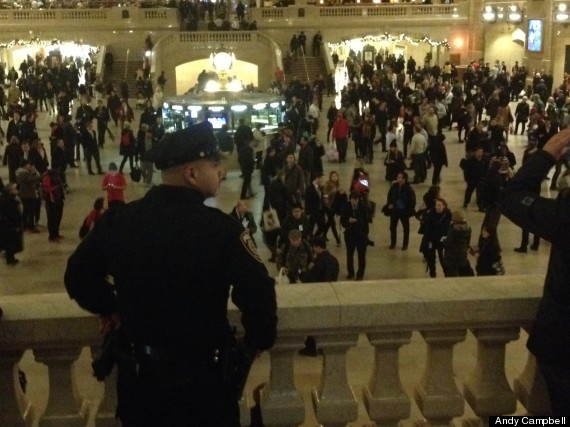 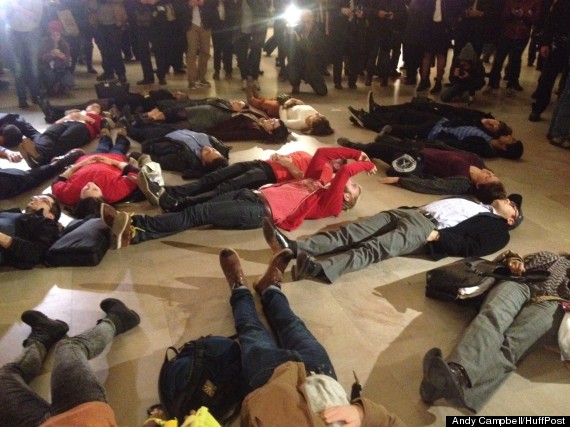 The protesters then marched toward Times Square, where they met up with a crowd that had already formed there. They moved through the streets, blocking traffic on Madison Avenue and heading north.

Near Times Square, protesters chanted "I can't breathe" and "Garner and Brown, shut it down," cheering as drivers in bumper-to-bumper traffic honked in unison. 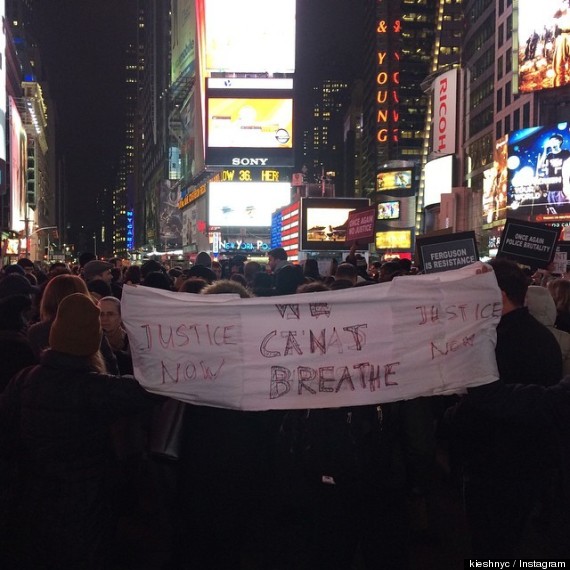 Jayson Williams, 32, of Staten Island, was among the protesters who gathered at Rockefeller Center. He said he joined the protest because he was moved after hearing Garner's family speak.

"[Garner's family] wants peace, they'll get peaceful protest," he said. "But the NYPD should want peace too. And our justice system should want justice. If an unarmed man is killed, the person who killed him should go to trial."

Harlem resident Brianna Miller, 26, who also joined the protest near Rockefeller Center, said demonstrators would "stay out here until the justice system wakes up."

"This is about racism and the way we're treated, but it's also about equal treatment for authorities who are supposed to protect us," Miller said.

Police set up barricades to block the demonstrators from disrupting the tree-lighting ceremony at Rockefeller Center. An NYPD public information officer could not immediately confirm reports of arrests in the area.

Starting at about 8 p.m., a crowd of about 300 demonstrators marched from Times Square to 125th Street in Harlem, chanting, “No justice, no peace! Fuck the police!” As they passed through the Upper West Side, dozens of residents came to their windows to watch.

Tyra Morrissett, 39, marched around Times Square carrying a sign that insisted her life is worth more than 75 cents, a reference to the tax Garner was allegedly avoiding by selling loose cigarettes.

“Today I realized, America has no regard for my life,” Morrissett said, as tears rolled down her cheek. “And that really hurts my feelings. I’m so heartbroken right now, I can’t describe what it meant for us to not get an [indictment].”

Morrissett recalled that in Mobile, Ala., where she grew up, black and white people kept in their own “lanes.” But she expected something different in New York City.

“I was under the impression that when I stepped off the plane at JFK, that I could be equal,” she said, “and today that’s not true.”

Protesters shut down part of the West Side Highway in NYC, photo via @CBSNewYork's chopper: http://t.co/dLuDPTcrH8 pic.twitter.com/7kbDnPFpls

At 10 p.m., hundreds of protesters took over the main terminal of Grand Central Station. The group chanted, “What do we want? Justice! When do we want it? Now!” Diners sipped champagne in one of the terminal’s restaurants, and one of them appeared to flip off the protesters.

A crowd of protesters attempted to march into the Lincoln Tunnel at 10:30, but were blocked by police. Traffic in the tunnel was obstructed for about a half hour.

A car was found torched outside the 77th Precinct in Crown Heights, Brooklyn, around the same time. An NYPD spokesman said it was unclear whether the incident was connected to the protests.

The car was not an official police vehicle, the spokesman said, adding that no arrests have been made in connection with the incident, and an investigation into it is ongoing.

Meanwhile, in the Tompkinsville section of Staten Island, a crowd gathered shortly after the grand jury decision was announced at the spot where Garner was killed.

Kevin Buford, a Staten Island resident, said he knew Garner before he died. Buford called him a nice, decent man who "would help you out if he could."

"[But] even if he was an axe murderer, what happened to him shouldn't have happened by so-called New York's finest," Buford said.

Buford wore a shirt that read “I am Sean Bell," in reference to a black man who was killed by NYPD officers on the morning of his wedding in 2006.

“I am Amadou Diallo. I am Ramarley Graham. I am Michael Brown,” Buford said, naming other black men who have been killed by police. “I am every black man that has been lynched."

Check out more photos from the protests: 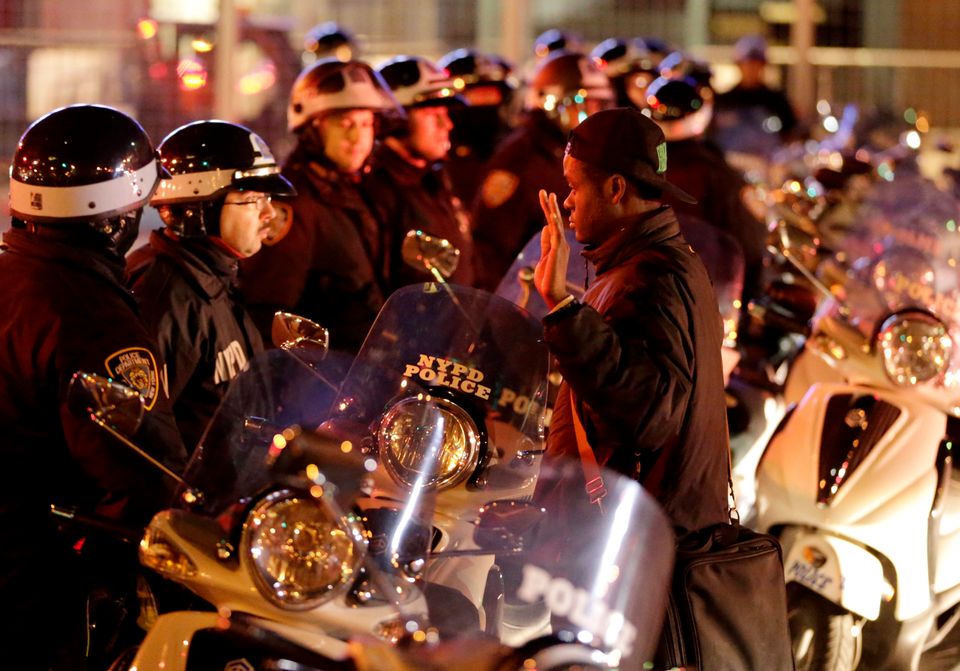