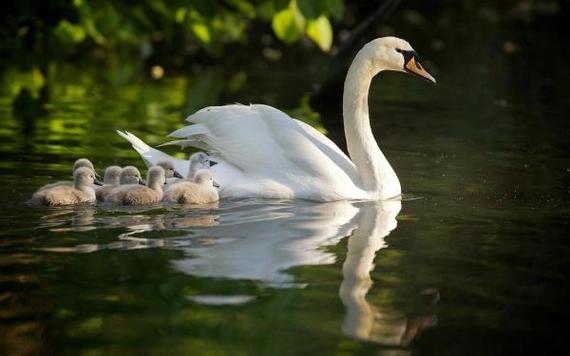 The third time around may be the charm for New York State's embattled mute swan population.

For the third year in a row, the state assembly and senate have each reintroduced a bill that calls for a two-year moratorium on a controversial plan to wipe out the state's 2200 free-roaming mute swans.

The legislation also asks the State Department of Environmental Conservation (DEC) to provide solid research behind the proposed annihilation.

Are mute swans really the messy eaters that the DEC claims in its swan management report, uprooting vegetation in such a way as to prevent plant regeneration? Are they aggressive toward people and other wildlife, as the DEC also claims? Or are they being unjustly persecuted for another reason?

The DEC isn't talking. Nor is the Bureau of Wildlife, the little-known entity within the DEC described as responsible for managing the state's wildlife.. However, waterfowl specialists, including Edita Birnkrant of Friends of Animals, a national advocacy group, say the accusations don't hold up.

"Waterfowl generally eat vegetation and the swans are no different in that respect," says Birnkrant.

The favored eelgrass, a flowering plan that swans devour, also periodically renews itself.

Birnkrant also points out that the state's mute swan population is tiny compared to that of other countries where, she adds, the gentle creatures are also protected and revered.

New York is also the first of four states where there has been an organized fight by both the public and the legislature to protect its swans. (Michigan, Maryland and New Jersey are the others.)

"It's simply inhumane to kill these swans without proof that they are dangerous to anyone," says State Sen. Tony Avella, who reintroduced the legislation to the senate.

Gov. Andrew Cuomo has twice vetoed the legislation. (The governor's press office did not respond to inquiries about the possibility of passage of the current bill.)

However, given the universal popularity of the swans, New Paltz resident Peter Muller, founder of the League of Humane Voters, hopes the governor has a change of heart.

"The bill would halt a grotesque proposal to kill or cripple all the mute swans in the state," he says. "It would also allow unbiased experts to weigh in on the DEC's reasons for the removal of this beloved bird, but the governor is in tight with the Bureau of Wildlife, which is beholden to hunters."

And therein lies what may be the real reason for killing the swans.

Waterfowl researchers, swan specialists and others say that the New York swan removals are part of a massive national effort to revive sports hunting.

Wildlife officials want to use its habitat to introduce the trumpeter swan -- North America's largest waterfowl -- and a species that Sheila Bolen, one of the world's leading conservationists, says is more conducive to trophy hunting.

"The trumpeter is the designated game bird," says Bolen, adding why hunting has lost its appeal. "The economy is a factor, there is boredom with the sport and no real incentive to hunt."

Once the mute swans have been exterminated, then the trumpeters, which currently roam Canada and the northern tier of the U.S., will be introduced into those habitats. Eventually, as their numbers increase, she says, the habitats will be opened to hunters.

A report from The Atlantic Flyway Council backs the premise that the USDA's Wildlife Services - in cooperation with local wildlife agencies - has been systematically planning to wipe out mute swan populations throughout the nation for more than a decade.

Karen Stamper, who is heading an effort to save thousands of mute swans in her home state of Michigan, says passage of the New York bill also carries implications for other states.

"The governor waited until the last minute to veto the bill," she says. "Our wildlife should not be left in the hands of politicians or agencies whose salaries are tied to hunting,"

Both Shirley Bolin and Peter Muller, who is also active in a group in New York called The Committee to Abolish Sport Hunting, say their individual research indicates that the bureau relies financially on sales from hunting, trapping and fishing licenses to survive.

The Bureau of Wildlife would not release a copy of its annual budget. (I have filed a Freedom of Information Act request.)

However, the DEC's Division of Fish, Wildlife and Marine Resources, which oversees the Bureau of Wildlife, lists primary funding -- but no amounts -- as sales from hunting, fishing and trapping license fees as well as a percentage from a federal excise tax on firearms and ammunition. The wildlife portion of the excise tax, known as the Pittman-Robertson Act, provides funding for wildlife conservation and sportsmen education. Funding also comes from federal grants and taxpayers.

And because mute swans roam public lands, taxpayers would also be footing the bill for proposed exterminations.

Swan brutality also comes into play. Aside from shooting, wildlife officials also maim (break the legs of) adult swans to contain them.

Sen. Avella says he was in disbelief last June when three wildlife agents shot two parent swans from an unmarked boat in a park in upstate New York.

"To say that this was a horrific and inhumane incident is an understatement," he says, of the shootings that also took place in front of families.

Anne Muller who, like husband Peter is a wildlife advocate, says it would be tough for those young swans to survive without their parents to guide them.

"In addition to the emotional trauma of losing their parents, it leaves the youngsters vulnerable to predators," she says.

When I asked the Bureau of Wildlife why the swans were killed, if the young could survive without their parents, and why the shootings took place in front of families, Lori Severino, DEC public information officer, emailed that " DEC does not comment on pending legislation".

"If New York passes this bill," she adds, "It will help save mute swans in other states."

How you can help
The assembly has passed its swan bill (A09289) but the senate needs a nudge to get it to the senate floor (S06630).Contact Sen. Avella's office: (518) 455-2210 or the district office (718) 357-3094, to urge passage by June. Assemblyman Steven Cymbrowitz, who reintroduced the swan bill in the assembly, is urging people to sign a petition that "sends a strong message to the senate and Gov. Cuomo that New Yorkers don't believe our mute swans deserve to be killed".