Everyone knows New York City is one of the most expensive cities in the U.S. But did you know its inflation-adjusted minimum wage ranks among the lowest of the major cities too?

The city's problem is that the state government sets its minimum wage, not local government. That means that even though it's 2.4 times more expensive to live in Manhattan than Buffalo, the minimum wage is the same in both places, as New York City Comptroller Scott Stringer pointed out in a recent report. 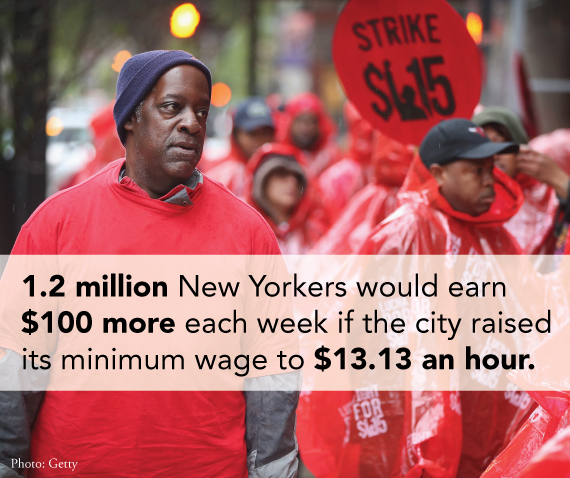 That would help a lot of New Yorkers. In fact, according to Stringer's report, a minimum wage of that size would put an extra $100 in the pockets of 1.2 million New Yorkers each week.

“New York City deserves the ability to set its own minimum wage,” Stringer said in a press release. “We are falling behind other states and cities when it comes to the minimum wage, despite the fact that this is the most expensive city in which to live in the nation. There is no one size fits all when it comes to the minimum wage; raising it to $13.13 would make an enormous difference for more than one million New York City residents.”

The report doesn't attempt to measure whether such a higher wage would cause employers to cut jobs. Instead, Stringer points to research that businesses will adjust to higher wages through a "combination of higher prices, lower profits and increased efficiency," rather than reduced employment. He also cites research showing that higher wages cause an increase in spending by low-income households, which then benefits local businesses.

The bill's future is uncertain. The legislative session ends this Thursday and while Democratic Governor Andrew Cuomo has expressed support for the bill, Republicans in the state Senate have come out against it.

Workers from across the state will rally in Albany Tuesday to call on legislators to pass the bill.