PHILADELPHIA -- Imam Abdul Muhammad said attendance at his Newark, New Jersey, mosque dropped by half. Farhaj Hassan said he feared for his position in the Army Reserve. But to New York City, those harms were entirely self-inflicted.

The two sides argued Tuesday in the U.S. Court of Appeals for the 3rd Circuit over the New York Police Department's sweeping program of spying on Muslims. The three-judge panel did not tip its hand as to how it might ultimately rule, but it grilled a city lawyer on his claim that damages from the surveillance were speculative.

The hearing came as New Jersey Muslims attempt to revive their lawsuit against the NYPD surveillance program. As first revealed by The Associated Press, the city's police officers crossed the Hudson River to spy on mosques and even photograph a Muslim girls' school.

The city says it was all necessary to provide demographic information about where terrorists might hide. But in court, plaintiffs' lawyer Baher Azmy, the legal director at the Center for Constitutional Rights, called it "a blunderbuss suspicionless surveillance program where the only search criteria is religion."

U.S. District Judge William Martini, a George W. Bush appointee and former congressman, concluded differently in February. He dismissed the Muslim plaintiffs' lawsuit, finding that the surveillance program was based on New York City's legitimate fears. Any damages from the surveillance, he said, only came about because the AP published its stories.

The three appeals judges seemed to take little stock of Martini's argument about the AP. Instead, they zeroed in on whether the 11 Muslim plaintiffs, who range from an association of clerics to a beef sausage company, could plausibly argue that they suffered actual harm.

The judges pressed New York City lawyer Peter Farrell on whether they had to accept the Muslim plaintiffs' argument that they should be given the benefit of the doubt on whether their businesses and mosques really suffered because of the surveillance.

"Loss of attendees at a mosque is a concrete injury, isn't it?" asked Judge Jane Roth, a President George H.W. Bush appointee. "It's not a subjective fear to know that the mosque I want to go to is under surveillance."

Farrell, meanwhile, defended the city by pointing to U.S. Supreme Court cases that have set a high bar for plaintiffs challenging surveillance and racial discrimination. In 2009, the court ruled against a Muslim Pakistani who was imprisoned after 9/11, finding that his claims about government discrimination needed to be irrefutably supported by factual claims.

"All the injuries that they allege are self-imposed injuries based upon subjective fears," said Farrell. "The police department is not prohibiting anybody from attending a mosque."

The city lawyer argued that if the New Jersey Muslims' suit were allowed to stand, any business owner could sue the NYPD for posting officers on its street. Roth countered that the plaintiffs in that case would need to show a pattern of people in their religious or ethnic group being targeted.

Azmy, the lawyer for the Muslim plaintiffs, also came in for questioning. He was asked what proof he had that the city really did have a policy or practice of targeting Muslims just because they were Muslims.

Given what happened on 9/11 and the Paris attacks of last week, asked Roth, couldn't the city show that it had legitimate reasons for focusing on mosques? "If you go to the Baptist church, you aren't going to find out anything that's relevant, are you?"

Azmy said there were legitimate reasons for surveillance of suspected criminals, but not for spying on Muslim girls.

The judges did not indicate when they might rule on the appeal. Since the lawsuit was first filed in June 2012, Bill de Blasio (D) has replaced Michael Bloomberg (I) as mayor and struck a more conciliatory tone on policing in general. De Blasio and new Police Commissioner William Bratton disbanded one of the city's spying units in March 2014.

Yet despite settlement negotiations in related cases against the surveillance program, the city has shown no signs of bending in the New Jersey lawsuit.

After the hearing, plaintiffs and their lawyers expressed optimism that the appeals judges will overturn Martini's ruling.

"We definitely put a good foot forward," said Hassan, who as lead plaintiff in the case claims that the surveillance could put his Army security clearance at risk. "Today was a very, very good day for America."

PHOTO GALLERY
Protestors Around The Nation March Against Police Violence 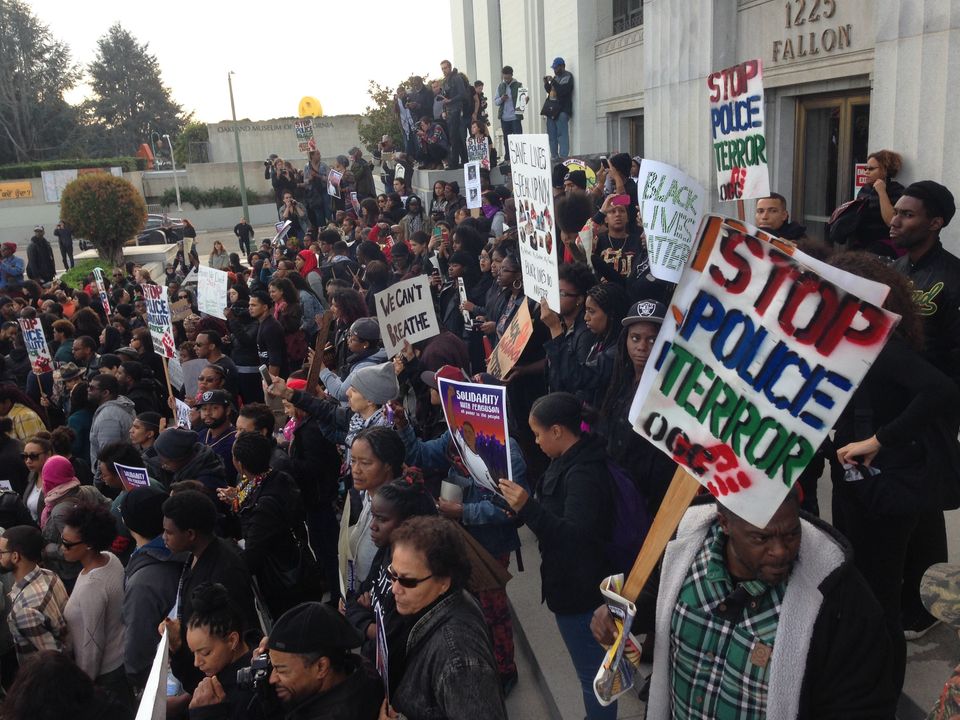