A long, long time ago, in a magical land called New Amsterdam, a group of brave Americans said, "Lo! Let us bring into this world a majestic city on the island of Manhattan, where the titans of finance shall indulge themselves evermore in the frolicsome pastures of the free market."

And so it came to pass that in the City of New York, on a Street of Wall, in the District of Finance, the lords of Mammon gathered. With money in hand, they unleashed a wave of lobbyists to go at the firewall between commercial and investment banking known as the Glass-Steagall Act as if they were New York City cops having their way with Abner Louima. The barricades to wealth thus destroyed, the storied firms of Wall Street set about inventing newer and escalatingly insane ways to make money and sow massive systemic risk, in the form of hyper-complicated synthetic derivatives created out of the befouled sludge of terrible, ill-considered home loans.

Everything was going just great until about 2008, when these massively overleveraged firms and their deeply interconnected financial products caused the economic equivalent of the Triangle Shirtwaist Factory fire, plunging the nation into the steepest economic crisis since the Great Depression (which, while it was a "depression," was nevertheless, "great," right? I mean everyone forgets that, don't they? And how much pluckier we all became through massive nationwide suffering!).

At which point, the chastened Financial Titans unleashed their lobbyists again to go to Washington, DC and tell lawmakers, "We hit a bit of a snag, and will need all of America's money, please! We'd very much like to get back to selling poop bubbles to one another, right away!" And those lawmakers, who themselves had deep and abiding connections to sage experts who came direct from all of Wall Street's now-failed firms, bravely took billions of taxpayer dollars and said, "We shall just make this check out to 'Cash,' Love, Hank Paulson, xoxoxo."

And all was well until a young Muslim socialist named Barack Obama said, "Hey, maybe we should do something that will make it so we don't ever again get plunged into a merciless recession? I mean, nothing too radical, since my own Treasury Secretary is essentially the midsection of a human centipede that includes Lloyd Blankfein and Jamie Dimon, etc! But we will call it reform, and hope for the best!"

But all this talk of maybe doing something half-assed about the massive failure that caused a nation of dutiful taxpayers to suffer soon filtered back to some (sym)pathetic journalists at the New York Post, who took to their tabloid to wail, "DO NOT KILL OUR GOLDEN GOOSE, NOBAMA! For our fair city entirely depends on these golden eggs filled with toxic offal. The rest of the nation will have to learn to live with it, and, indeed, be willing to once again hand over all their dollars and nickels and dimes when we bring everything down again." 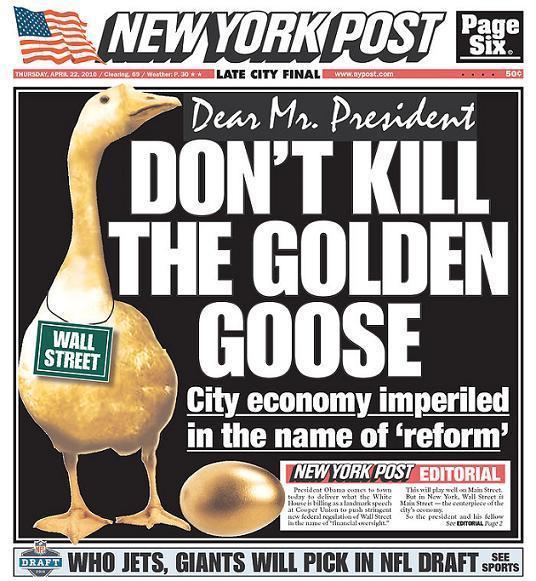 In other news: who will the Giants and Jets pick in the NFL Draft? If they love their city, they'll pick some collateralized debt obligations, filled with swamp water and the bodies of dead rats found under the F train.