A New York Post cartoon (see below) published Saturday, February 24th portrays New York City Muslims as would-be terrorists complaining to the Associated Press that the NYPD is spying on them.

The cartoon is by Sean Delonas, the same Post illustrator who depicted President Obama in 2009 as a chimpanzee, shot and killed by police for writing the stimulus bill.

The ongoing investigation by the AP into the police department's widespread surveillance of Muslim businesses and mosques revealed that the program--the constitutionality of which is under debate-- was conducted with assistance from the CIA and funded in part by the White House.

The spying focused on New York City's (and New Jersey's) innocent Muslim communities solely because of their religion, as well as Muslim groups at colleges across the Northeast.

Gothamist spotted the cartoon Saturday and reached out to News Corp., the Post's parent company, for comment.

After the Obama cartoon--which many slammed as racist and inflammatory-- the company said it would form a "diversity council," to prevent its editors from publishing more racist cartoons. It is unclear if that council still meets today. 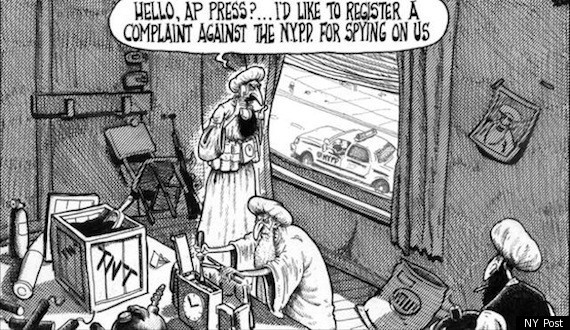