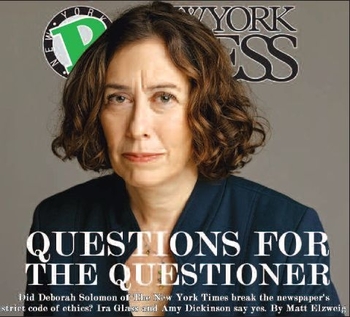 Today the New York Press has a stinging indictment of the New York Times magazine's Deborah Solomon's interview tactics, but also of how the NYT addresses complaints about its reporters.

First, Solomon: NYP staff writer Matt Elzweig had intended to write a straight profile of Solomon, whose NYT mag page features zippy, provocative and sometimes semi-pugnacious interviews with a wide range of prominent subjects. The interviews are characteristically succinct, both in the questions and the responses, and it will surprise no one to learn that they are edited. However, in the course of his reporting, Elzweig learned from two prominent subjects, NPR's Ira Glass and advice columnist Amy Dickinson, that the Solomon's question-and-answer methods were somewhat less than straightforward:

Both Glass and Dickinson, without any prompting and in significant detail, told me that in the published versions of their interviews, Solomon had made up questions, after the fact, to match answers that, at least in one instance, she had taken out of their original context... [Dickinson] described an exchange that she says "didn't happen" during her interview, that she said Solomon put together using her quotes. Glass went even further; of one exchange, he said that "she never actually asked that question," and added that Solomon "was changing context in a way that changed what I meant."

Elzweig goes on to lay out in meticulous detail the circumstances involved in each incident: In Dickonson's case, she claims Solomon printed an exchange that "didn't happen" by inserting new versions of question and follow-up around a snip of Dickinson's longer commentary, and in Glass' case, he claims that Solomon seized on a snippet of commentary regarding the Showtime network, the home for his TV show (that he didn't know many people talking about Showtime), and asked a follow-up (isn't it cocky of you not to appreciate them?). Glass said that Solomon excerpted that snippet as an answer to an unasked question — "What do you think about Showtime?" — and then truncated his effusive response to the "cocky" question, the overall effect of which was to imply that Glass was disdainful of the network. (Elzweig makes a point of noting that both conversations were taped).

Elzweig has it all spelled out in the article here, but we all know that three's a trend, and this piece rang an instant bell — because the exact same claim was made by Tim Russert after his interview with Solomon in May 2006. It ran on Mother's Day, in the press run-up to Russert's new book Wisdom of Our Fathers, and in the interview Solomon challenged Russert on why he had nothing to say about his mother on Mother's Day, characterizing him as being evasive. Here is the excerpt as it ran:

Since you're fond of recalling the many virtues instilled in you by your father, a retired sanitation worker in Buffalo, can you tell us what your mother taught you?

In the "Big Russ" book, I talked about Father Donovan, our local pastor, who every Mother's Day would say, "The hand that rocks the cradle rules the world."

It clearly made an impression on me, because it's something that my mom and I talked about all the time.

You still haven't answered the question of what your mom taught you. What do you do on "Meet the Press" if your guests fail to answer your questions?

It's so interesting. Do I sometimes feel internally like I should lean over and just shake this person and say, "Please answer the question"? Of course I do. But I do not want to make them the least bit sympathetic. For me to inject myself or become personal, I think would probably make the guest very sympathetic, and I don't want to do that.

Russert was NOT happy with the interview, which he claimed misrepresented his comments about his mother. In an angry letter to the Times, he detailed specific memories of his mother, who had died the previous August, that he had spoken of during the course of the interivew, including stories about her and things she had taught him. Per Howie Kurtz:

Russert says those two questions were run together -- leaving out a long answer about his mother and skipping directly to his response about the program -- in a way that made him look evasive.

Reading the piece, it does seem like an odd thing for Russert to do, jump to an answer about MTP while completely ignoring Solomon's challenge about his mother. In his letter, Russert called it a "deliberate mischaracterization of our conversation" and reiterated that Solomon had "combined questions in her piece, suggesting I did not offer separate and distinct responses to each of her questions, which, of course, I did."

So! Three's a trend. A sort of disturbing trend. We'll see what other people come out of the woodwork with this, because if it's something Solomon has a history of there will be other nonplussed interviewees with a story to tell.

Now on to the response of the New York Times. Solomon had originally agreed to the profile with Elzweig, but follow up emails and phone calls by Elzweig and NY Press editor David Blum were not responded to. Once Elzweig had spoken to both Dickinson and Glass and had realized where the story was headed, he contacted NYT spokesperson Catherine Mathis and explained that he could not get in touch with Solomon, asking to speak with an NYT mag editor who could respond to the allegations raised. Mathis responded with a statement which read in part: "The editors of the column assure themselves that the Q-and-A, which obviously must be boiled down from a much longer rough transcript, reflects accurately the gist of the whole conversation and contains actual quotes, both questions and answers." The "gist" part was not corroborated by Russert, Glass or Dickinson, all of whom made a point of saying so on the record. Elzweig responded as much to Mathis, and reiterated his request to be in touch with someone to address the claims. Mathis invited him to email "his findings;" that was the last of it, and further requests for an actual contact were unanswered. Upshot: The NYT is standing by their stories...and their gists. But again, three is a trend — and doctoring tape-transcripts (i.e. the adding in and reframing of questions) is a big no-no.

A note on Russert, whose letter did get published in the magazine...eventually: Apparently Russert fired it off to the NYT in short order, but they did not actually publish it until the June 11, 2006 issue (the original ran in the May 14, 2006 issue). In the interim, Kurtz noted this in his piece (which ran on May 30, 2006): "The Times Magazine has not run the letter, but aggravated him further by publishing one yesterday that mocked 'Tim Russert's refusing to answer insistent, Russert-like questioning about the things he learned from his mother.'"

If you were Russert and you'd answered plenty about your mother, you might be aggravated too. The question is, why isn't the Times? These allegations are pretty serious. We shall see where this leads.