A new report confirms what New Yorkers have known for years: the rent really is too damn high.

Over 50 percent of New York state residents pay rent they can't afford, a 10 percent jump from 12 years before, according to a report from Comptroller Thomas DiNapoli. A staggering three million households in the state pay 30 percent or more of their income on housing.

According to federal guidelines, "Families who pay more than 30 percent of their income for housing are considered cost burdened and may have difficulty affording necessities such as food, clothing, transportation and medical care."

By that same threshold, over a third of New York homeowners can't afford to pay their mortgages.

Also, according to the report, 28 percent of renters and 15 percent of homeowners in New York spend at least half of their household income on housing costs. The U.S. Census Bureau describes these households-- of which there are 12 million across the country-- as “severely cost-burdened.”

The situation is especially bad in New York City, the income inequality capital of America.

In the Bronx, 58 percent of residents pay at least 30 percent of their annual income on housing. The same is true for 53 percent of Brooklyn, 54 percent of Queens, 49 percent of Staten Island, and 45 percent of Manhattan. 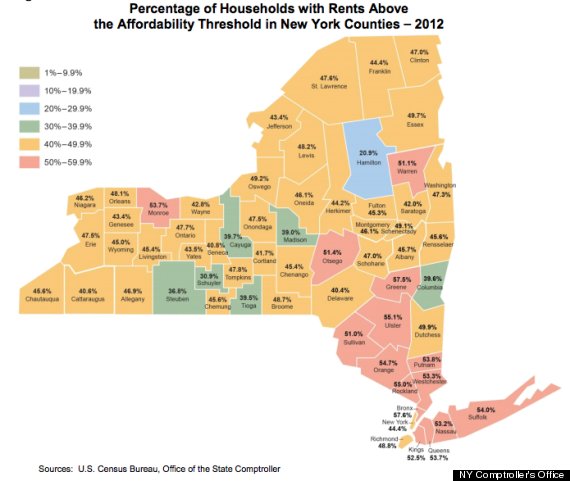