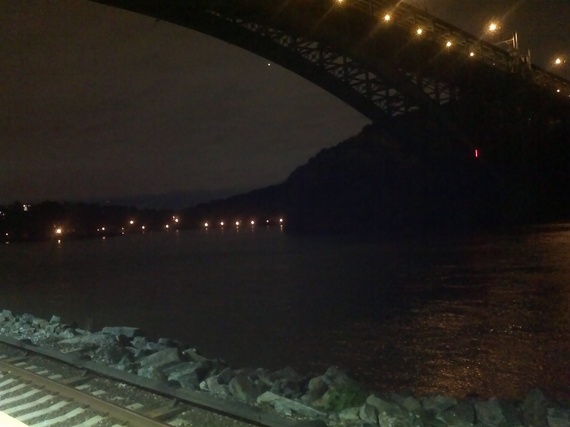 I was walking the other night along the edge of the Harlem River, at or near where they once chopped off a sizable piece of Manhattan and connected it to The Bronx, creating a direct flow of Hudson into Harlem and facilitating the shipping that, while now meaningless, was both lifeblood and raison d'etre of the city. It was dark, at the bottom of a cliff, down by the New York Central tracks which also once defined the greatness of this place.

As I walked the winding hill on a road without a sidewalk, a car came toward me and I crossed to the other side, to walk against traffic and be safer, if not safe, from that darkness which gives cover to a havoc which knows no sun. A sound I did not immediately register or recognize came at me and it almost passed me entirely, but suddenly...

I realized what it was.

The invisible denizen of a parked car, waiting, perhaps, for someone on a train, had protectively locked her (an assumption) doors against the menace of my approach.

Now, in one hand I had my tablet and in the other, a plastic bottle of seltzer. While, hanging from my wrist, was a small plastic bag from Target (admittedly, the logo was on the other side). Also, I am neither black, nor president.

Honestly, it made me feel bad.

Not that I wouldn't have done it too.