These words echoed around the globe this past weekend, as September 26 marked one year since 43 students were forcefully disappeared by government authorities in Guerrero, Mexico.

In New York City, Mexican activist group Somos los otros NY organized a series of events including protests at the Mexican Consulate and at the United Nations Headquarters, a vigil in Union Square and screenings of the new documentary Ayotzinapa: Chronicle of a State Crime, accompanied by art exhibits and Aztec dances. 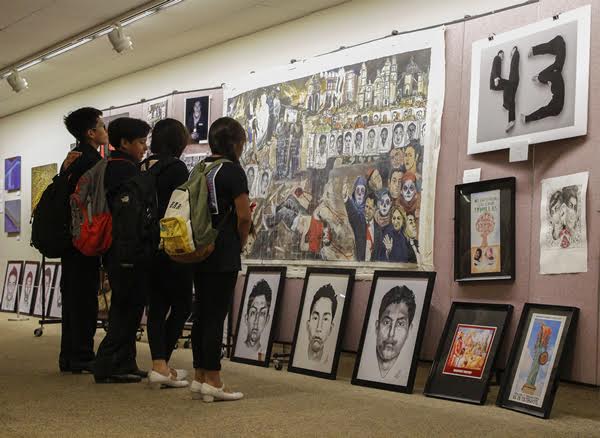 Four young dancers dressed in black with school bags face a wall of Ayotzinapa-inspired art in preparation for a performance paying homage to the 43 students. 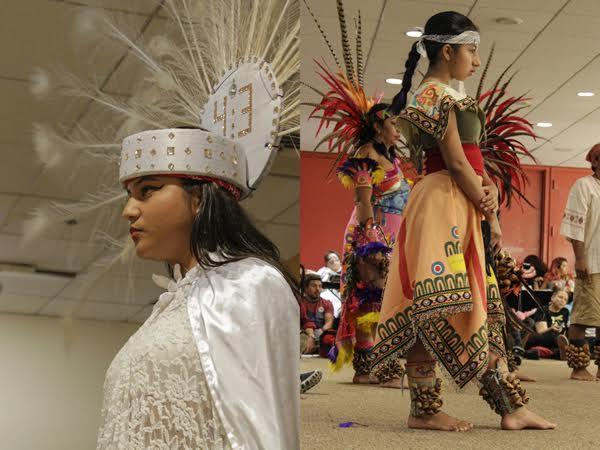 Mexican artists perform at the screening of Ayotzinapa: Chronicle of a State Crime at Saint Peter's Church the day before the one-year anniversary.

"Our ancestors fought for independence, but we have once again fallen under an oppressive government and it is up to us to bring it down," said a member of Somos los otros NY after the artists' performanceson Friday night.

Since mass protests erupted last year, President Peña Nieto's government has been caught in a whirlwind of accusations shedding light on widespread institutional corruption and state crimes. According to a report released by Open Society Foundations last month, there were 19,434 homicides reported in the state of Guerrero alone between 2005 and 2014 and only 9.6 percent of investigations resulted in convictions. Since the Dirty War of the 1960-70s, the lack of institutional accountability has cleared the way for the official use of torture, arbitrary detention and widespread violence against students, women, migrants, journalists, Indigenous communities and civilians, who have been paying the costs of a failed U.S. sponsored drug war. 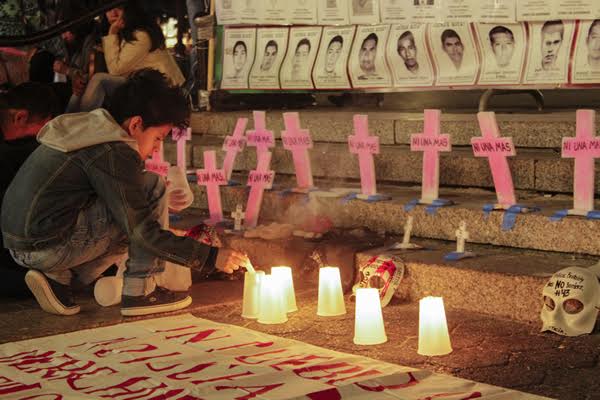 A young boy lights candles at a vigil in Union Square for the hundreds of thousands who have been directly and indirectly affected by years of violence in Mexico. 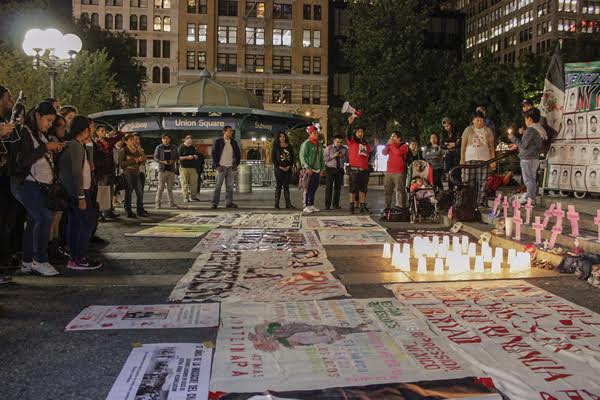 Members of Somos los otros NY chant for justice, as they read the names of the 43 students of Ayotzinapa at a vigil in Union Square.

Following a meeting last week between President Peña Nieto and the families of the disappeared in which the latter put forth eight demands, activists in New York echoed the need for a special investigative unit independent of the attorney general's office to look into the case of Ayotzinapa and implement a mechanism to combat impunity and human rights violations.

Although Peña Nieto ended the meeting by rejecting this demand, he was not able to escape Mexicans' anger and frustration as he traveled to New York City to address the United Nations General Assembly. Members of Somos los otros NY spent Saturday night outside his hotel and gave him a hostile morning greeting that was documented in a video that has reached almost half a million views. The following day, the group bid farewell to the President as he left the U.N. chanting "Murderer!" and demanding to end the Merida Initiative, which has enabled the U.S. to spend $3 billion since 2008 to finance the drug war in Mexico. 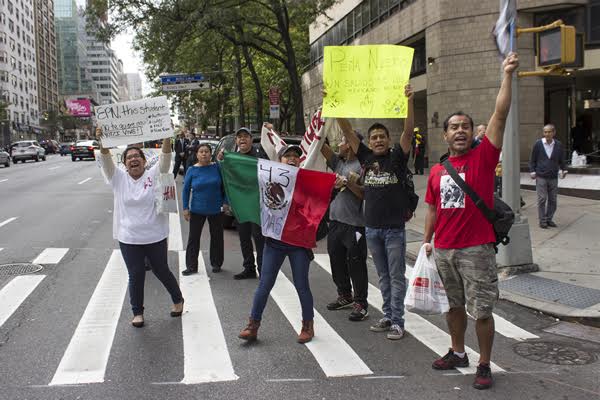 As New York stood with Mexico this past weekend, let's not forget the bigger picture. Ayotzinapa was not an isolated event and as you read this, someone is being forced to leave their home due to gang violence. Someone's relative is being tortured by corrupt police authorities. Someone's body has been found in another mass grave.

As Somos los otros NY said at the vigil, "Let's not forget that we are all students, mothers, fathers, daughters and sons. We are here because there are human rights violations being carried out right now. The drug war is a war on all of us. It's time to stop spending taxpayers' money on a failed war. Enough..."

Laura Krasovitzky is a media intern with the Drug Policy Alliance (www.drugpolicy.org)