New York is the most recent state to pass new rules about how people in prison are counted in the U.S. Census. The law passed on Tuesday evening provides that for purposes of political redistricting, incarcerated persons count as residents of their places of residence prior to incarceration, not as residents at their place of incarceration.

Maryland passed a similar rule in April. Delaware passed one in June. If other states move in this direction, it will become a trend that the Census Bureau cannot ignore. The Bureau's job, after all, is to take the Census. Three states representing 8.5 percent of the US population think something is wrong. As the votes of no confidence continue, the Census may need to change its practice.

First, some history. The Census Bureau's general rule is to count people at their "usual residence," the place where they live and sleep most of the time. People's usual residence need not be the same as their legal or voting address -- but still determining the usual residence for most people is as easy as filling out a form. Special categories present special challenges, however. Sailors in the merchant marine, children in joint custody and long-term commuters all require different rules, and these rules have evolved over time. People in prison are in a category called "group quarters" which includes nursing homes, college dormitories, military installations and other places where unrelated persons live together. As a rule, people in group quarters count where the group quarters are located. For people in prison, that's the prison. In cases like college dormitories, individuals are given forms and invited to fill them out, generally choosing either the college or their family home.

Applying the simple usual residence rule to people in prison might once have been reasonable -- but no more. Nowadays 2.4 million people are in prison or jail in America. Nowadays, more people live in prison and jail than in our three least populous states combined. Organized differently, they would have six votes in the United States Senate, almost votes enough to move from majority to cloture. The Census Bureau rule no longer makes sense.

Demographics make it worse. White men are imprisoned at a rate of 770 per 100,000; black men at six times that rate, closer to 4,600 per 100,000. Regardless of crime, justice or just deserts, the Census Bureau gives this disparity new operational significance. People in prison generally lose the right to vote, but their bodies still count for purposes of political apportionment. The Census Bureau thus counts people out of the urban centers that they usually consider home and to which they will return long before the next census; it counts them instead in rural communities where they have little common interest, and will leave as soon as they are able.

Even more insidious, this population counts in the rural area with the prison but not in the similar adjacent rural without the prison, which enhances the prison region's clout compared to its neighbors. Researchers (and I have long been one of them) call it "prison-based gerrymandering."

In New York State one out of every three people who moved to upstate New York in the 1990s actually "moved" into a prison. Most of them (66%) are New York City residents, but the vast majority of them (91%) are counted by the Census as residents of upstate prison towns. The new bill changes that. (The bill passed the Assembly a while ago and passed the Senate late Tuesday evening; it awaits the governor's signature wrapped in the budget bill). 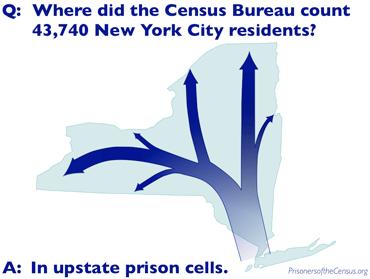 In Maryland, which changed its rule in April, 18 percent of the population credited to Maryland House of Delegates District 2B (near Hagerstown) is actually incarcerated people shipped in from other parts of the state. In Somerset County, 64 percent of the population in the First Commission District is a large prison, giving each resident in that district nearly three times as much influence as residents in other districts.

An especially charming example comes from Anamosa, Iowa. One City Council member was elected with only two votes, his neighbor and his wife. Everyone else who makes up his district is in a nearby prison. Peter Wagner of the Prison Policy Initiative tells the story, part of the Gerrymandering movie due out in the fall.

Yes, there is a solution. For the 2010 census, the Bureau has agreed to release micro-data early enough that jurisdictions who choose can try to correct the problem manually. It's hard work abut it's a step in the right direction. For 2020, the Census Bureau should simply give people in prison a form to fill out, just like they do for the rest of the population. Prisons are highly controlled environments where mail, food, uniforms and work orders are distributed daily. Passing out the Census form would present little problem. As a back-up, official data for address at time of arrest or for supervision upon release are generally available in institutional files.

The Census Bureau has ten years. Three states have already sent the signal. Changing the rule would be a victory for democracy over bureaucracy.