A memo has recently surfaced in which the New York State Department of Education appears to encourage educators to mislead students about upcoming standardized field tests meant to "provide the data necessary to ensure the validity and reliability of the New York State Testing program."

"Students should not be informed of the connection between these field tests and State assessments," the memo reads. "The field tests should be described as brief tests of achievement in the subject." (Read the document below.)

The memo is signed by Candace Shyer, interim executive of the state's Education Department, and was sent to The Huffington Post by Leonie Haimson, executive director of Class Size Matters, a nonprofit organization that advocates for smaller class sizes.

The field tests are a series of standardized exams drawn up by independent testing company Pearson, who won a five-year, $32 million contract to draft New York state tests. Pearson uses these field tests as trials for questions it may use on future exams. More than 1,000 public and elementary schools are scheduled to participate in the field tests, which emphasize science, reading and math.

The text of the memo was posted Friday on the blog NYC Public School Parents under the header "Deception by NYSED about the state field tests?" The blog notes that the memo was sent to high schools by Shyer.

The precise "connection" between the field tests and state assessments is what Shyer expresses in the memo to keep hidden from students, but the reason for the request is unclear. Education Department officials, when asked, did not elaborate on what such a connection might be.

Communications Director Thomas Dunn said in an email to HuffPost that the "validity and reliability of the state exams requires brief standalone pilot testing of questions with New York State students." He noted that the number of students taking the pilot tests amount to fewer than 20 percent of those taking the tests that are already operational.

The memo comes at a sensitive time. Pearson is under fire for repeated mistakes on state exams -- like translation errors and questions with multiple or no correct answers -- that have forced regrading and disposal of test questions.

Resistance to the heavy testing New York students undergo has also generated a wave of opposition groups like Change the Stakes and ParentVoicesNY. Boycott letters, which parents can download and sign if they do not wish their children to take the field tests, are circulating online. Opt-out rates for these field tests could be particularly high because the experimental nature of the tests means their results cannot count toward a student's academic record.

Critics say constantly prepping for the barrage of tests sucks up unreasonable amounts of class time.

"It's like cancer," father Robert Kulesz told The New York Times. "It takes away from all the other areas that are important to our kids, such as arts and physical education."

Others complain that excessive testing leaves students exhausted and unenthusiastic about school. Michelle Israel, mother of a fourth-grade student at Public School 107, told the Times that during last month's standardized exams, her child "came out and burst into tears. Six days of 90-minute sessions was too much for the children. They were fried."

Ms. Israel has since chosen to opt her child out of the field tests. 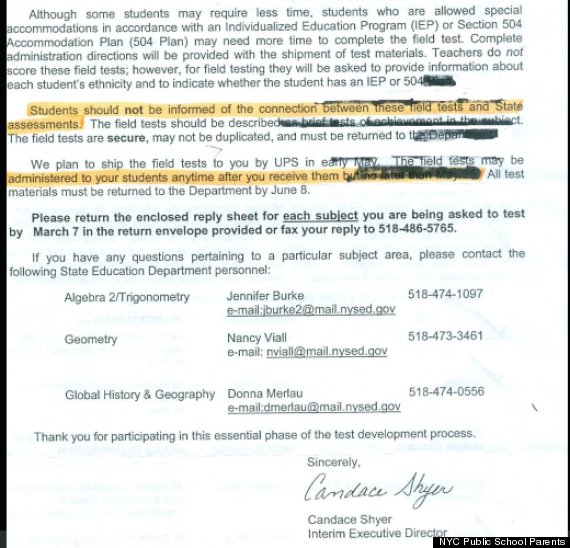