Two weeks ago the New York Times published a guest editorial by Chad Aldeman defending keeping annual testing as a part of the Elementary and Secondary Education Act (ESEA) as Congress is debating revisions and renewals to the changes made in the 2001 No Child Left Behind Act (NCLB). I was not especially impressed. Today, the editorial board itself has chimed in with what could have been a carbon copy of Mr. Aldeman's position. The board implores Congress to maintain annual testing as a key component of federal education law, and, unsurprisingly, I find the arguments less than stellar.

The board covers fairly familiar ground while acknowledging that some aspects of NCLB have been negative, such as the inability of test-based accountability to distinguish between so-called "failing" schools and schools that missed certain accountability targets as measured by tests. The board also acknowledges that testing has expanded to consume too much attention in many states and districts.

However, their recommendation that states "fix this" by "identifying and discarding unnecessary tests and, if necessary, placing explicit limits on how much time can be spent on testing" misses that it is the federal accountability requirements that spawned excessive testing and test preparation in the first place. It is an act of fancy rhetorical footwork to blame states and municipalities for an over focus on standardized testing when federal requirements have incentivized that very focus, first with threats to label schools as failures under NCLB and then with the Obama administration pressuring states to use discredited statistical models to evaluate teachers as part of Race to the Top. The "wave of over-testing that swept this country's schools during the last decade" is the responsibility of the federal government, and it is up to the federal government to fix it.

The board repeats claims familiar in reform circles that annual testing is needed because if we do not test every child in every year, "parents would never know how well their children were doing." This claim remains staggeringly bereft of imagination every time it is written by another person or organization intent on seeing annual testing maintained. Set aside the reality that a child whose parents or guardians need a standardized test to know how she is doing in school is a child with much bigger problems than whether or not her state administers an annual test, and consider how many, far more meaningful ways, there are to communicate how a student is doing in school. Annual tests come late in the year, focus upon content that does not indicate creativity and problem solving, and report results far too late to be used for the benefit of individual students. Fortunately, we have myriads of ways to help teachers assess students, use that information to improve instruction, AND communicate with parents. There are teacher designed tests, portfolio assessment systems, project based learning, and computer delivered adaptive assessments that give immediate, formative feedback. Every single one of these ideas will let parents know how their children are doing, and some of them could readily be pegged to provide comparisons to other students if absolutely deemed necessary (doubtful). How a mass standardized test every year would remain necessary with a collection of tools like this instead of a carefully sampled exam reported every couple of years is beyond me. Regardless, the Obama administration invested $330 million to write new, even bigger, standardized exams for the Common Core State Standards.

The Times board also states that "national test data clearly show that since the unpopular No Child Left Behind Act was signed in 2002, academic performance for the country's students has improved and achievement gaps between white and minority children have narrowed." The implication here is that we owe that to NCLB, an assumption that is made problematic by taking a wider view of achievement history as reported by the National Assessment of Educational Progress (NAEP). It is true that the gap between white and black 13 year-olds, for example, in mathematics and reading closed from 32 points to 28 points and from 29 points to 23 points respectively in between 1999 and 2012. However, longer term trends show much more dramatic gains in the 1970s and early 1980s:

The Times is praising an anemic record of "effectiveness" for test-based accountability, and it fails to consider what might contribute to the steady and significant improvement in the 1970s and early 1980s and what might account for how those gains leveled off or decreased in the late 1980s and 1990s. Consider that the 1970s saw the last major effort by politicians and courts to expand desegregation of our schools by placing school districts, including many in northern states, under court orders to integrate their schools systems. This effort peaked in the 1980s and since then, schools have become re-segregated in no small part because of white flight. Boston, Massachusetts, which had a particularly contentious relationship with court ordered integration, saw the percentage of white students in public school plummet by more than 40 points between 1970 and 1990, a change that cannot be explained by simple increases in the minority population.

White flight was also a proxy for the middle class abandoning urban communities, and in the 30 years between 1980 and 2010, the percentages of people who live in housing tracts dominated by their own income levels has risen nationwide. The change in the Residential Income Segregation Index (RISI) is in the double digits for many of our most populated urban areas: 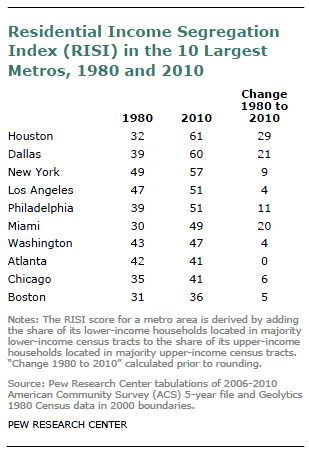 So here is what the editorial board of the Times fails to consider: Achievement gaps on the NAEP narrowed dramatically during the 1970s and early 1980s when the nation was still pursuing policies of deliberate integration. However, the cumulative impact of white and middle class populations leaving cities in the 1960s, 70s, and 80s led directly to re-segregation of our communities and schools, and the trends since 1980 have been towards greater and greater income segregation. Today, more than 50 percent of students attending public school qualify for free or reduced lunch programs which means that, because of the previously mentioned trends, more and more school districts have higher concentrations of poverty. We also know from analysis of the international PISA exam, that students in United States communities with different levels of poverty scored very differently on standardized exams.

Given this, the fact that during the 90s the gap in achievement measured by NAEP increased only slightly in math and increased in reading but began to narrow again BEFORE NCLB should be celebrated as an achievement of hard working schools facing deteriorating conditions within their communities.

We do not. And as Kevin Welner and William Mathis of University of Colorado at Boulder remind us in this policy memo, what we need is "sustained, fair, adequate and equitable investment in all our children sufficient to provide them their educational birthright..." That will not happen while high stakes testing is driving our education system.