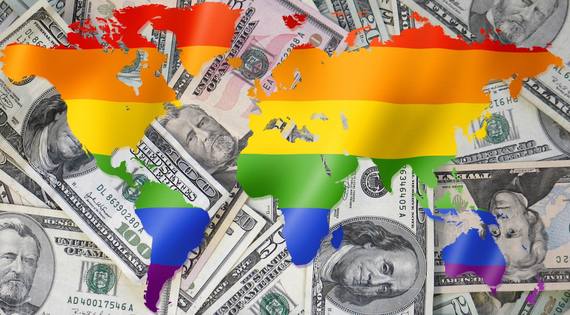 This week the conservative Family Research Council (FRC), took aim at the US policy of supporting LGBT groups abroad. The FRC's statement came a few days after presidential candidate Hillary Clinton released her pledge to increase US funding of LGBT groups. Conservative websites and politicians echoed the FRC message that Obama, who has given LGBT groups a whopping $700 million since 2012, was promoting homosexuality and garnering ill-will for the United States. The problem with these claims is that the US has never given LGBT groups $700 million.

In actuality, US support for LGBT issues is probably about one percent of that figure. As of 2011, the year that the Obama administration launched its global LGBT initiatives, US funding was very small. A 2010 survey of global funding found that the total amount of funding by all governments was less than $13 million. Sweden, Norway and the Netherlands topped the list of governments. This US did not give enough to be listed in the report.

In late 2011, President Obama issued an executive order directing US agencies to include LGBT issues in their overseas activities. At the same time, Secretary of State Hillary Clinton announced the formation of the Global Equality Fund. Since 2011 that fund has distributed $7.5 million, much of that money coming from other governments, private corporations and private foundations. While the US government funds HIV programs for vulnerable and marginalized populations in Africa, very little of that funding goes to advocacy for LGBT human rights. In fact, the President's Emergency Plan for AIDS Relief supports LGBT human rights by channeling its funding through the State Department's Global Equality Fund established by Clinton. The US Agency for International Development administers its own LGBT fund, called the LGBT Global Development Partnership. That fund distributes about 5 million a year, half of that amount coming from private donors.

In sum, the US government probably spends less than $7 million of its own dollars per year on global LGBT issues. That amount is roughly half the annual budget of the Family Research Council. The FRC and its partners inflated the actual level of US giving by a factor of one hundred. Why does the amount of money matter? Because 700 million dollars represents an enormous level of support --- the kind that garners headlines in the New York Times.

In the case of LGBT people, the claim that LGBT groups have received $700 million builds a myth of affluence. The stereotype that LGBT people are rich, well-funded, well-educated and selfish has been used by those opposing LGBT equality as a reason to deny LGBT people their human rights. President Museveni of Uganda has written on his view that people are recruited into the gay lifestyle by monetary bribes and financial enticement. US Supreme Court Justice Scalia has reasoned that LGBT have high disposable incomes and are therefore undeserving of constitutional protection. When officials in the World Bank suggested that LGBT people should be part of its anti-poverty programs, critics responded that LGBT issues have no role in the World Bank's mission. All these statements fly in the face of the growing evidence that LGBT people face wage disparaties and poverty at levels higher than their non-LGBT counterparts.

As a matter of international politics, the myth of affluence is used to discredit genuine efforts of LGBT people in countries which receive foreign aid. The narrative, echoed by the Presidents of Nigeria and Senegal, is that LGBT people are a product of western governments. As a political tactic, this strategy focuses attention on foreign governments and ignores the existence of LGBT Nigerians and Senegalese who themselves are advocating for their own equality.

The Family Research Council cites the New York Times as the basis for the $700 million figure. Ironically, it appeared in an article entitled "U.S. Support of Gay Rights in Africa May Have Done More Harm Than Good," (December 21, 2015, A1). The author reports "[s]ince 2012, the American government has put more than $700 million into supporting gay rights groups and causes globally." He does not provide a source for the figure. Nevertheless, this figure serves as the article's primary premise. This is not merely a discrepancy. The difference between 7 million and 700 million is the difference between reality and myth.

At any level, US support for LGBT rights overseas brings complications. US funding agencies constitute one of the largest, most powerful bureaucracies in the world. However, African LGBT groups have developed the experience, skill and clarity to deal with the behemoth. Part of this is the constant challenge of recognizing the difference between donor priorities, formed in the context of western notions of gender and sexuality, and the needs experienced by the sexual and gender minorities living in diverse cultures.

The burden of this struggle on LGBT activists in Africa is worth coverage. But it is a different story than the one told on the front page of the New York Times. Unfortunately, the story that was printed will help drive the myth of affluence as it is told by those who seek to oppose LGBT human rights.