This past Sunday, in presidential-election swing states across the country, the New York Times came bundled with a dvd of the documentary "Obsession: Radical Islam's War Against the West," a controversial film on the threat terrorism. The documentary is set for release to retail outlets this week -- the anniversary of the 9/11 attacks -- but has been shown at college campuses for nearly a year now, presented largely by Jewish student organizations and as part of Islamo-Fascism Awareness Week, the national "conservative campus protest" organized and sponsored last fall by militant right-wing author David Horowitz's Freedom Center.

The dvd was an "insert" with the Sunday newspaper, contracted no doubt with the New York Times marketing department as an advertisement the way coupons for local stores are often inserted in nationally distributed publications. The editorial side of the paper likely had little or no knowledge that the controversial dvd would be included with the paper. The provenance of the film remains somewhat mysterious. The film website lists only the filmmakers, Wayne Kopping and Raphael Shore. The dvd packaging included with the Times lists the producers as Peter Mier and Raphael Shore, and states that the project was "conceived by" Peter Mier. At this point, it is unclear who planned and paid for the film's bundling with the New York Times and its distribution to homes in election-year swing states. An entity called "The Clarion Fund" is listed with contact information below the credits.

Arriving at the doorstep together, the package-- New York Times with the Obsession terror dvd-- was alarming. The film is made to appear as a news-style documentary and includes splashy sell-lines that shout "As seen on CNN and FOX News by more than 20 million viewers worldwide." Indeed, the incendiary packaging is a reflection of the contents of the film. The "O" in "Obsession" is formed with the Islamic crescent moon and a star, and the closing "N" is tricked up with a silhouette of an automatic rifle. Soft focus-images of Middle Easterners, the World Trade Center, a firefighter on a ladder and the American flag all bathed in golden light.

After conferring with students from several universities who were concerned about both the ignorance about the objectives of Islamic fascism among their fellow students and also the "unholy alliance" between campus leftists and jihadists seeking to undermine the War on Terror, the Freedom Center has launched a Terrorism Awareness Project. This Project will provide conservative students with an intellectual toolkit containing all the elements of the truth about jihad: a speakers' bureau featuring figures such as Steve Emerson, Daniel Pipes and Robert Spencer; DVDs of films such as "Obsession" that dramatically underline the threat we face..."

On the packaging included with the Sunday Times, in small print, beneath the dvd, there is a list of all the publications that included the supplement with delivery. Designed to "change the way you look at the world," the film was bundled into newspapers in Ohio, Pennsylvania, Michigan, Colorado, Iowa, Florida, Wisconsin, Nevada, New Hampshire and Virginia. It also came with national publications like the Chronicle of Higher Education, the Wall Street Journal and the Jewish World Digest.

In one light, the film can be seen as a study in unwitting irony. In discussing how terrorists are recruited, interviewees in the film relate that Islamic terrorism is made possible by politically whipped up fear. One talking head says: "One of the main ways to get people to be willing to fight and endanger their lives and to hate the west is to present the war as an act of self defense..." Another one says: "There has to be a good reason to do jihad... the best reason is to defend themselves. There is an enemy out there who wants to get us. America wants to get us. Nothing could be done wrong by Arabs. It's always the west. " 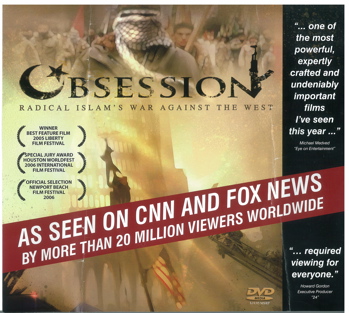 In effect, the documentary flips these comments on their head. Aimed at voters in the battleground states the week of September 11, the film is more than a scare tactic or a campaign ploy. It smacks of classic propaganda, boosted through this clever marketing deal by association with the authority of the New York Times brand. The point is to frighten viewers and, it seems clear, to frighten American voters across the country in order to raise security concerns ahead of all other issues in the election.

As witnessed in the Iraq, calling a nation a democracy doesn't make it so. At a time when more and more hard-working Americans are losing their homes than at any time since the Depression, when American citizens cannot afford health care, when wages are not keeping pace with the cost-of-living, when jobs that built the great middle class have been shipped overseas, and when speculators raise the price of gas while reaping record profits -- the Republican Party (or those who now control the Republican Party) are doing everything they can to distract voters from the issues that matter.

The election this year is a fight to protect democracy as we know it. We are responsible for our democracy; it will last only as long as we are good stewards. We face dangers from "terrorists" within, people who will stop at nothing to hold on to power. The policies of the last eight years are moving us more and more into a nation of two distinct classes: the wealthy and the poor, with the middle class falling into poverty. The American taxpayers will now bail out Fannie Mae and Freddie Mac while the executives who engineered this mess are giving themselves multimillion dollar severance packages--without conscience. McCain-Palin's former economic advisor, Phil Gramm, helped engineer the de-regulation that is responsible for home foreclosures.

American citizens have been the victim of an elaborate and well-planned con game for the past eight years and the game will be in full play this week. Anytime American citizens can be frightened and manipulated into voting against their best interests, they have been conned.