A class action federal lawsuit is being pursued by egg "donors" for what they call "price fixing." The lawsuit challenges the guidelines prepared by two professional organizations that set suggested limits on payments for egg "donations." 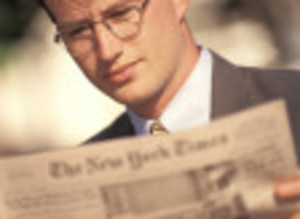 The mega-billion-dollar infertility industry argues that, regardless of the discomfort and risk involved in hormone injections and egg extraction, paying high compensation rates for these procedures would make it too tempting for indigent women to make unsafe decisions. It's an odd argument. As The New York Times points out in its opinion regarding this case, industry practitioners could ensure that women who come to them for this purpose are properly informed of the risks. More importantly, however, is that even the current and suggested limited fees could exploit indigent people. That is why we as a society ban the sale of organs.

Organ sales are forbidden. We do not -- in the case of organs -- allow people in need to earn money selling organs such as kidneys simply because they choose to do so. We do not say that it is alright at one level of compensation but not at another. It is forbidden, despite the fact that an organ transplant is a life-and-death necessity, unlike the desire for a child. Further, a transplanted organ never becomes an independent being who cares where it came from, nor does it long to know who it looks like or where it got its inherited traits and tendencies.

Also unlawful is buying and selling any human being, including a baby. Yet we allow all "the ingredients" to make a baby to be bought and sold.

Except as above, The New York Times opinion in favor of the women's right to charge whatever they choose, or can get, by selling a future offspring dangerously misses the mark. By supporting the sale of human gametes, The Times is condoning the sale of human beings; something we in this part of the world have, sadly, come to accept as "normal."

In supporting this lawsuit, The Times condones a demand-driven marketplace for the creation of children and opens the floodgates for the propensity to create designer babies, with prices based on preferences for gender, race, ethnicity, eye and hair color, height and weight, and education of the donor. This is not futuristic science fiction. Sperm banks feature the physical characteristics of their "donors," as well as their level of education. Advertisements for egg "donors" are prevalent on college campuses. Even adoption prices vary based on race, age, and health of the child.

Infertility, including that which is caused by lifestyle choices such as delayed childbearing, and same-sex desire for parentage are viewed with total and utter sympathy and compassion. The longing for a child is treated as justification to do anything to fill that desire. We have become so blinded by our concerns for the childless that the United States government turns a blind eye and refuses to investigate kidnapping when committed for the purpose of adoption, as in the case of Karen Monahan.

There is an assumption that strong desire and motivation coupled with financial means equates to "deserving" a child. Our capitalistic mindset easily accepts entitlement to purchase whatever one's heart desires, without seeing how vile it is to commodify and sell human beings or the precious elements necessary to produce one. We create an end-justifies-the-means attitude toward obtaining or creating children by claiming it is in their best interest to be raised in a more affluent family, when ironically, people are fundraising online for adoption fees and reproductive purchases.

Those who are spending tens of thousands of dollars to adopt -- rather than help a child from foster care -- or who buy genetic material, frozen embryos, or rent wombs, may make loving, caring parents. But there are no guarantees, or even screening. There is no "right" to a child, and those who utilize these services are thus no more or less "deserving" of a child than anyone else.

While adoption purports to be in the best interest of the child, reproductive technologies make no bones about the fact that the only ones being served are the would-be parents.

Euphemistically called "donors," those who sell their eggs and sperm do so under a veil of anonymity. Anonymously harvested human eggs may in some cases be fertilized by anonymously purchased sperm or by a man who intends to parent. The fertilized embryo is then used to impregnate surrogates who are hired to incubate the embryo producing a child denied half or all of its genetic history. In favoring the lawsuit, The Times disregards the risk involved in the anonymity of these transactions.

Knowledge of family medical history is critical for proper diagnosis as well as for making life-saving prophylactic decisions such as that made by Angelina Jolie based on knowledge of her mother's health history.

The AMA is clear that with genetic medicine explaining more diseases, it is "extremely important" to gather "a complete and accurate family medical history". 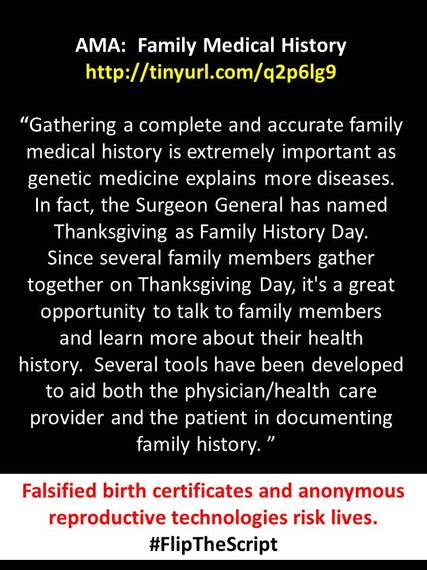 Health care professionals have known for a long time that common diseases - heart disease, cancer, and diabetes - and rare diseases - like hemophilia, cystic fibrosis, and sickle cell anemia - can run in families. If one generation of a family has high blood pressure, it is not unusual for the next generation to have similarly high blood pressure. Tracing the illnesses suffered by your parents, grandparents, and other blood relatives can help your doctor predict the disorders to which you may be at risk and take action to keep you and your family healthy.

An article in the Journal of Genetic Internal Medicine, 2014, entitled "Reconsidering the Family History in Primary Care" concludes: "The patient's family history remains a critical element in risk assessment for many conditions..."

The family history is the most important tool for diagnosis and risk assessment in medical genetics, and promises to serve as a critical element in the use of predictive genetic testing in primary care. .... ...

The ACOG, American College of Obstetrics and Gynecology, agrees, stating:

The American Academy of Pediatrics, together with the Genetics in Primary Care Institute and the Pediatric Improvement Network, state:

Family history information can provide a full picture of the health of a patient and their family.... it will allow [health care providers] to provide better care for the patient.

Anonymity in commercialized reproductive technology denies all of this vital information to the children being produced.

The New York Times arrogantly, or ignorantly, ignores all of these medical authorities by supporting the anonymity inherent in the world of infertility "solutions." The Times likewise ignores the half century of state-by-state battles of adopted persons to regain what is rightly theirs - a birth certificate naming their progenitors and unlocking the key to their biological heritage.

The Times also ignores the plight of the children created via "donor" egg and/or sperm who desperately want to know their kin. Wendy Kramer is Co-Founder and Director of the Donor Sibling Registry (DSR) which has 47,600 worldwide members. She writes:

While there may be some donor-conceived people who don't have a desire to seek out their half siblings or biological parents (just as in adoption), many more do indeed desire to search for and to find their relatives. Some for medical reasons, and some also feel a deep and painful loss from being disconnected from their genetic kin.

Focusing on the falsification of birth certificates of donor-conceived persons, Kramer writes:

Ignorance of biological ancestry has had devastating consequences for some. In the U.K. in 2008, twins that were separated and adopted at birth unknowingly married each other. This year, a Brazilian couple found out after they were married that the same biological mother had abandoned them as infants. Random meetings amongst half siblings are not uncommon, as many have reported in the news, and on the DSR. One mom realized that a distant relative, one whom she and her children had spent time with at family gatherings, had donated sperm and was in fact the biological parent of her children....

Diseases such as NF1, Lynch Syndrome, Cystic Fibrosis, and HCM, a sometimes-fatal genetic heart condition, have all been reported on the DSR, and have been written about in the media. Hundreds of other medical conditions have also been reported and shared amongst DSR families and the sharing of this type of information has saved lives. The problem is that the DSR is a voluntary website, and in most cases, all families will not be listed and contactable.

No increase in payments to so-called "donors" should be considered without first taking into account their contributions to the human beings they are creating - beings who grow into autonomous citizens with needs and rights of their own that are being arbitrarily denied.

Children are not possessions, nor should they be treated as merchandise manufactured to order. Any and all regulations regarding their creation and custody must put their needs and rights first and foremost. Anonymity is unsafe, unjust and unacceptable in human creation and child custody transfer.

Selling human eggs is baby selling, and doing so anonymously risks the health and well-being of children who grow into adults with rights of their own and a need to know their genetic history.