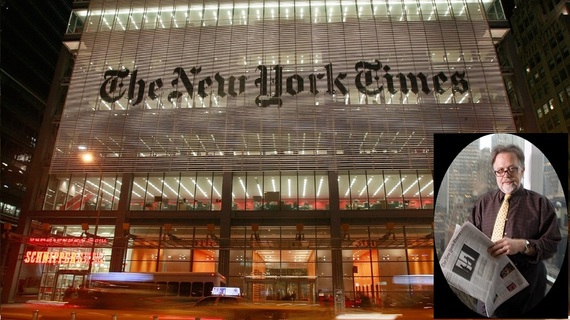 As someone who has often found fault with The New York Times in the past, I can tell you that Ken Kurson's cover story in the Observer today does not reflect the reality of the paper I read every day.

Kurson's attack on the editorial page editor Andrew Rosenthal and his so-called "tyrannical regime" is based on 24 anonymous interviews with Times staffers -- always a dicey proposition.

But Kurson, a former Rudy Giuliani staffer who apparently disagrees with Rosenthal's liberal positions, does not really quote any objective journalism critics as to the quality of the editorial product. Where is his editor? Oops, he is the editor.

I can say with confidence that they are better than they have ever been (I never used to read the editorials in the past).

Today's editorial on Obamacare, dealing with possible job losses, is a perfect example of turning conventional wisdom on its head.

On Morning Joe this morning, the Times editorial actually changed Joe Scarborough's mind on some issues (not easy) -- for example, the fact that Obamacare might be good for entrepreneurs, because workers don't have to stay with one job simply because of health benefits.

An original thought, which none of the other newspapers pointed out.

Andrew Rosenthal has done a fantastic job in coming up with interesting ideas and analysis. I love his column and find that he is a much deeper thinker than his father ever was. (I knew his father, whom I had a disagreement with, but I have never met Andrew.)

The Review, also under Rosenthal, is also better than it has ever been. It used to be dull but is now thought-provoking and a must-read. Its main stories often set the agenda for the nation.

The idea that the editorial pages and Review are not read (which the Observer asserts) is ridiculous. Looking at the most-emailed lists, it's obvious that the op-ed pages, and the writers there, easily produce some of the most emailed articles in the paper.

Of course, many old-time reporters will resent the extra time and space given to editorials and analysis, but this is how the newspaper business needs to evolve.

Everybody knows instantly what happened today; they need to know what it means. This is what Rosenthal is giving us, and we are fortunate to get it.

I curse out the Times every morning about one stupid thing or another that they have done or written.

But, judging the paper as a whole, I see that The New York Times has most consistently set the standard of what newspapers should aspire to.

One particular three-part series by William Glaberson about Bronx courts, "Justice Denied," is one of the most incredible stories ever written.

Nobody cares about places like the Bronx anymore. It is a no man's land, a media dead zone. There are no advertisers or readers there (save for a few in Riverdale or Fieldston).

But the fact that The New York Times would devote so much time and effort to exposing an institutionalized acceptance of an odious situation -- court delays of five years -- in such pressing financial times shows why The New York Times and other print media are so necessary to a vibrant democracy and a well-informed electorate.

People need to know about this, and without newspapers things will only get worse.

The New York Times is a national treasure, and it is changing along with the times.