Many of the most acclaimed television dramas on Sunday nights are historical in subject matter, award-garnering period centerpieces with all the sexuality and bloody mayhem you've come to expect from premium cable -- all the details left out of your high school textbooks.

But it isn't enough anymore just to evoke a vaguely historical tableaux. The hottest trend in history TV isn't gore or nudity. It's accuracy. Fact-checking has become a buzzword in today's politics, but it's become increasingly important in modern drama as well.

Fans of New York City's rich past have seen three of its most tumultuous decades represented in television series this year. And each show is bringing a different approach to filling out the historical contours of this ever-changing metropolis.

BBC America's freshman hit Copper ventures into New York of the 1860s, and in particular, the vicious neighborhood of Five Points, a notorious slum known as a cesspool of crime. Its shady parlors and roughhouse dives have previously been explored in Martin Scorsese's Gangs of New York, a fictional adaptation of a New York classic by Herbert Asbury.

It's a difficult place to get right. The common notions of Five Points are based on early materials that are heavily slanted and sensationalized. Newspapers of the day highlighted its most sinful corners as a way to shock and scandalize readers. As early as 1842, Charles Dickens wrote of the neighborhood: "Debauchery has made the very houses prematurely old."

Social reformers took a less exploitative view, preferring to focus on the mass poverty and moral decrepitude. By the time Asbury came along with his Gangs of New York, Five Points was the pure embodiment of the bad American neighborhood.

Copper finds a middle ground, approaching Five Points in a fashion similar to a crime procedural and making broader observations by contrasting it with the encrusted society of Fifth Avenue. So far, actual historical figures are mentioned only in passing, but the show is gaining steam the closer it entwines its characters into an actual event -- one that occurred in November 1864, a devastating terrorist attack on the city. (I won't spoil any further, but for more information, we talk about this dramatic catastrophe in our free podcast on the Hoaxes and Conspiracies of 1864).

The show could use a bigger budget next season -- it sometimes looks like it's presented on a generic Wild West set -- but the stark tone is near perfect. Maybe we'll even get real-life people next season. Some Boss Tweed, pretty please?

Boardwalk Empire, this season set in 1923, has never shied away from using historical figures, especially the sinister ones -- Al Capone being the most prominent example. And now that Nucky Thompson (Steve Buscemi) has made a deal to ship liquor to New York for real-life crime lord Arnold Rothstein (Michael Stuhlbarg), the Atlantic City-centered drama will now be taking frequent trips to a very rotten version of the Big Apple.

I like what we've seen so far -- paying for bribes at the tony Hotel Astor in Times Square, heroin deals gone wrong on the Upper East Side, and love nests for Nucky's vaudeville mistress on the Upper West Side. Those vices, occasionally tempered with scenes of church and charity in Atlantic City, seem scandalously unrestrained in this version of Manhattan thus far.

The Scorsese-produced gangster drama is actually filmed in New York, at studios in Greenpoint, Brooklyn, so they will hopefully exploit the actual streets of the city in future episodes. And oh the deep well of gangsters to choose from!

Despite that deficiency, Mad Men continues to be the most assiduously researched and painstakingly accurate show on television, possibly ever. The show's famously rich subtext derives much of its potency from detailed and often obscure historical references.

Season 5 took us into New York of the years 1966 and 1967, inventing fascinating ways to link storylines into the city's restless counterculture, from the first Hare Krishnas to a little parlor experimentation with LSD. The show didn't just throw in a stray reference for color; almost every detail -- from a casually mentioned magazine spread to the location of a rock concert -- underscored a statement on the decade that the writers were trying to make. And they illustrated how increasingly removed the ad men of Sterling Cooper Draper Pryce were becoming.

When the season was originally broadcast this past spring, I followed along via Twitter, throwing out facts and trivia based on what was happening on the show. Season 5 was so dense that I usually had to watch the show a second time, mostly to marvel at how air-tight its details were.

It's a lofty bar Mad Men has set. Will Sunday night's other historical entries try and match it? (By the way, I'm doing the same for Copper and Boardwalk Empire this year. You can follow along with me on Twitter at @BoweryBoys.)

You can find my previous columns on the historical details of Mad Men on my blog. 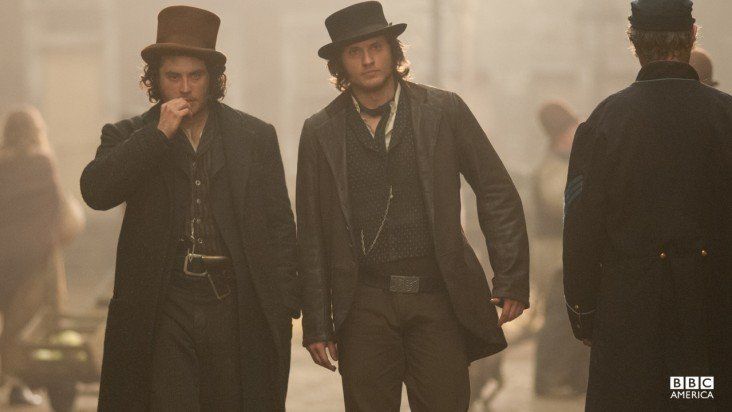