Channeling the iconic image of Dr. Martin Luther King, Jr. linking arms with fellow civil rights activists during the march from Selma, Alabama to the state's capital in Montgomery, The New Yorker has made a powerful statement on race relations with a new cover, unveiled Friday.

“It struck me that King’s vision was both the empowerment of African-Americans, the insistence on civil rights, but also the reconciliation of people who seemed so hard to reconcile,” Barry Blitt, the artist who created the image, said in a statement. “Like Trayvon Martin and Eric Garner, Michael Brown and Officers Wenjian Liu and Rafael Ramos, Martin Luther King was taken way too early. It is hard to believe things would have got as bad as they are if he was still around today.”

Running the week of Jan. 26, the issue comes at a time when the Selma Voting Rights Campaign is back in the news. 2015 marks the 50-year anniversary of the Alabama protest marches, and last week, "Selma" -- Ava DuVernay's film honoring the events -- was largely snubbed by the Academy Award committee, sparking outrage from supporters.

Take a look at the cover below: 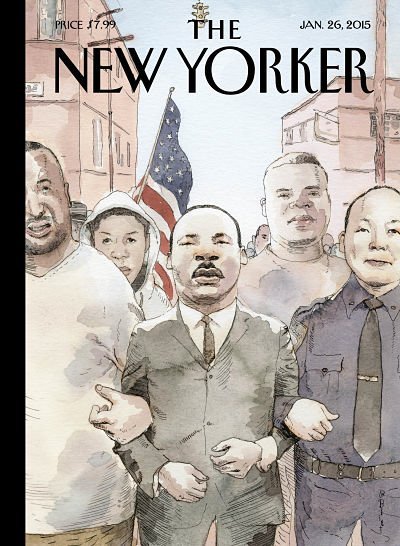