For those wondering if President Obama will watch the Super Bowl on Sunday, the New Yorker's latest cover offers some insight into the big game the President currently has his eyes on.

The cover — drawn by Barry Blitt and entitled "The Big Game" — shows the President watching a football game with GOP candidates Mitt Romney and Newt Gingrich. Obama looks on energetically, wearing a big smile and clasping a football and beverage. Romney and Gingrich, who are in the midst of an obvious altercation, wear the same uniform and appear to be on the same team. Romney is shown tackling Gingrich, who is punching up at Romney's face.

Blitt is also the artist responsible for the controversial 2008 New Yorker cover, in which then-candidate Obama and his wife Michelle are shown as Osama Bin Laden-loving, fist pumping, flag burners. Blitt also illustrated the 2011 cover depicting Obama walking on and then falling into water. Obama reportedly asked Blitt for a signed copy of the critical cover. 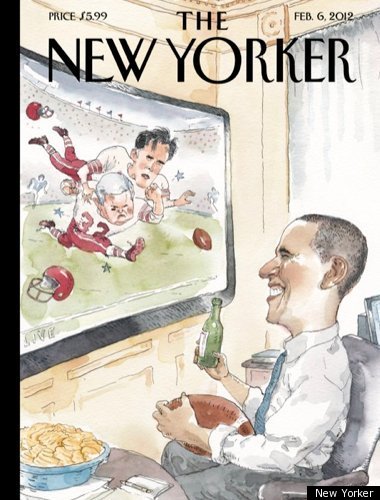